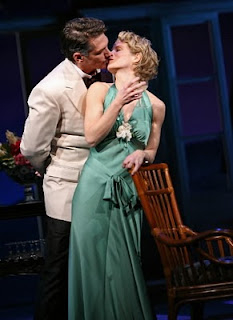 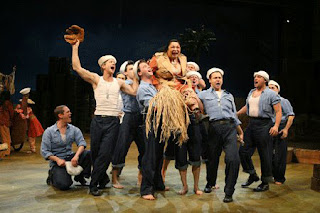 CONFUSED BY PARADISE
by Douglas Messerli

A hundred and one pounds of fun,
That’s my little Honey Bun.
Get a load of Honey Bun tonight.

If in my statements above I sound highly critical of Rodgers and Hammerstein musicals, I should assert that my feelings about their work were not always so ambivalent. As a child I was quite enthusiastic about their early musicals. In 1956, for example, my parents took me, without my six-year-old brother and three-year-old sister, to a drive-in movie showing of Carousel. Despite what I thought—even at nine years of age—was a rather kitch-ladden opening scene—with Billy Bigelow shining up the stars of heaven—I loved the movie, particularly since it presented a tragic viewpoint rather than a primarily comic one. Although I had difficulties imagining how a petty thief who commits suicide had gotten through the pearly gates, I recognized in his early “Soliloquy,” that Billy basically was a loving, well-meaning being who simply wound up in the wrong company. What I didn’t know then was that in the original Molnar play, Liliom—upon which Carousel was based—Billy was condemned to Hell for slapping his daughter, even though, as in the musical version, she claims that the slap felt like a kiss.
Carousel clearly was an important influence on my continued love of American musical theater. So enchanted was I with musicals that the same year, having glimpsed the trailer of The King and I in the Paramount Movie Theater in downtown Cedar Rapids (a building flooded this year by the Cedar River), for years I was convinced that I had seen the whole movie—such was the power of even a few scenes.