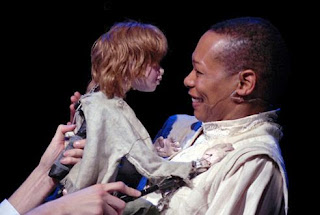 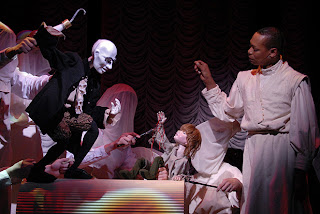 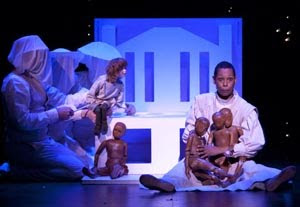 THE LOCKED WINDOWS
by Douglas Messerli

Julie Archer and Lee Breuer (co-creators) [based on the novel Peter and Wendy by J. M. Barrie] Peter and Wendy, presented by Mabou Mines at The New Victory Theater, New York / the production I attended was on May 6, 2011.

On May 6 I had tickets to see Tom Stoppard’s play Arcadia, but when I heard of the short return of Mabou Mines’ Peter and Wendy to The New Victory Theater (running from May 6-22), I could not resist the opportunity to see the play, and joyfully changed my plans.

In a strange way, although these British-based works are entirely different, there is an odd connection between the two in that they both episodically, often without coherent connections between changes of characters and place, present an kind of Arcadian or pastoral world in which things were seemingly simpler—although the characters in both are faced with complexities that they might not wish to face.

In Peter and Wendy those complexities have to do with their childhood vision of reality. But unlike the earlier play and novel, Peter Pan, Barrie’s 1911 Peter and Wendy presents a less sweeter and simpler vision of things. It is not simply that Peter, Wendy, her brothers and the other Lost Boys who make up Peter’s band perceive things as children might, but that they sometimes all too readily have perceived the traumatic and threatening issues of the adults and the society that surrounds them. In this version, Peter is not just a child who refuses to grow up, but in his kind of wise puppet guise, is—a “puppet” to his own childish instance and the longings that go with that. Like a stubborn and undeterred brat, as spoken by the marvelous narrator Karen Kandel, he is, although always fairly charming, at times also a selfish bully of contradictory forces.

While the New York Times critic saw Kandel’s presentation of these marvelous puppets as too sweet, I saw them quite differently, as forces representing an adamant refusal to join in the Victorian society around them, and, in that sense, they are not at all innocent boys and girls living in a time outside of reality, but slightly terrifying rebels against the transformation of Victorian society in a gentler and more civil society.

Peter may offer these timeless children adventure, but those adventures, the battles with the absurd Hook and his gang, are not unlike the ridiculous wars fought through the century. Wendy may be part and party to the fun, but she is wooed away from her home less as an equal adventurer than as a mother to all the boys, a mother who in her nurturing and care for her “children,” has little room to truly discover herself, more indentured than adventured.

Even Hook, in this version, is less of a free adventurer than he is caught up in the societal whirl, a man who wants to become a figure of style, a class-inspired man of aspirations. The wonderful Croc is a fearful villain less because of his potential to feast on Peter Pan’s boys, than he is a figure caught up in the whirl of society, hilariously presented as a perpetually tangoing beast, unable to free himself from a kind of infatuation with his own tail/tale.

All of this darkness is reinforced by the Celtic songs composed by Johnny Cunningham and performed by Aidan Brennan, Tola Custy, Steph Geremia, Alan Kelly, Laoise Kelly, Siobhan Miller, and Jay Peck; these songs are not your children-friendly hymns such as “I’m Flying,” “I Gotta Crow,” and “I Won’t Grow Up,” but rather intimate the real roots of J. M. Barrie’s darker Scottish heritage.

The marvelous puppetry of Basil Twist and Lute Breuer, accompanied by a whole ensemble of marvelous players, supported this slightly fractured- fairytale-feeling about the whole event.

It is notable that, when Wendy reports that she and her brothers want to return home, Peter considerably chastises them and, for a few minutes, closes the open windows of their home, barring them from returning while hinting that their parents have not been anxiously awaiting them. In those minutes it becomes apparent that this Peter, unlike the earlier Peter Pan, is not only mischievous, but envious and even revengeful.

When Wendy returns to the Darlings house, the first thing she does is to pick up all the “toys,” the tokens of the children’s imagination—including the toy soldiers, the lost boys, the stuffed Nana—pouring them back into the chest to keep them out of reach of their insidious influences.

A pall overcomes the entire work as we realize that Pan, Tinkerbell, and their opponents are now out there, all alone in space. There is no love, not even, any longer, a sense of adventure! Of course he will return to steal away future generations, but in his eternal, darkened childish vision, he will never find the fulfillment of home and hearth.

I cried. I wish I’d had a child along with me to observe and share his or her experiences of this profound version of Barrie’s enduring myth.

Posted by greenintegerblog at 7:46 AM