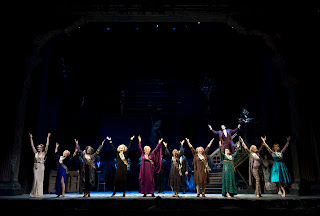 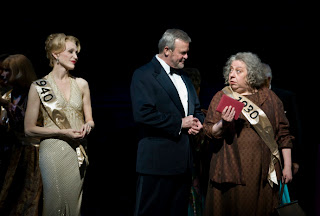 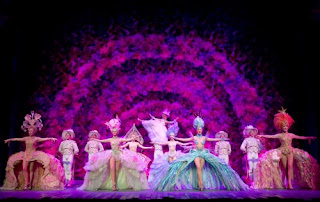 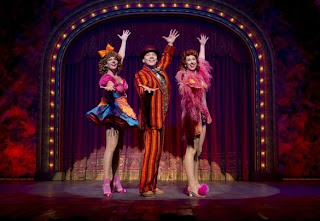 James Goldman (book), Stephen Sondheim (music and lyrics) Follies / Los Angeles, Ahmanson Theatre, the production I saw was on May 26, 2012


Let me begin by unequivocally asserting that Stephen Sondheim is the greatest of living American musical theater composers and lyricists. In dozens of musical comedies and dramas, Sondheim has given us a long string of memorable songs, and notable lyrics in works such as West Side Story and Gypsy before he even got a chance to demonstrate his musical talents.


Let me also admit that after seeing the splendid revival of Sondheim's Follies yesterday at Los Angeles' Ahmanson Theatre, I was sorely tempted to postpone writing about the experience. I was afraid, however, if I didn't immediately take on the task that I'd find myself in the same situation as I am with his Merrily We Roll Along, a production of which I saw in 2010 and have as yet failed to express my thoughts! I know the reasons for my reluctance; they are similar to those that I expressed about Sondheim's Company of 2007 (see My Year 2007). But I find it almost mean-spirited that I can't simply let well enough alone, that I can't just soak myself in all those memorably lyrical and witty songs of desire and pluck—which in Follies amounts almost to a cornucopia of treasures: "Beautiful Girls," "Waiting for the Girls Upstairs," "Broadway Baby," "In Buddy's Eyes," "Who's That Woman?" "I'm Still Here," "Could I Leave You?" "The God-Why-Don't-You-Love-Me Blues," "The Story of Lucy and Jessie," and "Live, Laugh, Love"—go home and report, "What a great show." And yes, this loving and caring revival was a great show, some of its praises which I'll sing shortly.


But—that terrible three letter word—let me just repeat: I have problems with Sondheim's vision. After seeing ten works for which he has written lyrics, music or both, and after having heard recordings of several others, I have to conclude that Sondheim has one of the darkest visions of humankind of any Broadway composer. In work after work, he and his librettists  focus on individuals living in unhappy marriages who cheat, lie, and delude themselves, beings who hate the world, murder, and even consume their fellow beings—drunks, vagrants, and evil-minded conmen and deviously manipulative women. In a Sondheim musical hope and happiness are as rare as a full eclipse played out against the Northern Lights.


Now I certainly do realize that all these subjects are far more interesting as themes help to generate larger issues than do the everyday joys and pleasures of life. For a writer who has titled one book of poetry Dark, has written a fiction about the kidnapping of children and possible pedophilia, and whose plays, although comic, often include arguing couples and dysfunctional families, my observation may sound somewhat insincere. But even in my very darkest of works there is always some sort of reaffirmation or possibility of real hope. Although my companion and I, who have been in a mostly monogamous relationship now for 42 years, may argue daily, neither of us, we concur, has ever thought of leaving one another for more than a few hours at a time. I have nothing against the darkest of visions, but mightn't that dreary scowl be relaxed just once?


I also know, having now read both of Sondheim's volumes of lyrics, with "attendant comments, principles, heresies, grudges, whines and anecdotes," that, although I often disagree with him, the composer is quite brilliant and thoroughly knowledgeable about his art, able to cite the songs of his predecessors, pointing to their successes and failures. Sondheim himself claims Hammerstein as his mentor, and I take him at his word. But as dark as are certain passages in Carousel, Oklahoma! (see My Year 2003 for a discussion of those darker themes), South Pacific, and even The King and I—I will pass on making any comments about his saccharine, sugar-coated Sound of Music—Hammerstein's lyrics and librettos are joyful celebrations, for the most part, of love and life.


Follies, like so many of Sondheim's works, is a kind of haunted castle of lost loves, dreams, aspirations, and hopes, a testament to a world of deluded people who are desperate to find love and meaning in a world that has failed them. Indeed, as Sondheim tells it, his librettist and he first intended this musical to be about a reunion in which, with its central characters plastered with equal parts of nostalgia and alcohol, have motives to kill each other, and he and Goldman originally set out to write a kind of murder mystery set at a party for aged performers. While they eventually dropped that notion—thank God—the sparsely told plot that remains is still about the four central character's torturous marriages, their desires for their dreams of the past, and the gradual stripping away of their delusions ending, at least in the revival version, with the still angry but dependent Phyllis and her husband Ben leaving without much hope of true reconciliation, followed by the newly rejected Sally and her disappointed husband Buddy hoping to just get some rest before they begin the next day of their lives.


Such empty relationships, as we know, certainly do exist. Possibly these unhappy folk can all begin again, and they might even revitalize their relationships—although given the dark songs they have just sung about not getting what they want, losing their minds, and the desire to live life "in arrears," it seems highly unlikely. This same ending faces the characters of numerous Sondheim musicals, most notably in Company and Merrily We Roll Along; while others end in far worse ways: murder, assignation, fiery death, and even cannibalism. One might almost say that in Sondheim's world both characters and audiences are eternally lost in the woods with the knowledge that the wolf is following right behind.


So despite the medley of lovely and witty melodies with which the composer has threaded his works, they are still quite deadly delicacies, laced with heavy doubt and open cynicism.


Having said all that, we must also admit that nearly all of Sondheim's unhappy figures are survivors. They've had their ups (although we rarely see them) as well as their downs, as Sondheim's Carlotta (Elaine Paige) sings:


Good times and bum times,
I've seen them all and, my dear,
I'm still here.


Or as Hattie expresses her pluck:

I'm just a Broadway baby,
Walking off my tired feet,
Pounding forty-second Street
To be in a show.


After hearing Elaine Stritch's rhythmic rendition of this song, with the perfect timing the lines—


At
My tiny flat
There's just my cat,
A bed and a chair.—


for a few seconds I was uneasy with Jayne Houdyshell's more lusty and less-nuanced version; but, in the end, her zest of life nearly brought down the house.


Similarly, the whole chorus gets to tap out their troubles in "Who's That Woman," led by the brass-throated Stella (Terri White).


Sondheim also ameliorates his dark themes somewhat through the clownish behavior of his characters, revealing their own realization of their failures, as in Buddy's (Danny Burstein's) manic "The God-Why-Don't-You-Love-Me Blues" and the haunting "Live, Laugh, Love" song by Ron Raines as Ben Stone, a song of escapism which turns, as in Cabaret, into an echo chamber-like house of horrors.


Sondheim's figures, moreover, often reveal joys that they do not even recognize, or, as he suggests, express deep feelings that they themselves do not recognize as pleasures. This is particularly true in both of Sally Plummer's (Victoria Clark's) powerful ballads, "In Buddy's Eyes" and "Losing My Mind." In the former, she expresses to her friends why she should be happy with her husband without comprehending, so it seems, that she actually might be happy for those very reasons:

And similarly, in "In Losing My Mind," Sondheim himself points to her use of the word "to" instead of "and"  revealing her deepest problems are of her own making:

Clark sang these with a full-bodied voice that certainly did justice to the song, but after hearing Barbara Cook and Bernadette Peters sing those same lines, it is perhaps impossible to accept anything below their perfection.


Finally, Sondheim's comic wit, even if it is dripping with bitterness, occasionally outweighs the despair of his characters. That is particularly true in Phyllis' (Jan Maxwell's) paean to divorce, "Could I Leave You" in which she poses alternatives to her unhappy marriage which she's already embraced:

Could I bury my rage
With a boy half your age
In the grass?
Bet your ass.
But I've done that already—
Or didn't you know, love?

Maxwell sang this with such clear diction that all the song's bitter humor shone luminously, like the crystal which her character daily counts.


For Sondheim, apparently, these stories of survival, self-revelatory slips of the tongue, patter pieces, and comic diatribes are all we have in a world where everything is seen through a glass darkly. Perhaps it's as ridiculous to ask such a dark-thinker to show us the sun, as asking Ingmar Bergman—whose film Sondheim adapted in another recent revival, A Little Night Music—to show us a way out of deep despair. But then, to my way of thinking, that is precisely what Bergman does, whereas Sondheim entertains us grandly, but just as we begin to have fun, puts out the light. And there is, finally, nowhere to go but back home again, with the slightly sour after taste of too much gin in our mouths.