The musical Anything Goes has been rewritten so many times, adding Porter’s songs from other musicals while subtracting several of the original songs, that one might almost describe what I witnessed the other day as a shadow of its first conception, even if, arguably, the layering revisions have burnished it into a better work. Most of the changes, however, have been to the story, and since the silly couplings and un-couplings of the work hardly matter, it is hard to be interested in the “ur-text.” I will be glad to except Timothy Crouse’s and John Weidman’s assurances that they were “purists” “but only to a point.” What is important is that they restored as much of Porter’s score as they could, adding only three wonderful Porter songs “Friendship,” “It’s De-Lovely,” and “Goodbye, Little Dream, Goodbye.”
The story, in fact, pretty much lives up to the musical’s title, the characters almost changing partners willy-nilly. This time round nightclub singer (former evangelist?) Reno loves Billy, Billy loves Hope, Hope pretends to love Lord Evelyn Oakleigh but really loves Billy, Lord Evelyn loves Reno, Elisha Whitney loves Evangeline Harcourt, and Erma loves everybody. Enough said. The book—whatever version you choose—makes soap operas, by comparison, look like grand operas. “Frothy” is the appropriate word.


Yet this chestnut has been immensely popular since its 1934 opening in New York, running 420 performances even during the great depression, and reappearing in successful productions in England and New York in 1935 (261 performances), 1962, 1987 (784 performances), 1989 and 2011 (521 performances). What I saw was a sold-out performance of the touring version of the 2011 production. Why has it succeeded again and again?


The answer, quite obviously, is not just a cast of talented singers and dancers (a requirement of course!) but Cole Porter, who in this and other works turns what might have been tin-pan ditties into pure American poetry. Sure, the music itself is spritely and often borders on a kind regularized jazz. But those words! No one, not even Stephen Sondheim, can write as wittily idiomatic lyrics while pulling his audiences into a kind of licentious world that hints of everything from adultery and drug addiction to sexual orgies and open homosexuality, with his characters simultaneously hoofing up innocent-seeming line dances across the stage. 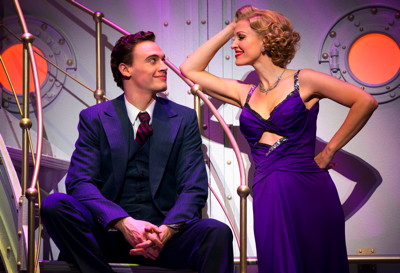 The fun begins with this show’s very first song, “I Get a Kick Out of You,” where Broadway libertine Reno Sweeney (the talented Rachel York) tells Billy about her frigidity concerning everyday life:


I get no kick from champagne.
Mere alcohol doesn’t thrill me at all,
So tell me why should it be true
That I get a kick out of you?

Some get a kick from cocaine.
I’m sure that if I took even one sniff
That would bore me terrific’ly too
Yet I get a kick out of you.


The whole idea of sexual excitement being likened to a “kick,” compared to champagne and cocaine would be unimaginable in Irving Berlin’s near-Puritanized romances. Berlin could be funny, even witty, but couldn’t be funny, witty, and naughty at the same time. When Berlin’s characters said they loved someone they meant it, for all time. For Reno and numerous other characters of Porter’s world love my haunt one, even torture one, but it was seldom seen as permanent and could even be an everyday occurrence, something to traffic in, something someone might what to “buy”—just like champagne and cocaine.


Or consider the wonderful shifts in the notion of “friendship” in the song titled that. It begins as a song of spirited support of one being for another, in this case the musical’s two major “hustlers,” Reno and Moonface Martin (the 13th most wanted criminal):


But gradually as they each try to outdo one another is imagining life-saving necessities, the song becomes a kind of contest which reveals that underneath their “perfect friendship” there is not only an open competiveness but a true hostility:


The lyrics grow even more outlandish as they imagine the worst for one another:


It finally ends with imagining each other being eaten by cannibals, in which the second half answers “invite me.”


These are not the words of supportive human beings, but of criminals who might turn on each other in a minute. Pluming the unconscious depths of American’s fascination with violence—notably present in the entertainments of the 1930s—Porter has created almost a paean to the macabre, a world wherein people land up in jail, put bullets through brains, lose their minds, get sawed in half, and are consumed by cannibals, lines somewhat reminiscent of William Carlos Williams’ observation “the pure products of America / go crazy” and Allen Ginsberg’s opening line in Howl: “I saw the best minds of my generation destroyed by madness, starving hysterical naked….”


Hearing once more the musical’s title song, “Anything Goes,” I realized that, once again, the most important thing about this work is its lyrics—which unfortunately, in the quick-paced rhythms, got somewhat lost in York’s rendition; suddenly it became clear to me that the original Reno, played by Ethel Merman, with her emphatic pronunciations of every word, may have been the perfect Porter interpreter.

Like the peeved reactions of conservative parents through the mid 1960s, Porter presciently reiterates the very same issues of change in his opening refrain:


Times have changed
And we’ve often got a shock,
When they landed on Plymouth Rock.
If today,
Any shock they should try to stem,
‘Stead of landing of Plymouth Rock,
Plymouth Rock would land on them.


The song goes on to explain the topsy-turvy morality of the contemporary world:

The world has gone mad today
And good’s bad today,
And black’s white today,
And day’s night today,
When most guys today
That women prize today
Are just silly gigolos


Porter might almost have added: “Or are gay today.” Indeed, Porter does add himself, indirectly, to that list:


Good authors too who once knew better words,
Now only use four letter words
Writing prose, Anything Goes.


The incessant repetition of the word “today” simply reiterates the inescapable contem-poraneity of it all, the insistence of this song’s presentness without past or future. Porter’s world—at least in this musical—is without guilt or consequence, a godless place where “grandma’s who are eighty” sit in nightclubs getting “matey with gigolos,” where  “mother’s pack and leave poor father” to become “tennis pros,” and “The set that’s smart / Is intruding in nudist parties in studios.”  It is a world we all imagine we live in or, at least, might liked to have lived in, even if the truth is something far different; and for that reason, the elderly audience with whom I sat at the matinee performance, instead of being even slightly taken aback, leaned forward with complete enthusiasm, as the cast tap-tap-tapped.


In such an “anything goes” atmosphere Porter was freed up to even question the normal structure of his songs, to query and even challenge the standard introductory lead-ins and normalized language of Broadway music:


[billy]
I’ll control my desire to curse
While you crucify the verse.


[hope]
This verse I started seems to me
The Tin-Pantithesis of a melody.


[billy]
So spare us all the pain,
Just skip the darn thing and sing the refrain…


Of course, what they sing is “delightful, delicious, de-lovey, delirious” in its de-construction of the English language, letting themselves go in thrilling, drilling (de-de-de-de) of words that suggest being out of control.


Indeed, Porter’s lyrics almost always seem to be slightly over the top, about to spill over into pure ridiculousness as they finally do in “You’re the Top,” where the same couple, Reno and Billy, again in an attempt to outdo one another, compare each other with almost anything that comes to mind, from the Louvre Museum, to a symphony by Strauss, to a Shakespeare sonnet and even Mickey Mouse. Blithely jumping across the bodies of outstanding individuals, expensive drinks, glorious visions of nature, national institutions, celebrity salaries, to end in marvelous industrial creations, moving across the whole society as if it were all of one glorious piece, again not unlike Williams in his Spring and All.


Never has the simple metaphor been used to such an extreme example! At one grand moment the couple compare each other to the great romantic poets only to suddenly drop into the most banal of American consumer products:


hinting at the purist poetry possible!