Douglas Messerli | "The Sacred and the Profane" (on Wagner's Parisfal)

the sacred and the profane
by Douglas Messerli


I should begin by saying that this production of Wagner’s Parsifal, starring Jonas Kaufmann (as Parsifal), René Pape (Gurnemanz), Peter Mattei (Amfortas), Katarina Dalayman (Kundry), and Evgeny Nikitin (Klingsor) seems destined to go down in history as one of the most memorable productions of this opera ever. Even Metropolitan director Peter Gelb couldn’t help boasting, in the second long intermission of the day, that the Act II duet between Kaufmann and Dalayman was absolutely amazing. Much of the production was lit, although quite darkly, dramatically, and the acting was splendiferous by both major characters and chorus. The demon flower maidens of Act II sang so beautifully, even I might have been tempted! And Daniele Gatti’s stunning musical interpretation is nearly unmatchable. 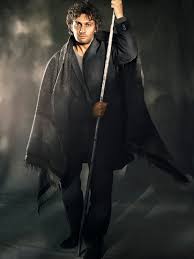 Given the long history of commentary about Wagner’s often mysterious last opera, I should stop there! As is my wont, however, I will make some speculative comments. The most obvious, strongly expressed by an acquaintance we found accidentally sitting next to us, was that the whole opera (she’d see the opera at least three times) was just too “Christian,” filled as it is with the often-secret lore of Grail (the holy chalice Christ drank from at the Last Supper) and Spear (with which Christ was pierced during his death upon the Cross) presented as an almost totemic worship of sacred objects. Wagner’s Authurian Knights, moreover, seem strangely ascetic, denying themselves the company of women. Although there are woman believers standing apart and nearby (however dressed in black and nearly blackened out) in the first Act, who join the men in the last act, the opera seems to indicate that heterosexual activity—at least of the lustful sort—is unpermitted to the young men of Arthur’s court. Klingsor, in attempting to become a member of the court, tries to stem his lustful desires through castration. When still rejected, he embraces evil in the form of sorcery from his castle on the other, pagan side of the mountain. And the court’s current leader, Amfortas, the son of the “Pure” Titurel has been punished for his sexual relationship with the bewitched Kundry (like the luring figure of the modern musical Damn Yankees, Lola, an ugly harridan who is transformed, from time to time, into a beauty) during which he was stabbed by Klingsor with the stolen spear. For his punishment, Amfortas’ wound will not heal, torturing him with such intense pain that he finds it nearly impossible to minister to his community by bringing the Grail to the lips of his fellow followers.


Even more strangely, although the community seems to espouse a gentle pacifist creed in its
isolated mountain habitat, their major activity, it appears, has been one of militancy, as they respond to fellow believers in struggle throughout the world (a  nod to the activities of The Crusades), during which the haggard Kundry serves as a willing messenger in an attempt to atone for her former life. Indeed, when the dimwitted Parsifal stumbles upon their retreat, killing a swan that has risen up over the nearby lake where Amfortas is bathing to comfort his pain, the noble Gurnemanz chastises the “fool” for his militant behavior. This seeming contradiction is just one of many in an opera that anyone might describe as “jumbled.”


It is no wonder, accordingly, that despite its beautiful score, Parsifal has been met with a volley of sometimes outrageous criticisms, including attacks on its militarism and monasticism and Hartmut Zelinsky’s accusation of it as being a “millenarianist fantasy about the redemption of an Aryan Jesus from Judaism,” a feeling, in a milder form, expressed by our friend. 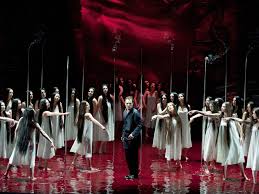 Of course, it is this very mix of elements—the “jumble” of which I speak—that also helps to make this opera an intense allegory that seems to have numerous possibilities in its reading. In his suffering condition, the sinful believer Amfortas is like Christ, is himself a kind of Christ who, as Christ himself did, temporarily loses his way. The innocent and foolish Parsifal is sent off by Gurnemanz for his inability to comprehend the service he has just witnessed; but this fool is also the future savior who will have to undergo his own spiritual journey to come into wisdom, awakened into action by the kiss of Kundry and catapulted into heroism by grabbing the holy spear from the demonic Klingsor. But even then, it will take years of painful wandering and suffering for him to find his way back to the congregation with the new knowledge that he must take over its leadership.


Director François Girard has done several commendable things to help us to understand some of the dualities of Wagner’s story: the fresh stream of mountain water of the Arthurian kingdom is matched in the second act by a river of blood at the base of Klingsor’s kingdom. In both locations much is made of the surrounding liquids. At Klingsor’s castle, the evil leader, Kundry, and his demonwomen must all slosh through the red dye. Back in Arthur’s kingdom, the men are sustained by the fresh water, and Kundry is saved by performing upon Parsifal the ritual—offered to Christ at The Last Supper—of washing his feet.

If Amfortas is Christ, Klingsor, as a kind of bloody-haired Lucifer, suffers equally in his chaste greed. Before Parsifal can come into any awareness he too must be bloodied, just like Amfortas, and feel the strong pull of lustful love, leaving his heart open to pangs similar to those the leader must daily suffer. Parsifal’s strange salvation comes, accordingly, from the lips of Kundry, who, in her lust awakens the young hero only to tell him the truths of his father and mother and their love for him and each other. When Parsifal rejects her embraces, she is compelled to tell him of her own need for salvation by confessing that, having laughed at Christ while he hung upon the cross, she has been damned through several life-times to laugh and jeer at everything around her; she is unable to weep—and, most importantly, is unable to die. Through much of the director’s and designer’s strong images and staging methods, we come to understand Wagner’s deeply embroidered tale far more clearly. Yet, in my opinion, Girard has further distanced us from these tortured knights by turning them into contemporary beings, who, in symbolic gesture of their abstinence, spend the first moments of the opera ridding themselves of ties, coats, shoes, socks, wristwatches and other articles of apparel to be clad only in white shirts and pants. The leader, Amfortas, has even given up his belt. By placing these men in a tight circle (perhaps to remind us that they present “a round table”) as they move, with Busby Berkeley- precision, their hands, heads, torsos in various choreographed positions, they seem more like some strange religious contemporary cult members than worldly knights. I can well understand the director’s determination to rid Wagner’s work of the clanging armor, swords, and helmets of more traditional productions, in order to emphasize these figures’ relationships to us. But by clothing them so indistinguishably and asking them to perform in such ritual precision, Girard even further dissociates them from those in the audience who do not share the intense religious devotions of these men—which includes almost all of us. 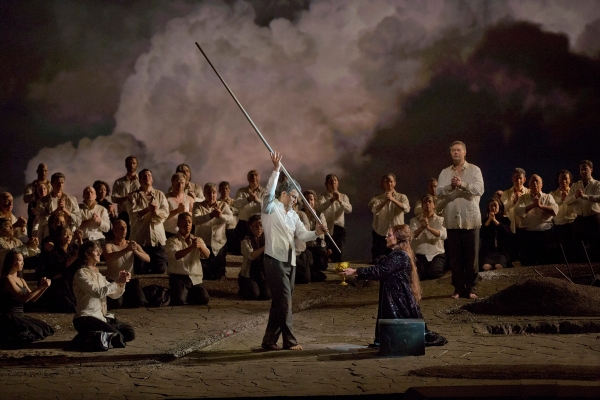 Finally, Wagner himself, in telling his story, has drained out much of the empathy we might feel for his characters. Except for the remarkable duet between Kundry and Parsifal in Act II, most of his story is told in retrospect, in long narrative recitations by Gurnemanz, Kundry, and others. We know that Amfortas suffers, but, except for glimpses, we comprehend it only in retrospect; we realize that Parsifal awakens from his foolishness into wisdom and empathy through his long pilgrimage, but we are not permitted to witness it. It is as if everything that happens of importance in this opera was kept out of sight. Surely, Wagner’s penchant for retelling “story” is present in nearly all of his works, but in Parsifal it is the very substance of the piece, which makes us feel a void when it comes to its dramatic heart. Although clothed in the beautiful sensuality of its music, it is a work that feels cold and steely at its center. At one moment, as Gurnemanz recounts the joys and beauties of Good Friday, the ominous blacks and grays of the set momentarily opened up into a partially blue sky—a moment of intense relief—before being overtaken once more by the black and gray landscape that dominates this great work of art. Even with Parsifal’s healing of Amfortas and his rejoinder of the blood of Christ upon the Spear with that of the Grail, performed almost as a sexual act when the spear is dipped into the circular vessel, we are left still with a quite bleak statement of life. If this is what a spiritual vision demands, I would prefer to remain in the pagan palace to sinfully witness this work of art.