an incautious overdose of life

Peter Quilter (author) (with music once performed by Judy Garland) End of the Rainbow / Los Angeles, Ahmanson Theatre / I performance I attended was a matinee on March 30, 2013

Peter Quilter’s play about the last months of Judy Garland’s like—as the beloved and decaying performer made a final singing engagement at London’s Talk of Town, accompanied by her fifth husband, former band leader and club manager, Mickey Deans (Erik Heger)—is little more than a series of documented and rumored events strung together with witty bon mots, mostly centered on Garland’s alcoholic and drug addicted condition: “It’s all about gravity. My chin and tits are in a race to my knees.” Other than Garland, perhaps the central figure might be said to be her piano player, the Scottish born Anthony (an excellent Michael Cumpsty), who as a gay man begins the play with an self-conscious contempt for the aging star (although she was only 47 at the time of her death), with whom he had previously shared a disastrous performance in Australia (“It was a blood bath”), but whom increasingly comes to feel for the terrified woman, who in Mickey Deans has again chosen the wrong man to love. Anthony ends his time with her by proposing an asexual marriage in an attempt to take her away from the circus of her life, although he seems shocked by her question of whether or not they might share a bed. Garland, this play asserts, was distinctly a sexual being. 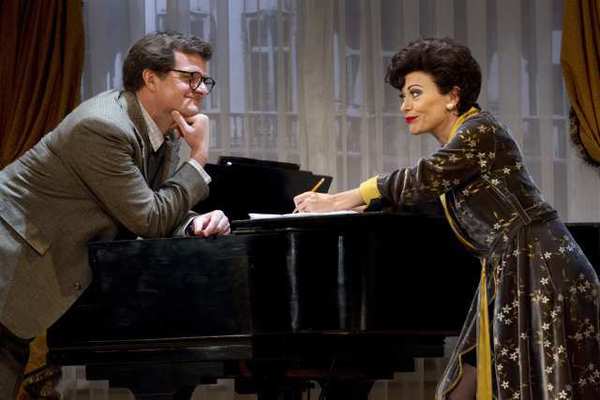 To give him credit, Deans begins the play with a strong attempt to make over her life, managing it the best he can (the couple have hardly any money left) while forbidding her drugs (checking in every possible cranny in which might have hidden them) and denying her alcohol. But gradually it is apparent that in order to literally get her on stage, he must return to the regimen of the studio heads of her early youth: “amphetamines to pep her up and barbiturates to make her sleep.” Behind her fiancée’s back, Garland acquires retinol and escapes, after once performance, into a drunken night on the town. There is obviously no controlling—as Garland herself makes clear—someone sick of being put on display and determined to end her life. A few months after the end of her 1968 engagement, on June 22, 1969, she was found dead in a rented London home, the victim of, as the British doctor understatedly described it, “an incautious self-overdose.” Except for a scene in a BBC studio where Garland answers questions in an outrageous manner and cannot even remember some of the questions she’s asked, most of this sometimes fascinating, but at heart rather repetitive drama takes place in a palatial room (which Garland represents it as being small as a tomb) of the Ritz Hotel.
But then this small documentary-like retelling has something else going for it: Tracie Bennett. As an uncanny like Garland stand-in, Bennett is quite literally an engine of motion, twisting her lithe, small-body into so many positions that, at times, one might almost think that instead of being flesh-and-bones Bennett, like Gumby, is all rubber. Whether jumping upon the room’s grand piano, suffering in pain on its couch, or crawling upon the floor in supplicant pleading for everything that has been kept from her, the actor is in near constant motion. In one scene, after grabbing a bottle pills—and quickly swallowing a couple—intended for Anthony’s pet dog to cure its mange, Bennett performs as a dog, on all fours, comically barking and lifting her leg high in the air in mock-peeing upon her “captors.” With all this almost frenetic action, it is amazing that the actor can stay in character, let alone continually convince us, as she does, that she is Judy Garland. Unlike many drag queens, however, Bennett does not so much try to sound like Garland—although I’d swear at times she’s channeling the diva’s voice—but convincingly moves the way Garland might. Even at the most neurotically pitched number of the evening (“I’m Gonna Love You, Come Rain or Come Shine”) the actor seems less intent upon capturing Garland’s exaggerations, than she is in expressing the tensions of the singer’s inner demons and outer attempts to please her audience. It is, as she puts it, all in the acting rather than in the imitation. I have read that Garland, like Bennett, a small person, would stand behind the curtain before going on looking like a timid rabbit terrified at what she was about to attempt. Then suddenly she would take deep breaths, puffing herself up so that she suddenly looked taller and absolutely powerful as she entered the stage. So too does Bennett accomplish something similar, belting out a chorus just when you would have thought she had, in the previous moment, emotionally spent herself.

As the play, often quite cleverly, transitions from the hotel room to her performances at the Talk of the Town nightclub, where Bennett belts out Garland favorites in a strong voice that is so dead-close to Garland—or at least similar to Garland’s own best imitator, her daughter Liza Minnelli—the audience was absolutely stunned. Through the clever machinations of these scenes, the audience’s spontaneous and often rapturous applause simulated the audience applause of the original performances. Bennett’s Garland, like the singer herself, may not quite be up to Judy Garland’s Carnegie Hall achievement, but they come damned close. While we obviously know Tracie Bennett is not Judy Garland, the actor, as if by magic, truly convinces us that she is a simulacrum—in that word’s primary meaning, “an image”—of the real thing. There is perhaps no better example of what literary critics have long described as readers and audiences “willing suspension of disbelief.”
Yet even if Bennett’s rendition of Garland weren’t so “dead on,” her performance would still be a kind of miracle. If you think of her hotel room movements as a sort of kinetic dance, put alongside her great vocal outcries (Bennett declares that she cannot really sing), one might say that this actor is one of the best musical performers alive. After the show, my companion Howard and I tried to remember all the numerous live-theatre moments in which we had witnessed what he might describe as true greatness: I won’t list all of those, but they included the couple of times we’d seen Barbara Cook live, Faith Prince in the revival of Guys and Dolls, Elaine Stritch in her one-woman show At Liberty, Carol Channing in Hello, Dolly!, Angela Lansbury in Sweeney Todd, John Hurt in Krapp’s Last Tape…several others, all performances you knew you’d never forget until stricken with dementia or Alzheimers. We agreed that we would have to add Tracie Bennett in End of the Rainbow to our somewhat meaningless compilation.

Los Angeles, Easter 2013
Posted by greenintegerblog at 7:29 AM