Alice Goodman (libretto), John Adams (music) The Death of Klinghoffer / the production I saw was at Long Beach, California, the Terrace Theater, performed by Long Beach Opera Company on March 22, 2014


On October 7, 1985, four Palestinian terrorists, who had boarded the Italian cruise ship, Archille Lauro, docked outside Alexandria, Egypt, overtook the ship, turning off the ship’s engines and separated those tourists aboard into different groupings, including Jews and Gentiles.


The goal of these terrorists, in part in reaction to the Israel bombing in October 1985 of the PLO headquarters in Tunis, was to stay aboard the shop until it reached the Israeli port of  Ashdod, and perform a mass suicide killing of Israeli soldiers. A crew member, however, accidentally uncovered the terrorists and the group acted prematurely in taking over the ship.


Using the ship’s captain as their go-between, the terrorist group attempted to receive further instructions from Tunis and elsewhere, and sought reaction from the world community which might help to make them heroes. But despite their proclamations that these men were not murderers, but were idealists, they chose, apparently at random, an elderly, wheelchair bound, Jewish man, Leon Klinghoffer, who had apparently spoken out against them, for murder. The terrorists shot him in the head and forced the ship’s barber to toss him and wheelchair overboard. Terrorists told his wife, Marilyn, that he had been taken to sick-bay, and it was only after the ship docked in Cairo that she was told of her husband’s death.

Although United States President Ronald Reagan sent a US Seal Team and Delta Force to stand by for a possible rescue attempt, most the world refrained from acting, and it was not until the Palestinians threatened further lives that the captain was able to negotiate an agreement that the terrorists would be removed from his vessel, freed in Cairo.


In the aftermath, US planes intercepted the plane carrying the hijackers, delivering them over to the Italian Carabinieri, disagreement between the Americans and the Italians  allowed others such as their leader, Muhammad Zaidan, to continue on their way. Egypt even demanded a US apology for forcing the plane off course. Although all the terrorists served some time, some escaped long imprisonments.


A few years after these events, in 1987, shortly after the success of John Adams’ Nixon in China, director Peter Sellar suggested the Klinghoffer affair as a new subject matter, and Adams and his Nixon librettist, Alice Goodman, began working on the new opera, The Death of Klinghoffer. The opera premiered in 1991 in Brussels with Sellars directing. Reviews were highly mixed, some describing it as a “revolutionary” opera, others chastising it for a cool and cruel meditation on, as Manuela Hoelterhoff suggested, “meaning and myth, life and death.”


As new productions were performed at the Brooklyn Academy of Music and elsewhere criticisms grew, some interpreting a few of the Jewish figures aboard as representing negative stereotypes.


Performances in Germany, and elsewhere followed, but productions in Glyndebourne and Los Angeles were canceled, the latter, in part, I presume through the outrage expressed by our friend Betty Freeman (see My Year 2009), a financial backer of Adams’ Nixon in China.


The production Howard and I saw yesterday at the Long Beach Opera, was based on Opera Theatre of Saint Louis production, directed by James Robinson. This production was the first appearance of the work in southern California. 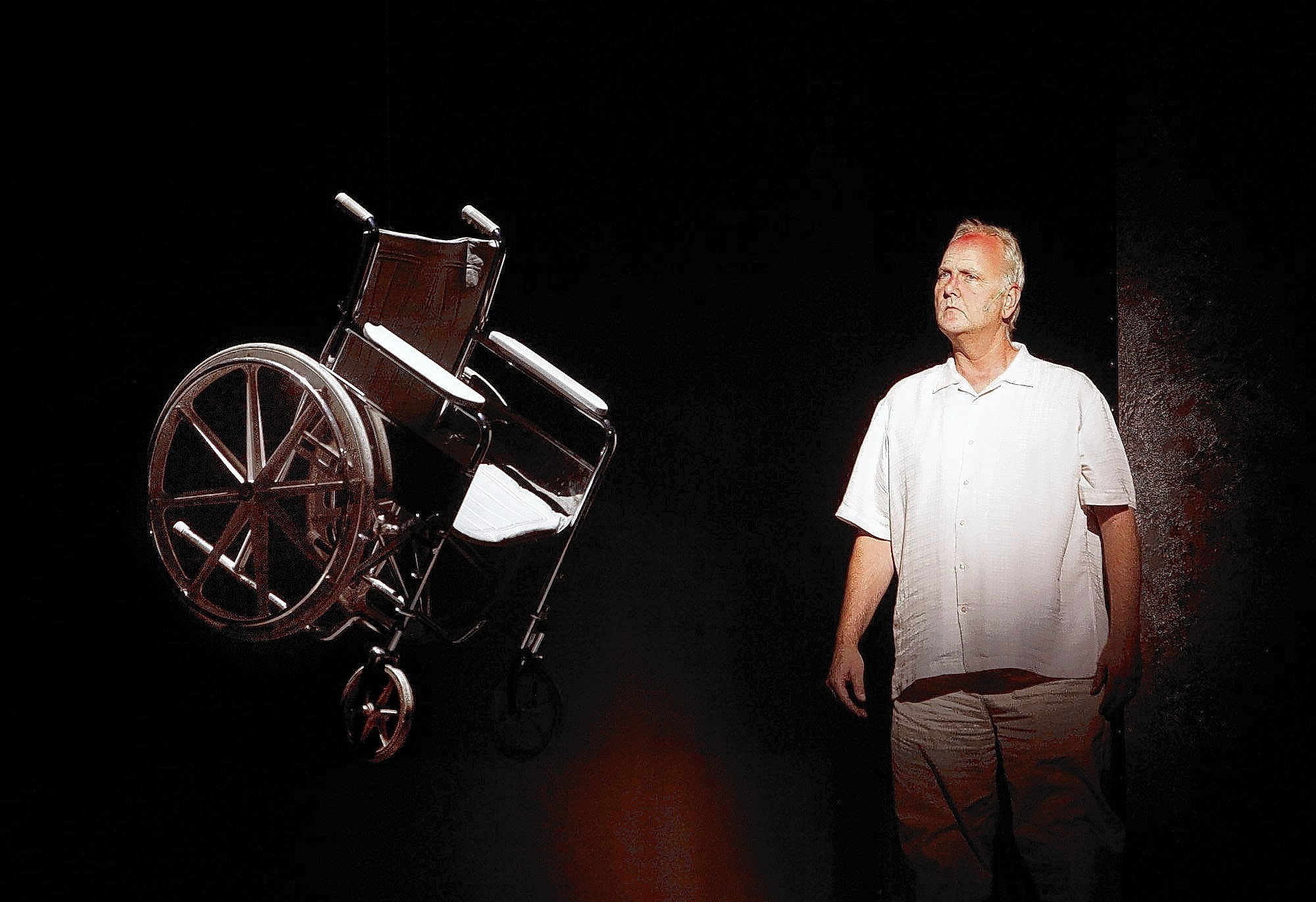 My reaction was also mixed, my negative feelings not based specifically on the equal balance of the representation of both the views of the Palestinians and the Israelis (or the Jews); frankly; as the opera suggests time and again, perhaps only if people can come together and discuss their opposing positions can any true peace be found. Nor was the highly unconventional structure of this opera, which one might describe as more an oratorio than a standard work of operatic narrative, a true problem. While there is no doubt that the series of tableaux Robinson and Adams have created makes the opera, at times, very static, as the choral masses, representing different viewpoints and tensions—The Chorus of the Palestinians, The Chorus of the Jews, The Night Chorus, etc—are presented through group friezes. And, yes, the interactions between characters, except during the highly dramatic interchanges between Leon Klinghoffer (a strong voiced Robin Buck) and the terrorists (Roberto Perlas Gomez, Alex Richardson, Jason Switzer, and Peabody Southwell), are mostly presented through individualized arias that allow for very little real interchange.


Adams’ music, as always, is dark, intense, and swelling, alternating between tonal dissonance and lyrical passages that are almost always alive with awe and suspense. If nothing else the score of The Death of Klinghoffer, like his Nixon in China and the more recent The Gospel According to the Other Mary, represents masterful composition that justifies that his work be performed often. Even if the smaller Long Beach Opera orchestra could not quite recreate what one perceives as the density of Adams’ tonal range, one can only recognize that this is a work of art that deserves close listening.


Some of the work’s arias, moreover, such as that performed by The Chorus of the Night, by Klinghoffer, the terrorist Mamoud, and, at work’s end, by the furiously accusatory Marilyn Klinghoffer (Suzan Hanson), represent extremely powerful operatic statements that transform this work. Presumably The Chorus of the Night, in its dark, clanging chordal structures and in the act of two groups of passengers building up a wall of suitcases between them, hints of the ethnic oppositions even aboard the Achille Lauro, differences presented in more comic moments played out by Danielle Marcelle Bond as an Austrian woman who hides in her stateroom quietly munching on chocolates and fruit while the others on deck are threatened and mocked and the empty-headed British dancing girl she later portrays, who perceives the whole even as a kind of school-girl game.


Klinghoffer’s aria, sung after his death, is an extremely gentle song, reiterating the first “Palestinian” chorus of the opera, which recounts the destruction of everything they (the Jews) had owned after World War II—the welters of the furniture, the destruction of tables and bureaus, or doors and drawers; but unlike the Palestinians, Klinghoffer suggests, although the Jews also had nothing left, they did not attempt revenge or revolution but moved on, creating new lives for themselves. It is a moving operatic statement, thoroughly delineating the reactions of the two cultures.


On the other side, Mamoud describes, in a gruesomely literal aria how his mother was killed by the Israelis and how, discovering his brother’s severed head, he was able to close the tortured man’s eyes. (Discerning, a bit after the fact, what Mamoud had just conveyed, a woman on our loge suddenly cried out in shock).

Marilyn Klinghoffer’s impassioned screed and plea, which ends the opera, is quite simply unforgettable, as out of unspeakable pain and silence, she suddenly rejects the ship captain’s empty condolences, shouting out that his suit smells of the Palestinians, and wailing out her own stupidity for not comprehending the significance the events that have just taken place. By the end of her powerful aria, she cries out for her own death, insisting that she should have died instead of her husband, that she “wanted to die.”*


In short, Adams’ music is not the problem with the work. Even in Nixon in China, at moments I cringed at some of poet Alice Goodman’s language. Her mix of prosaic nonsense and abstract gobbledygook worked rather nicely, however, for the political double-speaking figures such as Nixon, Mrs. Nixon, Henry Kissinger, and Mao. Here; however, with real people facing life and death dilemmas, Goodman’s abstract, new-age like tropes, often seem to have nothing to do with the issues the opera is attempting to engage. People sing of dissolution, of crescent-moons (yes, we recognize its symbolic status in the Arab culture), of sand, and flying frigates—and pigeons, terns, herons, hawks, etc. etc.. all presented as the expression of the ability to be truly be free in a world of borders. This may sound like a kind of poetic lyricism, but Goodman clearly cannot hear the music in what she is attempting to express, often creating impossibly long and illogically impacted sentences that must be quickly elided over in order to fit into the musical phrase.


Some of this mix of abstraction and the ordinary achieves its goal, as when, for instance, at the very moment her husband is being shot, Marilyn Klinghoffer tells a friendly woman about the new advances in hip and knee replacement, while discussing her husband’s paralysis as being something doctors no longer want to deal with, describing them as men and women busy “curing headaches instead of strokes.” But time and again Goodman’s meandering linguistic tunnels take the opera’s characters nowhere, as if they were speaking out of some moon-induced lunacy instead of the world which they exist. And this tends to make Adams’ work far more elliptical and drains it of his music’s inspired emotional poignancies.


Through Goodman’s libretto the real-life death of an elderly Jewish man by murderous terrorists, no matter how holy their cause, becomes a kind of dreamy fable that diffuses dramatic encounters, turning it, just as Hoelterhoff argues, into a meditation of abstract concerns which cloak even the very title with good intentions instead of a solid look into the heart of good and evil.


Interestingly enough, just the weekend before, Howard and I had attended another opera, Billy Budd, which takes place entirely at sea, wherein we also witness an unrighteous murder of someone on board. In both cases, the ships’ captains are particularly culpable, in Vere’s case because of his refusal to mitigate human justice over the law, in the case of the Achille Lauro because the captain refuses to perceive himself as morally responsible for his crew and passengers. Although, like Vere, he is a moral man, even going so far as to insist that the terrorists kill him instead of his passengers, he sees himself more as a hotelier among his crew of barbers, masseurs, shopkeepers, cooks, and servants than as a legal entity. He is a conciliator instead of a leader, a fact which Marilyn Klinghoffer ultimately perceives. Melville clearly was focused, far more specifically, on that very issue: who and what is good, who and what is evil, without providing easy answers. Neither Billy nor Leon Klinghoffer can be saved by the outside world. But the terrible vision of Klinghoffer’s wife reverberates with the Nazi horrors of World War II: how many people must die before the world acts? Must 100 people be killed aboard, she asks? Or millions, history might echo?  How can you talk with a people who cannot even acknowledge that history itself? Although she cries out for death, it is quite apparent that she and numerous others have already died for their beliefs, for their very existence, long before her.


And so too, alas, have many been killed from the opposing sides. The tragedy is that there can be no end to this improbable stand-off of suffering communities. There can be, unfortunately, no easy conciliation between the escalating wars of hate, a tragedy repeated over and over again in the history of our operatic archive.

*One of the most grotesque and painful ironies of this event—although not mentioned in the opera—is that after the events on the Achille Lauro, some accused Marilyn herself as having killed her husband in order to receive his insurance. Later, Muhammad Zaidan confirmed that Klinghoffer had, in fact, been killed by the terrorists.