On July 14, 1973, performing at Knott’s Berry Farm in Southern California, Don Everly, who showed up drunk to the gig, muffed some of the lyrics to the duo’s 1960 hit “Cathy’s Clown,” in response to which his younger brother, Phil, began arguing with him. Don smashed his guitar and left the stage, never to return. Phil, left on stage alone, announced to the audience that “The Everly Brothers died ten years ago! *

Although they performed together, from time to time, over the years following, including at a described “reunion concert” at London’s Royal Albert Hall in 1983, and a year later released a new album, EB 84, the relationship continued to be fractious, for what has been described as political—Don is a Democrat, while his brother was Republican—and life-style choice issues.


Only with Phil’s death, at the age of 74, on January 3rd of the year, did his elder brother again speak out, declaring how much he missed his brother, and wished that Phil could have lived long to know that, in early April, the Library of Congress had chosen their “Cathy’s Clown” for inclusion in the National Recording Registry.


In retrospect it is sad that one of the major US singing duos—highly influential to so many individuals and singing groups such as The Beatles and Simon and Garfunkfel (interestingly enough, two other performing groups who split up, seemingly, too early)—had been pulled apart, basically upending careers that had once been so glorious.


Certainly, there had been signs of tension long before, particularly when it was announced that both brothers were addicted to speed and Don suffered a nervous breakdown while they were touring in the United Kingdom in 1960.


In retrospect, it might have been apparent, almost from the beginning of their career that the brothers might have difficulties in performing together over the decades. The look-alike Everly brothers, with their pretty-country-boy faces and 1950s-styled pompadours, sang in close harmonies which almost stood as a metaphor of what their audiences might idealize as an intense brotherly love that could be interpreted by screaming young admirers, both male and female, as filial or—in their twin-like allure—as bordering on the incestuous.


Unlike the later songs of the Beatles, whom they strongly influenced, and whose lyrics were generally upbeat declarations of love (for example “She Loves You”), the Everly brothers sang mostly of failed relationships resulting in tears and heartbreak for the males left behind. Their first major hit, by songwriters Felice and Boudleaux Bryant, and performed by the Everlys when their were 15 and 17, began with an already failed relationship, declaring the end of love from its very first line: “Bye bye love / Bye bye happiness / Hello loneliness / I think I’m-a gonna cry-y” Their wailing close harmonics, punctuated by Don’s steel guitar that emphatically reiterates that love is over, leaves the two handsome males (narratively speaking, one voice) on stage in tears.


In another of their early hits, “Wake Up Little Susie,” lyrics again written by the Bryants, the boy and girl may not be breaking up, but it is clear that, after having fallen asleep in the movie theater and staying out far past their permitted hour, that their “goose is cooked,” their “reputation shot.” Even by evidently not doing anything wrong, they must now face parents and friends whose judgment of them cannot even be expressed in English but must be replaced by a kind of French phrase “Ooh la la!” The wake up call is also a cry that their relationship is finished.


Even their ballad of love and desire, “All I Do Is Dream” keeps the lover at a distance, as the two (again speaking as a unified I) can only imagine love. “I can make you mine, taste your lips of wine / Anytime night or day.” But in doing so the lover’s life becomes completely empty: “Only trouble is, gee whiz / I’m dreamin my life away.”

Don't want your love any more


Don't want your kisses, that's for sure


I die each time I hear this sound

In song after song, the Everly brothers express not only thwarted love, but the effects of their failure to be loved in terms of tears and death, and, accordingly the two close harmony singers seem nearly always to be lamenting a life apart from love’s fulfillment. As in the song “Bird Dog,” there is always a Johnny around to steal “their” girl. The brothers were compelled to dream of love, begging women to “Let It Be Me,” without actually finding the love they seek. 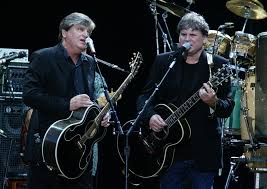 When the Beatles first appeared on the scene in the early 1960s, I couldn’t, at first, quite comprehend their significance, whereas, throughout the late 1950s, as a young homosexual Iowan (the Everly family had lived for several years in Shenandoah, Iowa before the brothers moved to Nashville), I immediately, if only subliminally, recognized their allure—just as I did, a few years later, that of the Simon and Garfunkel duo, who every gay man must have, at one time or another, imagined as a sexual couple. In comparison the Beatles seemed too witty, chipper, and self-satisfied to ever “cry or die.” They nearly always got the girl.


For two heterosexual guys who, evidently, lived later in loving relationships with women, that produced several offspring, the tensions of playing the somewhat ambiguous roles which their music demanded of them must have been extremely complex. Add to that fact that they had been forced to sing together for years earlier by their performing father and mother, Ike and Margaret, and you can begin to comprehend their sibling rivalries. Don, so it has been reported, was jealous of his brother’s “lilting tenor voice,” and both felt a bit left behind with the British invasion of The Beatles, The Hollies, and other groups—made to feel a bit “old fashioned” long before their influence had waned. One can ultimately understand their inabilities to share the stage with their “other”; their on-stage personas didn’t match the offstage realities of their lives. They may have loved one another, as Don argues, every day of their lives; but that love, as expressed so beautifully in their music, was not the same as the metaphor their performances demanded of them. In real life, they were simply brothers, people with very different personalities and private lives.

*Some sources claim the opposite, that Phil destroyed his guitar, storming off stage, leaving Don on stage to declare the duo’s death. I have based my comments on Ray Connelly’s April 5, 2014 piece in London’s Daily Mail.