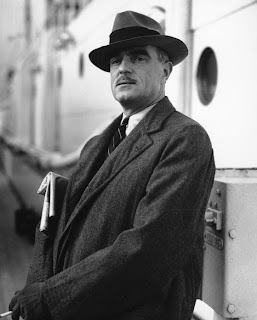 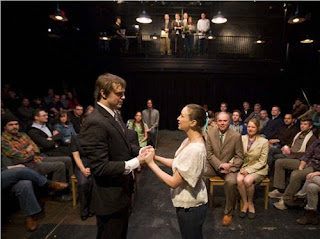 Thornton Wilder Our Town / New premiere February 4, 1938 at Henry Miller's Theatre / the production I saw was at the Barrow Street Theatre, New York, May 10, 2009

Few American plays can lay claim to being almost a dramatic "national anthem" other than Thornton Wilder's Our Town. Susan Bee recently suggested that everyone of a certain age who performed in high school theater was, at one time or another, in Our Town. I performed as a minor character in just such a production.
Over the years, however, it has seemed to me that this archetypal drama without sets or costumes has gotten a little stale. Howard and I attended a production at Arena Stage in Washington, D.C. around 1973, when they also performed that work, among others, in the Soviet Union.
I remember that production primarily for the acting by Robert Prosky as the stage manager. Prosky performed it in a manner that was so "folksy," I could hardly bare the sentimentality of the piece. A 2003 television production starring Paul Newman and directed by James Naughton seemed even more lifeless.
I also have the feeling that over the years that in some productions more and more props have crept onto the stage despite Wilder's insistence that the play use only three props at most. But perhaps this is just an illusion brought about by the busy verisimilitude of the productions I've seen.
The 2009 production at the Barrow Street Theater in New York, accordingly, was a welcome change. Directed by David Cromer, this Our Town was a dusted-off rendition, where part of the audience, an important feature of the script, appeared on stage (me among them), several of whom were asked to read the questions in response to the academically inclined lecture of Professor Willard, who describes the geological history of Grovers Corners and surrounding territory.
The stage manager of this version, Cromer himself, lost the New England accent usually lathered on in heavy doses, and spoke in a more appealing everyday quality, sometimes injecting energy through his hurried asides into a work that has a tendency in its slow spin of story-telling to fall into lethargy. With only two tables, and four chairs Cromer created a believable pair of houses in which live the Gibbs and the Webbs, whose children grow up, marry, and die in a few short hours. The abandonment of the New Hampshireisms was a particular advantage, I felt, since the play is so universally "American"—however one defines that—that this work has always seemed to be more at home in the author's home state of Wisconsin. Wherever Grovers Corners is, it exists more in the mind that in reality, and to place it in any particular locale seems to me beside the point.
So casual were the actors, dressed in mostly contemporary clothing, that even the heart-rending wedding scene and the nearly impossible-to-perform cemetery conversation among the dead lost a great deal of its sentimentality.
Interestingly, after paring down the characters lives and actions to almost abstract imitations of life, Cromer pulled out the naturalistic stops, so to speak, for the famous final scene when Emily Webb (Jeniffer Grace in this production) asks to go back "home" for one day in her life. Suddenly a curtain behind the stage was opened to reveal an entire kitchen, with a table set with plates, silverware, napkins, a working water pump and a stove where Emily's mother, costumed in turn-of-the-century dress, fries up bacon and pancakes. The startling comparison of the abstractness of the rest of the production with this highly realist scene brought home, with amazing results, one of Wilder's major themes, that we are too busy living life to really see it. Perhaps only the dead can truly smell the coffee, but on the Mother's Day Sunday I visited this play, the entire audience shared in the experience, as tears fell from nearly everyone's eyes. In a strange way, it was if Wilder had restated, within a narrow realist context, Ionesco's absurdly comic observations about living and death.