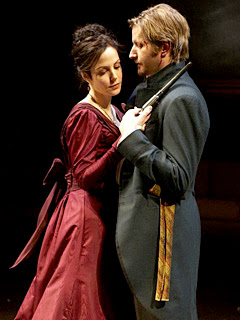 As New York Times critic Charles Isherwood suggested in his piece (January 18, 2009) on the upcoming production of Henrik Ibsen's Hedda Gabler, Hedda is an "antiheroine" who inevitably draws actresses to her. She is, to put it mildly, one of the nastiest people of 1890s Norway, and one of the "meanest" (as Isherwood describes her) women in theater history.
To start, she has just married the innocent scholar Jørgen Tesman without any love for the man (she cannot even abide his scholarly interests in domestic crafts of the Middle Ages) but for the reason, as she puts it, "I had danced myself out... My time was up"—in short, within the confining society of the time, as a woman in her late 20s she is in danger of being described as an old maid.
Equally without purpose, she has demanded they move into a large city house, replete with expensive furniture, this despite the fact that George has not yet been offered the teaching position he hopes will help with the expenses. Rather than accommodating George and his beloved aunt, Hedda demeans both by pretending to believe the aunt's new hat—purchased especially to please Hedda—belongs to the servant, who has tossed it upon the chair. The flowers sent to honor her return from her honeymoon are trashed.
Later it becomes clear that Hedda has had close relationships both with George's intellectual foe, the Romantic and dissipated Eilert Løvborg, and with the family's friend, Judge Brack, who has helped attain and fund their new house and belongings.
These relationships, however, are not exactly sexual, for Hedda is what we might describe today as a sexual tease, drawing the men toward her only so that she might have control over them. The minute they cross the line, she pulls out her father's (the General's) pistols and shoots. Indeed Hedda might be said to represent the military way of life. Disinterested in cultural history, she uses the past only as a method of strategy, of determining how to control the men under her "command," demanding of Løvberg, as she hands him one of her pistols, death. When Judge Brack, a far more clever opponent, wily finds a way to put her under his control, she reacts with the only response she knows, committing suicide with the remaining gun.
Hedda is, quite clearly, an intense woman burning up with desire, but so afraid of losing her self- control, so determined to rule each situation, that she must destroy everything around her, including the brilliant manuscript Løvberg has just written and lost on his way home. Like the uncontrollable behavior fuelling her actions, she burns his book in the stove, destroying his metaphorical "child," the only force of life and possibility in the play, and in that act, seals her own doom.
Yet, as Isherwood and others have pointed out, this "queen of mean" must reveal some other qualities just to make her believable. We need to comprehend her beauty, her wit, her positive qualities—whatever they are—just enough to understand why the intelligent Løvberg, the slimy Brack, and the doddering academic husband all find her so necessary in their lives. For, in the end, all she has touched, all she has thought she controlled, turns to naught. Løvberg does, indeed, die, but as the result of an accidental shooting in the groin, not a bullet through the head. Brack has no real need of Hedda; for him she is simply another tool for manipulation. And "poor" Jørgen ends up happily with Mrs. Elvsted, an attractive woman who has just left her husband to help Løvberg with his writing, who now will surely find a soul mate in Tesman. Accordingly, if Hedda is only presented as a mean, hateful being, the play ends in black hole as the energies of the piece (represented by Hedda and Løvberg) collapse, leaving us with only good, empty-headed bourgeois folk. Despite her aberrations, the audience needs to have been in love with Hedda!
Unfortunately, the preview of the production I saw in New York on January 17, 2009, offered no solution to the problem. Although Mary-Louise Parker may have been perfect as a sort of sexual gamin in previous plays such as Reckless, Prelude to a Kiss, and How I Learned to Drive, here she has little sexual warmth, mouthing Hedda's evil wit with a not so subtle wink and nod, slowing down the action so that, by the end of the play we feel superior to all the characters in the work. Her intense queries directed at Mrs. Elvsted, for example, seem more like an interrogation than the somewhat desperate questions of a jealous woman. Similarly, Michael Serveris's Jørgen Tesman is played as such a fool that even if Hedda feels his offer of marriage was her last chance, we, like Løvberg, cannot comprehend her decision. Rather than creating an innocent alternative to Hedda, Ana Reeder's Thea Elvsted seems an even greater simpleton than Jørgen, unable to understand the comic manipulations of Hedda concerning their shared years in school.
Christopher Shinn's adaptation of this play, as far as I could tell upon rereading the Fjelde translation of the play a day later, eliminates any possibility that Hedda may have any good qualities, such as her determination to remain faithful to her husband. Anything that might have softened Hedda, to help us to see her as the great lady we are told she is, seems to have been obliterated. In the end, when Judge Brack reacts to Hedda's suicide, "People don't do such things!" we might almost respond: "But then Hedda isn't really a person, is she?"