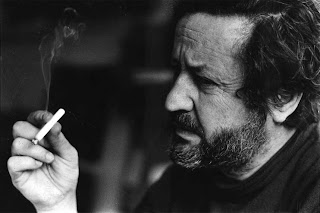 As I mention in My Year 2007, in the 1990s I published two plays by the noted Norwegian writer Jens Bjørneboe, The Bird Lovers in 1994, and four years later, Semmelweis. Both works are "didactic" in the sense that the writer is determined to convey to his audience large, banner-like themes. In the early 1960s Bjørneboe stayed for a time with the Berliner Ensemble, working through a kind of apprenticeship with many of the major figures of Brechtian theater, and these plays, both of which contain songs that point up dramatic events, show the influences of the German playwright.
Yet as Joe Martin points out in his introduction to Semmelweis, Bjørneboe's theatrical "alienation," similar as his views are to Brecht's, takes his plays in very different directions from the master. Indeed, both of these plays work nicely with Bjørneboe's more complex late trilogy, The History of Bestiality (1966-1973), of which I wrote (through the example of Kruttårnet [Powderhouse]) in my 2007 essay. In these fictions, as well as in the two plays, Bjørneboe is primarily interested in cataloging evil rather than assigning it or even creating solutions which might prevent it.
In The Bird Lovers, a small group of working Italians who served together in the war and were imprisoned by the Germans, gather regularly at a bar to talk and to eat; they are particularly fond of serving up the small game birds in the region. Enter Mrs. Director Stahlmann, a bird lover who is determined to stop the practice of killing birds in the village and, with the support of the National Society for Animal's Rights, plans to bring new tourists to the region by establishing it as a bird sanctuary. The various verbal volleys between the two groups are predictable and mostly comic, with the locals clearly getting the better of the situation.
To this town also comes Huldreich von und zu Greifenklau—a German judge determined to enjoy the local songbirds for their music—and his servile friend, Johannes Schulze, both of who are immediately recognized by the cafe regulars as men who tortured them and killed their friend in prison. Despite the protests of one of the men's wife, the group is bent on kidnapping the two from the local hotel and putting them on trial for murder.
The mock trial reveals the horrible evils of Grifenklau's past, and the group is ready to hang both him and Schulze until the defendant's assigned lawyer, Father Piccolino points out that the evil these men have perpetuated came as much from their superiors. Like the Nazis after World War II, Piccolino argues (despite his belief they are guilty) that they were merely doing their duty. But Piccolino also argues from another point of view, that of the executioners, pointing out to them that if they proceed with the hanging, they too will be guilty, just as Americans who strung Blacks up in trees, as Turks who drove the Armenians into the desert, as the English who shot and hung the Irish, and the French who electrocuted the Algerians. The theme, highly reminiscent of Bjørneboe's listings and descriptions of punishment in Powderhouse, turns the tables, so to speak. Gradually, one by one, the men see the folly of their acts, and "sell out" by accepting the Germans' promises to financially help them when the city becomes a tourist spot.

In short, as translator Frederick Wasser points out, Bjørneboe does not attempt to answer what to do about evil, but merely wants to recognize it in all of us. It is as if Bjørneboe, despite his hatred for all the tortures of individuals by human beings and institutions, does not comprehend a way to end it—accept through comedy and, of course, death. We are a race unforgivably cursed by our past.
So too is the great Hungarian doctor Ignaz Semmelweis mocked by all those around him for his theories about handwashing before operations. The doctors and students he calls "murderers" are just that, men who because they refuse to see the truth do not take the proper precautions and kill every year hundreds of their patients—particularly women during childbirh. One of comic frustrations of this drama is the outlandish statements of the scientific belief of the day, that child-bed fever is not contagious but is brought on by the sexual enjoyment of women of the lower class. These and other such notions would be merely comical except for the fact that they cover up any truth, and they use these beliefs, moreover, as tools to ruin Semmelweis.
But as in The Bird Lovers, Bjørneboe's "heroes," Semmelweis and Kolletschka, are also fools. Semmelweis is a kind of mad innocent, a man so devoted to his beliefs that he has no notion of how to properly achieve it or to make any compromise that might cause his theories to be practiced. Despite his seeming purity of purpose, Semmelweis drowns his sorrows in sentimentality, wine, and whores, ultimately dying of a kind of slow suicide. Kolletschka dies, ironically, of the very disease which he once proclaimed was not contagious.

Bjørneboe's play centers less on individuals that on the institutions, the universities, the hospitals and other organizations which, while supposedly searching for truth, fight any possibility of discovering it. The reality of these organizations is that the teachers, students, and doctors were to admit to being wrong, they would be crushed by the very thing they believe they are promoting. Accordingly, truth is the last thing that such institutions can permit. The playwright makes this even more ironic, but encasing his play in a student protest which ends with a male student insisting that such protests have been the "forerunners of fundamental change" while the students within the play are often the most resistant to Semmelweis' dictums.
Once again Bjørneboe makes it clear that evil is so prevalent that everyone can share in its curse. The students of 1968 may have been admirable for their refusal "to allow [themselves] to be used for oppression and genocide," but we know that the students of just a few years later would become the powers behind new atrocities.