While in New York City in January 2008, I attended the revival of Harold Pinter’s The Homecoming at the Cort Theatre.

Although I’d read the play upon its first publication in 1967, I’d never previously seen a production of the play, and I’d forgotten much of its dialogue. The plot is not what this play is about, but I’ll briefly recount it for those readers unfamiliar with Pinter’s great work. Teddy, a professor of philosophy now living with his wife, Ruth (Eve Best in the production I saw) in the US, returns to his North London childhood home in the middle of the night. He suggests they retire to his old room—checking first to be sure it’s still “there” or, at least, empty—but Ruth prefers a short walk, the first sign there may be something amiss between the two, particularly when she promises Teddy, she’ll return. He goes to bed, and as she reenters the house she encounters the first of Teddy’s brothers, Lenny, a small time pimp, who relates several violent stories about his relationship with women before he challenges his sister-in-law by insisting he remove her glass of water. Ruth refuses to give it up, suggesting he take a sip, and even offering for him to sit on her lap before she climbs the stairs to bed. 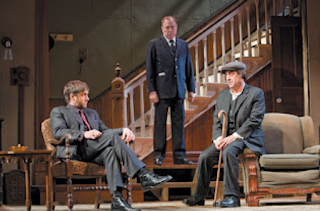 Upon discovering the next morning that his son has returned home, Teddy’s father Max (Ian McShane), is outraged at not being told, and when Ruth is presented to him, vociferously insists that she is a tart until they can convince him that they are, indeed, married, blessed with two children. By the second act, Ruth has been introduced to Max’s third son, Joey, an inarticulate young man who desires to become a boxer, and Max’s brother, Sam, who works as a chauffeur. Except for Sam, this “family,” it soon becomes apparent, is more like a jeering and leering cannibal clan than a gathering of a loving father and sons. It also becomes apparent that, although she appears rather refined and well-dressed, Ruth fits quite easily into this brutal situation: she is, as she admits, originally from the neighborhood, and soon after we discover that she was, in fact, a prostitute in her previous life. Before long she is languidly embracing Lenny and sexually fondling Joey on the living room floor. By play’s end she has bedded down with Joey in the upstairs bedroom, and Lenny has offered her a flat where she can ply her trade a few hours every day in order to help pay for her boarding in their house. Sam collapses in a heart attack, revealing that the boy’s mother, Jessie, had sex in his cab with Max’s former friend, MacGregor. The nearly speechless Teddy leaves, to return to his two children, alone.

This rather bizarre series of events was obviously quite shocking to theater goers in 1965, and many equally bizarre critical theories of the play’s meanings arose, including a suggestion by some critics that Ruth and Teddy were not truly married—an idea that is given no credence by the play itself. In fact the “events” of this play seem, as strange as they are, almost inevitable given the grungy conditions of both house and inhabitants and the obviously stifling life and husband Ruth leaves behind. While Teddy seems oddly unaware of any unusual behavior in his family, and has little to say about anything—he is proud of his “intellectual equilibrium,” his abililty to operate on things, not in things—his family members are absolutely quivering with love, hate, sexuality and violence, which they brilliantly express to one another not only in their actions but through their lively language. Pinter’s play, accordingly, is not truly about what happens, but about how it happens and what is said. At the center of this linguistic battleground is Lenny, brilliantly played by Raúl Esparza. If in last year’s Company he was given little to do as an actor, in this play he is at the center of the verbal fireworks, pushing and probing through language for each character’s weaknesses. While his brother teaches philosophy, but has a focus so narrow that almost any issue is outside his “province,” Lenny is ready to consider the major questions of Western thought such as “a certain logical incoherence in the central affirmations of Christian theism,” and the “business of being and not-being.”

“…I’ve got a couple of friends of mine, we often sit around the Ritz Bar having a few liqueurs, and they’re always saying things like that, you know, things like: Take a table, take it. All right I say, take it, take a table, but once you’ve taken it, what you going to do with it? Once you’ve got hold of it, where are you going to take it?”

When asked what a table is, Teddy can only respond, “A table.”

Max may not be brilliant, but he is hilariously clever in his never-ending abuse of those about him. To his brother, Sam, he lectures:

“Look what I’m lumbered with. One cast-iron bunch of crap after another. One flow of stinking pus after another. Pause. Our father? I remember him. Don’t worry. You kid yourself. He used to come over to me and look down at me. My old man did. He’d bend right over me, then he’d pick me up. I was only that big. Then he’d dandle me. Give me the bottle. Wipe me clean. Give me a smile. Pat me on the bum. Pass me around, pass me from hand to hand. Toss me up in the air. Catch me coming down. I remember my father.” 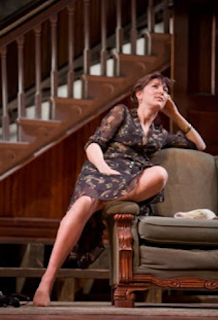 Even the near mentally-retarded Joey is a philosopher of sorts; when Lenny discovers that after two hours in bed with Ruth, Joey has not gotten any “gravy,” he calls her a “tease,” to which Joey responds that a man can be “satisfied” without “going any hog,” recognizing the fact that sex is far more than ejaculation.

In short, these men may be self-destructive criminal-types, Max, a violent braggart whom Pinter hints may even have sexually abused his children in their nightly baths, Lenny, a misogynistic voyeur, and Joey, a brutal oaf, but they nonetheless are stimulatingly alive, and in the end, Ruth inevitably prefers their company to her frigid scholar.

There is even a suggestion that Teddy has brought Ruth into his home and now her new home as a gift to his family, as a sort of return token of his esteem. His suggestion that she is very popular with the other faculty members hints that Ruth may have been sexually involved with his fellow faculty, endangering Teddy’s position. Certainly that would explain his aloofness throughout much of the play, and his attempt to quickly escape his family’s embrace.

By play’s end, however, Ruth has found much more than a home, she has rediscovered a career and is in control of this miserable family. As Max screams out for her attention, Joey fondles her knee, and Lenny stands simply watching, we recognize that she will not have too many familiar “duties” when it comes to her new household, that she can easily fulfill their desires for wife, mother, lover without ever having to give much of herself. Like Jessie, Max’s former wife, she will easily be able to have her own way.