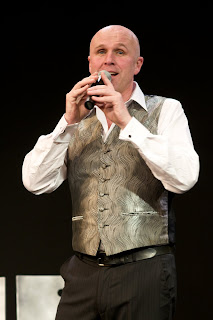 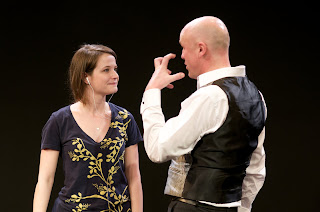 THE MIRACLE OF ART
by Douglas Messerli

Tim Crouch An Oak Tree / premiered at the Edinburgh Festival, 2005; the performance I saw was at The Odyssey Theatre Ensemble, Los Angeles, on February 13, 2010

First performed in the Edinburgh Festival in 2005, Tim Crouch's play An Oak Tree, which I saw in February of this year, is ostensibly a work about three individuals trying to come to terms with a great tragedy, in this case the accidental death of a young girl. Crouch, playing a performing hypnotist, has three months earlier hit and killed a twelve-year old pianist, Claire. One day, at a performance of his show—the one we are attending a year later, we are told, in a upstairs pub near Oxford Street—a man, among invisible others from the audience, volunteers to be hypnotized: Andy, the man whose daughter has been killed, is now near madness, with cracked lips, bloodshot eyes, and other evidence of bodily decay. Played by a guest actor who has never before met Crouch and who has not seen or read the play, this new Andy must act out the encounter with Crouch/the hypnotist by following a combination of directions and lines whispered into a headphone, reading sections of script, and following verbal instructions by the author. One scene involves improvisatory movements.
Despite his daughter's death, Andy has continued to believe Claire is alive, inhabiting the very air of his and his wife's home and ultimately being transformed into a giant oak tree. His wife, on the other hand, is inconsolable about her loss, and frightened for her husband's sanity. Both husband and wife have considered suicide. The hypnotist's life, he tells us, has changed radically, and he is performing badly, just acting out his previously scheduled performances before he crashes into despair.
Each has found a way to survive, but Andy's is the most creative, since he has consistently been able to see something where no one else can, is able to create a new reality out of what others see as inanimate things.
Crouch has based the idea of his play on a noted conceptual art work, shown at the Tate Modern museum by Michael Craig-Martin in 1973. In Craig-Martin's work a three-quarter full glass of water sits on a high shelf, beside it a text which begins:

Q. To begin with, could you describe this work?
A. Yes, of course. What I've done is change a glass of water into
a full-grown oak tree without altering the accidents of the glass of water.
Q. The accidents?
A. Yes. The colour, feel, weight, size...
Q. Do you mean the glass of water is a symbol of an oak tree?
A. No. It's not a symbol. I've changed the physical substance of the glass
of water into that of an oak tree.
Q. It looks like a glass of water.
A. Of course it does. I didn't change its appearance. But it's not a glass of water, it's an oak tree.
Q. Can you prove what you've claimed to have done?
A. Well, yes and no. I claim to have maintained the physical form of the glass
of water and, as you see, I have. However, as one normally looks for
evidence of physical change in terms of altered form, no such proof exists.
Q. Haven't you simply called this glass of water an oak tree?
A. Absolutely not. It is not a glass of water anymore. I have changed its
actual substance. It would no longer be accurate to call it a glass of
water. One could call it anything one wished but that would not alter
the fact that it is an oak tree.
Q. Isn't this just a case of the emperor's new clothes?
A. No. With the emperor's new clothes people claimed to see something
that wasn't there because they felt they should. I would be very surprised if anyone told me they saw an oak tree.
Q. Was it difficult to effect the change?
A. No effort at all. But it took me years of work before I realised I could do it.

Obviously, Craig-Martin was demonstrating the transformative ability of art, pointing to our imaginative pact that what appears to be one thing is readily perceived as something else (a few lines on paper become the face of a woman or paint on a canvas is seen as a mountain, a man, a beast).
Similarly, Crouch takes his dramatic situation and in the space between his character's troubled lives and desire for a salvable peace, he demonstrates how theater and art function.
Although the play is new territory for the volunteer-actor, Crouch, in full view of the audience, directs the actor how to perform and provides him or her (the role is performed by a different male of female actor every time) with the dialogue written in the script. The performance, as in all theater, is always different (that is, Crouch argues, why we go to see plays instead of simply reading them), while the words and character's actions stay basically the same—although he admits, "Every time this play is performed it screws up. Moments are lost, lines are stumbled over, rhythms are broken, confusions abound."
Into this contrivance, Crouch has placed these two desperate figures (and some dialogue from Andy's homebound wife) to help us to comprehend the transformative possibilities of art. At times hypnotizing his subject (convincing Andy that he can play the piano and that, later, he stands on the stage stark-naked, defecates before the audience, and accidentally hits an innocent bystander while driving) he temporarily controls his own reality. Andy, meanwhile, has done the same thing by transubstantiating his beloved Claire into a living oak.
By alternating this "dramatic" reality with the everyday talk of actor to actor, speaking as the creator of this play with a neophyte, he further forces the audience to perceive the various levels of theatrical artistry. The writer is playing a actor playing a writer, a young woman (on the occasion I attended the role of Andy was played actress Alex Kingston, and over the years has been played by hundreds of actors including Bob Balaban, Mike Myers, Laurie Anderson, and Frances McDormand) is playing an older despairing man. Despite these purposely alienating, Brechtian contrivances (at one point Crouch even asks his actor: "You didn't think it was too contrived?"), and despite Crouch's inability, in my view, to write to the poetic level he attempts to achieve, the audience was still able to feel for the individuals for whom we had suspended, time and again, our disbeliefs, thus saving the sanity of the characters. At play's end Claire both is not and is still an oak tree. Andy can, after all, play the piano, like his gifted daughter, even if he's never played a note. That is the miracle of art.