Douglas Messerli "The Dogs Howl" (on Anton Chekov's The Seagull) 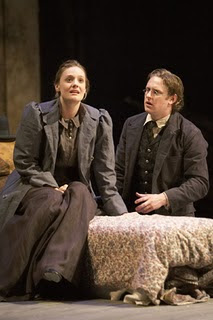 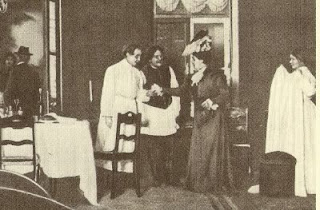 No sooner has the snuff-sniffing, vodka-tippling Masha melodramtically announced to the school teacher Medvedenko that she wears black because she is in mourning for her life than Sorin, the owner the country estate, asks her to tell her father to unchain the dog who has been barking all night. His guests, particularly his sister Irina Nikolayevna Arkadina, have been unable to sleep.
Far more than the seagull (which I might remind the reader is itself a rather noisy, barking bird—at least most mornings in my Los Angeles neighborhood), Anton Chekov’s metaphor of the howling dog dominates his four-act “comedy.” If the young Nina is ruthlessly transformed by the end of the play into a dead seagull, all of Chekov’s characters are clearly howling dogs, beasts who endlessly cry out for love and attention

Arkadina’s son, Konstantin, having grown up in a world of important figures of the day, feels he has no identity and has made little contribution to the world. He desperately seeks a way to please his mother by presenting his own play. The audience—on stage and off—are never permitted to witness the whole of his work, but it clearly is the writing of an amateur, an abstract howl of sorrow set in a bleak holocaust of the future where “men, lions, eagles and partridges, antlered deer, geese, spiders, silent fish which live in the water, starfish and organisms invisible to the eye—in short, all life…” has vanished, leaving only the red eye of the sulphurous smelling demon in its place.

The young actress of this piece, Konstantin’s beloved Nina, has not yet learned to howl—although she warns Konstantin not to stand, as he threatens to, by her window garden for fear her dog, Trésor, will bark. Her unfortunate situation is well known, however, by the surrounding adults: her mother has left her large estate to Nina’s father, who having remarried, keeps a close watch over his now disinherited daughter. By play’s end, moreover, she too will discover how to growl, howling out her sad tale to Konstantin before she leaves him forever for a career on the stage. Might she, in the future, become an Arkadina, a Duse, a Bernhardt?

Interrupting her son’s literary contribution, Arkadina is perhaps the most selfish of Chekhov’s beasts, a penurious, self-enchanted actress who insists on being the center of everyone’s attentions while serving them up tales of her own success. Trigorin, with whom she is having an affair, is a successful novelist, but as he describes himself later to Nina, he uses all others in his never-ending cycle of transforming life into words. Any stray image, any passing expression he hears becomes grist for the mill of his creative endeavor. It is he who compares Nina to the dead seagull Konstantin has lain at her feet, and after using the metaphor for his writing and actually enacting the transformation in real life—destroying the innocent girl in a self-serving sexual relationship, he utterly forgets the original event.

Even the minor characters of The Seagull reveal their bestial behaviors. Masha is desperately infatuated with Konstantin, while her mother, Polina, is still in love with Dorn, the local doctor, who evidently was the center of many women’s attentions early in his life. Dorn lives in his memories without attending to the present. Medvedneko is a nebbish without any sense of self-worth, Masha’s father Shamrayev, an utter bore.

In short, these monstrous beasts, locked away for the summer in a country estate, sniff out one another as they bray to the skies for relief. Only Sorin can comfortably sleep, a condition into which he falls continuously throughout the play, while awaking each time as if into a nightmare.
Since the characters of Chehkov’s play, accordingly, each represent a version of the same thing, it is crucial that the company work not just as a closely-knit ensemble, but that their acting talents are relatively equal. Medvedneko must be as fearfully intimidated as Arkadina is fearlessly intimidating. Trevor Nunn’s Royal Shakespeare Company’s production, which I witnessed at UCLA on October 28, 2007, was a failure on several levels. Misinterpreting the confrontation throughout the play of peasant life against the largely imagined world of the artistes, Nunn drudged up British class distinctions, insisting Masha, Medvedneko, and others speak in a kind pigeon-Cockney while the artists spoke “proper English,” drawing distinctions between Chekhov’s characters that do not appear—at least in my reading—in the original.
Some of the actors, particularly the young ingénue Romola Garai (playing Nina), simply did not have the acting abilities of more minor figures, such as William Gaunt’s Sorin—who alternated with Ian McKellen (who was also performing in Lear). While as a character Nina may be unable to act, as an actress her performance must match the level of the others of the cast or the dreadful chorus of these braying dogs becomes occasional howls alternating with yaps.

Finally, the Royal Shakespeare Company literalized Konstantin’s early suicide attempt by forcing characters and audience to hear the gun go off—an event that does not occur in the original—tragically prefiguring the final shriek of the gun.

How much better, I was reminded, was the American production from the 1974 Williamstown Theatre Festival, starring a very young Frank Langella, Blythe Danner, Olympia Dukakis, Lee Grant, Kevin McCarthy, and Marian Mercer—a splendid cast working as a true ensemble—a production preserved on tape.

In this version, we truly understand why Chekhov subtitled his play a comedy. For although The Seagull ends in death, Konstantin’s suicide is a ludicrous act based on absurd notions of fame and infamy, on a misunderstood sense of meaning, and a feeling of purposelessness. The so-called famous necessarily must convey to others their importance in the world or they will be robbed of their very identities. Those at the other end—the Konstantins, the Mashas, the Medvednekos—can only see themselves in this context as worthless, living without a reason. Yet the sacrifices they perceive themselves as making are only slightly different from their demand that attention to be paid to those in positions of fame. All are calling out so desperately, each in their own way, that they have no possibility of hearing one another. And in their cries, each has no time to truly observe the truths of life. Dorn’s quiet insistence at play’s end that Trigorin quickly take Arkadina away from the house only reiterates the lies on which each of their lives is based. Will Arkadina be able to accept the truth of her son’s death better at a distance given the fact that she has distanced all humans from herself throughout her life? By play’s end, we recognize that these dogs will howl wherever they are chained up for the night.


In late 2002, at the suggestion of the publisher of Archipelago Books, Jill Schoolman, George Malko (son of the famed Russian symphony conductor Nicolai Malko) sent me his translation of the complete short plays of Anton Chekov. The plays not only included Chekhov’s most famous short works, but sketches and skits that had never appeared in English before.

I read the book with great interest, suggesting that for the volume’s title we steal one of Chekhov’s own play titles, “A Tragic Man Despite Himself,” particularly since Malko was insistent upon revealing in these works that Chekhov was an author of comedies, not of melodramas or tragedies as his plays have often been represented.
In 2005 we published the 20 short works, including two versions of “On the Injuriousness of Tobacco” in a Green Integer edition of 456 pages, one of our longest books to date. The London Times Literary Supplement described these plays in 2007 as revising the way to see Chekhov: “For Chekhov, farce is a glimpse of hell only momentarily obscured by laughter. It's surely the case that we can learn about the hinterland of those masterpieces from the environments Chekhov created as backdrops to farce. And, in fact, there are parallels and echoes with the plays we know best: outbreaks of fire (Three Sisters), distant railway lines that promise illusory escape (The Cherry Orchard), murderous attacks that come to nothing (Uncle Vanya). There are oddly inconsequential moments—a postman enters a tavern, downs a drink, pays and leaves without saying a word—and characters frequently talk to themselves. Above all, as in The Seagull, there are realizations of the failed, anti-climactic theatricality of life itself. With help from an aging prompter, the equally aging actor of "Swan Song" performs solitary scenes from Hamlet and King Lear in an attempt to elevate his own sense of self-disgust. Looking out at an empty auditorium he sees only a "black bottomless pit, just like a grave, where death itself is hiding."
Over the years George and his wife Elizabeth and I have become good friends. When I recently told George that I was writing a piece on the Royal Shakespeare production of The Seagull, he told me he was at work on a new translation of the play—which obviously Green Integer will want to publish.