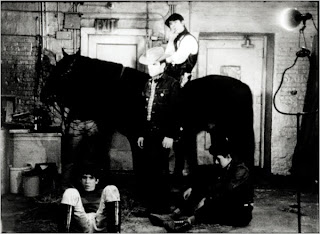 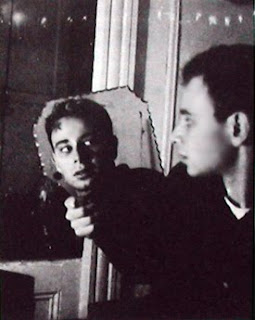 guns
2 bottles of milk, four drinking glasses
a pack of playing cards
3 land deeds
something for the horse to eat
Faust tape


[After the Credits are read, KID will perform as many tricks on the horse as he can devise. The other three will stare at the instructors in the stances that have been chosen for them, SHERIFF and MEX standing, TEX reclining.]

[KID will lean forward on the horse and make love to it, mushing his face in the mane.]

TEX: Get down from that there horse, Kid.
SHERIFF: [Shocked] Why, it's the Kid!

[KID gets down from the horse. TEX stands up and makes love to the horse.]

SHERIFF: Don't turn your back on me!
KID: You're a tinhorn.

[KID will sing the following song:]

KID: I'm the Kid from Laramie,
Hang me on yonder tree.

I come ridin' off the plain
Out o' the wind and rain
A-seeking just one friend,
But, friend, this here's the end.

Here's a handsome town
An' I been goin' round and round
But nowhere can I find
Two pokes with a single mind.

I met up with this lone cow poke,
He said being pards is just a joke;
I told him quit your laughin', pard,
Them is words that's mighty hard.

[KID, TEX, and SHERIFF proceed to make love to the horse, rubbing its mane, kissing its muzzle, massaging it along the flanks, kissing its back, legs, and behind.]

[KID will make advances to TEX, trying to put his arm around him and get friendly. TEX will repel KID hastily. KID will stand by embarrassed and lonesome. SHERIFF will open his shirt, exposing his chest. KID will take notice and watch SHERIFF with great interest. KID imitates SHERIFF, opening his shirt. SHERIFF looks at KID slowly and sizes him up. SHERIFF and KID smile at each other. SHERIFF goes over the KID and stands next to him. KID puts his arm around SHERIFF's shoulder and begins singing again. SHERIFF rubs his privates while KID sings.
Suddenly they break up and SHERIFF, KID and TEX rush back to the horse and start making love to it again.]

[They all take the land deeds, smiling evilly. Then SHERIFF, TEX, and KID beat up MEX. Much confusion and noise. MEX ends up in a heap on the floor.]

SHERIFF: I'm as pleased as Punch.
KID: You're a tinhorn.
TEX: Guy like that ain't got a chance.
SHERIFF: Indians done it.

[SHERIFF, TEX and KID will resume original positions. MEX struggles to his feet and comes forward for close-up. He looks evilly into the camera. He improvises curses in Spanish.
MEX will walk back and climb onto the horse. He will do all sorts of obscene things on the horse, gestures, intimations, suggestions of bestiality. He will take off his boots. Disgusted looks from the others, holding of their noses. MEX will run his toes through the horse's mane. Shock and horror of the others who rush to the horse's rescue, push MEX off the horse, and resume kissing and fondling the horse as before.
Then SHERIFF, KID and TEX will resume their original positions.
MEX, cursing away in Spanish, will climb back up on the horse and recline on it, but in such a way as to reach over to SHERIFF's fly with one foot and start to unzip his fly.
SHERIFF will relax and enjoy the procedure.
Both SHERIFF and MEX look at each other and smile knowingly.]

SHERIFF: To think I could have killed you a thousand times.
MEX: I'll bet you're glad now that you didn't.

[KID goes over to SHERIFF and examines his open fly.]

MEX: I'm not an onanist.

[SHERIFF, KID, and TEX resume kissing the horse. They kiss MEX's feet during the process.]

[SHERIFF rubs his privates meaningfully, but speaks as if he were dreaming.]

SHERIFF: Someday there's gonna be law and order in this here land. Ain't gonna be no more Mexes.

[SHERIFF and KID turn around and look at MEX. They appraise him sexually.]

[SHERIFF, KID and TEX turn around and shout in anger at MEX.]

SHERIFF: You ain't got no rights.
KID: You can't love nothing.
TEX: Get down off that horse.

[SHERIFF, KID and TEX pull MEX off the horse and beat him up again. Much noise and confusion. MEX ends up on the ground. There is much feeling of MEX's privates during the struggle. They tear off his shirt.
KID resumes his place on the horse. He does some tricks. KID sings again until the end of the reel.]

END OF REEL ONE.


[The characters all as in end of reel one with KID singing a stanza of his song for continuity.]

[SHERIFF takes out his gun and aims it at KID.]

[KID whips out his gun and shoots SHERIFF in the shoulder.]

KID: Milk! Milk for everyone!

[MEX rushes over to the milk bottle and pours a glass of milk for everyone. He hands out the glasses. The four proceed to drink the milk slowly, obscenely, the milk runs down their chins and over their clothes.]

MEX: Did you enjoy that?
KID: It was beautiful.
TEX: Indians sung it.
KID: That's what we need around here. A little civilization and culture.
TEX: It was beautiful.
SHERIFF: What's your real name, Mex?
MEX: My real name is Dale Evans.
SHERIFF: Damn! I knew you was the smartest horse in the movies.

[MEX begins to feed the horse.]

[KID, TEX, and MEX look at SHERIFF as if he were nuts.]

[The four form a group on the floor practically under the horse's belly and begin to play strip poker. KID loses the first round and takes off his hat.]

[Another round is played.]

SHERIFF: You lost that one, Mex!

[MEX takes off his shirt.]

MEX: I ain't got a chance with 3 gringos!
SHERIFF: Get going, and don't you never open your trap.

[KID loses the next round and takes off his shirt.]

[MEX loses the next round.]

[MEX and KID both take off their trousers and sit in their underwear.]

MEX: Aie!! It is cold in your country!

[They continue playing and swilling the milk. Finally, SHERIFF loses a round.]

[MEX, KID and TEX rush at the SHERIFF. They all tie him up with one belt, first hands and then they tie the belt to the horse's reins. They take turns whipping him with the other belts. MEX kicks SHERIFF, etc. Much yelling and crying out with pain and joy. KID sings during this scene.]

KID: Beat it, beat it!
Get along, get along.

Beat it, beat it!
Get out of town.

MEX: There's no time for that now. We gotta get out of here fast.
KID: You're too good a man, Sheriff, to die for nothing.
MEX: Get in the rig, Mary.
TEX: Yeah, Indians done it.
KID: Where you headed for?
TEX: Out west. I'm going west.
KID: I'm scared, scared of what might happen.
MEX: Keep a-going!
KID: We was just funnin', wasn't we?
TEX: Yeah, having good old cowboy fun.

[The finale of Faust plays again on the recorder. MEX and SHERIFF resume their parody of the roles. TEX and KID drink milk.
This goes on to the end of reel two.]

Ronald Tavel's numerous plays include Gorilla Queen, The Life of Juanita Castro, The Life of Lady Godiva, Kitchenette, How Jacqueline Kennedy Became the Queen of Greece, The Last Days of British Honduras, Gazelle Boy, Tarzan of the Flicks, Boy on a Straight-Back Chair and numerous others. Tavel wrote many screenplays for Andy Warhol, and was the founder of The Theatre of the Ridiculous, writing its one line manifesto: "We have passed beyond the Absurd: our position is absolutely preposterous." Tavel died in 2009 on a plane returning from Berlin to Bangkok, where he lived.

Posted by Douglas Messerli at 8:15 AM