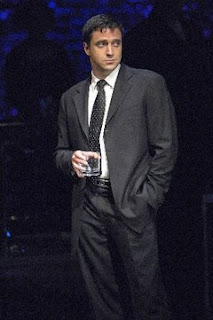 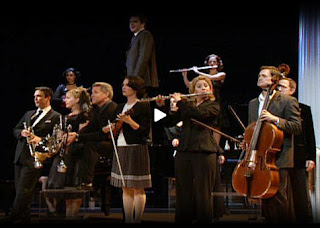 CONVINCING THE SOLOIST TO JOIN THE BAND
by Douglas Messerli

For the past decade or so I have attended several Broadway musicals—new works and revivals—with tears welling up in my eyes in blissful appreciation for any work whose score is based on more than a triad of notes (I’m convinced that contemporary musical composers have been taught that Broadway musical numbers can waver only between three notes, pitched either louder or softer to give the songs a sense of dramatic action). And the 2006 revival of Stephen Sondheim’s and George Furth’s Company was no exception. In the partially empty balcony of the Ethel Barrymore Theatre I sat alone and joyfully wept.
There is much in Sondheim’s lyrics and music, moreover, for which to be grateful. Any musical with such numbers as “The Little Things You Do Together,” “You Could Drive a Person Crazy,” “Another Hundred People,” “Getting Married Today,” and “The Ladies Who Lunch” almost has a right to describe itself as a “classic.”
Director John Doyle, using—as he did in his recent revival of Sweeney Todd—his performers both as singers and musicians, revealed new layers of meaning in this work, particularly in the scolding saxophone trio of Angel Desai, Kelly Jeanne Grant and Elizabeth Stanley in “You Could Drive a Person Crazy.” The cast is composed of remarkable singers, with star Raúl Esparza, in particular, coming to life in his final musical declaration of love in “Being Alive.” Barbara Walsh, playing the acerbic, increasingly alcoholic character Joanne, almost matches the intensity of Elaine Stritch in the original 1970 production in her rendition of “The Ladies Who Lunch.” Indeed, this revival received remarkably positive review coverage, with The New York Times noting of the characters: “They all blossom as musicians and singers of wit and substance. As soloists they’re more than adequate, but it’s their work as a team that sounds new depths in Company, that gets under your skin without your knowing it.”
Despite my need from time to time, however, to wipe away my tears of joy, by the end of this musical I felt as if I had been manipulated to love a work of no great significance that far from penetrating my heart, remained oppressively flat against my chest.
I know that critics of the 1970 version (with Stritch, Dean Jones, replaced by Broadway veteran Larry Kert, Donna McKechnie, Barbara Barrie, and other such talented figures) saw this as a work plumbing great depths of meaning, in particular the shallow, self-centered lifestyles of the 1960s middle class; today, however, the musical seems not only dated, but is, at center, a hollow, fairly meaningless piece. The story of Company—if you can describe it has having any narrative continuity—is quite simple: a group of 10 married, divorced, and soon-to-be married friends, along with three of Bobby’s girlfriends, gathers in various vignettes (Furth had originally written this work as a series of short stories, which, with the prodding of legendary producer Harold Prince, he wove together) surrounding the annual celebration of Bobby’s birthday, where they ponder his unmarried state. Why, despite his claims he is ready to marry, does Robert remain a bachelor? We are presented through their examples, meanwhile, with many of the problems plaguing married life: infidelity, drugs, alcohol, verbal abuse, the embracement of ridiculous fads, etc. that might be said to characterize wealthy New Yorkers in the decade devoted to the art of the self.
Bobby’s friends, in turn, each seek something vaguely different from him: several of Bobby’s male friends see him simply as a model of the freedoms they sacrificed for their married life; many of the women flirt and toy with the boy-man free from their connubial restraints. At the most extreme of these vague desires is Joanne’s attempt to get Bobby into her bed, and a male friend’s suggestion that they try a homosexual relationship. As a group, however, their one and only concern is how to get Bobby to join their marital sufferings and occasional joys, or, to put the characters’ actions into the metaphor of this production, their major activity consists of trying to convince the soloist to join their band.
All of this may have seemed slightly naughty and terribly clever in 1970, but the boozed-up, pot-filled nights this musical portrays seem to inspire today more yawns than titillation; and the idea that Bobby is innately to be seem as pitiable for being a bachelor seems fairly absurd in a time when gays and lesbians have helped to rid us of shock that someone may not be “the marrying kind” (it should be noted, however, that the character Bobby is adamantly heterosexual; with the opening of Company, however, Esparza admitted that he, himself, was gay; composer Sondheim is also gay, evidently a late-life perception).
Throughout this seemingly endless discussion of what marriage is and isn’t, Esparza is given very little to do but sit or stand looking slightly teddy-bearish and bemused, a situation which set designer David Gallo’s three Lucite tables and large centerpiece of a extraneous glass sculpture, doesn’t help. There is often literally nowhere for him to go except to hoist himself atop the stage piano.
When Bobby, who throughout the work has been talked at rather than talked to, finally has enough of this loving “company,” and fails to show up at his yearly birthday celebration, we are encouraged to see it as a first step in his integration into a society fulfilled by love and, ultimately, marriage. Given Furth’s and Sondheim’s fable which appears to award its primarily heterosexual, middle-aged and senior audiences by first titillating them with the joys they may be missing and then praising the wedded conditions of their lives, however, it is awfully tempting to see Bobby’s disappearance as an abandonment of further aging rather than an embracement of some new “maturity” or a desire for a monogamous relationship. One can imagine a Bobby so sick of his fawning, self-complaisant, straight friends that he has no choice but to retreat to eternal adolescence, a world without such narrow social constraints.