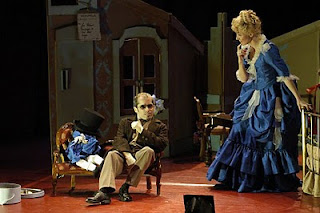 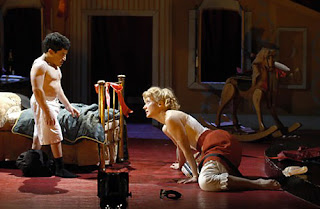 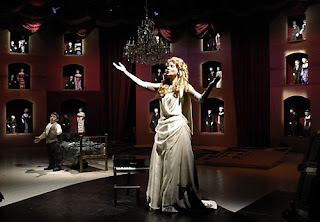 Indeed, Breuer and Mitchell draw on the whole bag of dramatic styles—tragic, histrionic, melodramatic, comic, farcical, and absurdist (a demonstration akin to the various dramatic genres named by Hamlet’s resident pedant, Polonius)—to point up the implications of Ibsen’s dialogue.
I have always thought Ibsen’s plays to be close to spoken operas, something which apparently also struck the creators of Mabou Mines DollHouse, as the drama morphs into a representation of an opera house (stunningly designed by Narelle Sissons), each box seat filled with male and female puppets, paralleling the now larger-than-life Nora playing the miller’s beautiful daughter to Helmer’s Rumpelstiltskin as she sings an operatic aria of her desire for a miracle that never occurred. Pulling away her clothes to reveal her breasts and mons pubis, this Nora, in her declaration that she longer believes that wonderful things might happen, whips off her wig of golden locks to reveal a shaved head before she slams the door to the box in which she has been entrapped. If the play began in the 19th century, it ends in the possibility that in the future men may live in an empty world where women powerfully avenge the wrongs they have been forced to suffer.