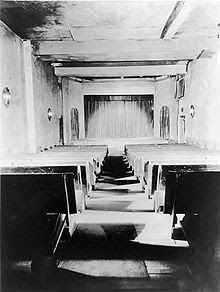 FOOD FOR LOVE
by Douglas Messerli

In the summer of 1914, Alfred Kreymborg was invited to the Connecticut art colony named Silvermine, founded by the British art critic Charles Caffin and his wife. While there, the poet and former editor of The Glebe, worked on his manuscript titled Mushrooms, published in 1916, in which several of the pieces were written as prose poems with rhythmic dialogues, an example of which I've reproduced below:

These dialogue poems, in turn, influenced in part by the thinking of Gordon Craig, who argued for directorial dominance in the theater, with the use of actors as mere marionettes, encouraged Kreymborg to try his hand at playwriting. Adding his own love of and knowledge of music as well, Kreymborg wrote a short play, "Lima Beans," one of many throughout his career.
"Lima Beans," in particular, allowed Kreymborg to combine his poetic talents with his philosophical sense of humor, without applying the stylized poetic conceits that often appear his poetry itself.

Kreymborg's comic gem has very little "plot." A wife, recently married, decides to change the basic ingredient of her husband's diet, just for variety's sake. Calling out to the passing Huckster, whom we see briefly only twice from the window, the wife orders up some string beans instead of the usual limas. Upon the husband's arrival home from a day at work, the two fall into what has clearly become a pattern of domestication which, at moments, seems almost as abusive as Helmar's descriptions of Nora in Ibsen's A Doll's House ("good mouse," "queer little dear," etc.). But their relationship is fresh, and they remain in love, each kissing one another "daintily six times."

Ready for his meal, the husband declares his hunger, as she nervously brings forth the serving bowl. His immediate disgust is quickly established, as he throws out its contents, sputtering out his anger as if he were a Shakespearian King having witnessed the downfall of his kingdom:

I perspire tears and blood drops
in a town or in the fields
on the sea or in a balloon,
with my pickaxe or my fiddle
just to come home
footsore, staring, doubled with appetite
to a meal of —string beans?
Where are my limas?
.....
You would dethrone it?
You would play renegade?
You'd raise an usurper
in the person of this
elongated, cadaverous,
throat-scratching, greenish
caterpillar—

His victim collapses in horror, as he hastily leaves the house. The comic ridiculousness of this domestic spat satirizes not only the role of any housewife who is subjected to her companion's tastes, but demolishes the notion that there can of any experimentation in this couple's relationship, making anyone who has lived with another being unable to accommodate changes in his or her life uncomfortable, in the way that Henri Bergson argues comedy always does.
With what Kreymborg describes as "housewifely shrewdness," the woman calls back the Huckster, quickly buys some lima beans, and deftly cooks them, just in time for her husband's return to apologize.

The slightness of these themes, however, is more than made up for in the musical phrases of the quick-paced dialogue (including the stage descriptions); and, although I have never seen a production of this play, one can imagine the marvelous potentialities of the actors (or, perhaps, even puppets, as Kreymborg suggested it was to be cast).

Evidently, the famed human cast, poet and artist Mina Loy, poet and doctor William Carlos Williams, and artist-designer William Zorach, easily took up the task, reading the "score" with great gusto, Loy clearly sensing the issues of the marriage theme, and Williams, according to Kreymborg, "in terror lest he blow up." Williams writes that Zorach sang his role "with zest and vehemence," looking somewhat like Harpo Marx.

Both Loy and Williams wore costumes of their own making, Loy stunningly dressed in a green gown and one of her own hand-made broaches, which according to Kreymborg, was "not in keeping with Mrs. Lima." The curtain created by the Zorachs, apparently was dressed as Kreymborg conceived it, "painted in festoons of vegetables," and performed admirably, coming down--since, the author admits, it cannot see and has no comprehension--in the midst of the husband's final question, which may have been an invitation to sex.