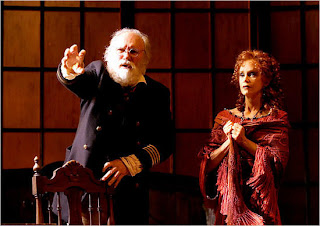 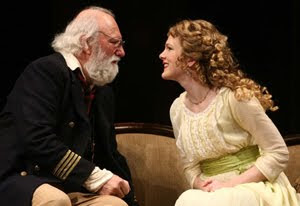 “It is difficult to say whether indifference and neglect are worse than false doctrine; but Heartbreak House and Horseback Hall unfortunately suffered from both.”
—George Bernard Shaw, from his "Introduction" to Heartbreak House

When I announced to my companion Howard in December that I would be seeing George Bernard Shaw’s Heartbreak House in New York, he asked me, with a kind of bemused innocence, whether anyone still read Shaw!
I paused to consider the question, ready as always to spring into defense of any writer of great stature ignored by his or her public. But after a few moments, I admitted, “I doubt anyone who isn’t studying drama in the university reads Shaw these days.” Of the dozen or so literary friends I asked while I was later rereading the play, only one had read the work, some of my friends confusing it, momentarily, with Dickens (Bleak House, I presume).
After witnessing the performance at Roundabout’s American Airlines Theater, accordingly, I also felt saddened to think that Shaw had come to be so ignored. For despite the fustian fervor of his ideas, Shaw is extremely witty, funnier at times than Oscar Wilde was on his most aphoristically clever days. Shaw’s witty observations, moreover, rather than resulting in the kinds of clever one-liners that characterize most modern and contemporary comedies, cascade into a series of near-unstoppable character interactions and asides which in their very energy almost devour each other as the audience struggles to keep up. Life in the Sussex “fine evening” as presented in Heartbreak House is not for the slow of mind.

Hesione Hushabye (brilliantly played in the version I witnessed by Swoosie Kurtz) has invited Ellie Dunn to her country house, primarily to thwart Ellie’s “romance” and marriage to Boss Mangan, a boorish industrialist whose mind functions as swiftly as a turtle on the run. Upon Ellie’s arrival no one bothers to greet her, and she is left to the strange inattentions of Mrs. Hushabye’s aging father, Captain Shotover (Philip Bosco), and the ineffective sympathy of their servant, Nurse Guinness, who wanders in and out dispensing Cockney-like endearments such as “ducky” and “poor lamb.” The Captain, who lives in a world apart from those around him, also moves in and out of rooms (as well as, we later discover, in and out of sobriety) in his attempt to attain “the seventh degree of concentration.” Miss Dunn, he proclaims, is the daughter of his boatswain, originally a pirate in China!
Superficially patterned after the boulevard farce, Heartbreak House brings together all its players: Lady Utterword, Hesione’s sister—whose existence her father appears to have utterly forgotten—followed soon after by Ellie’s father, the wise fool Mazzini Dunn, and the very man with whom Ellie has just confided to Hesione she has fallen in love, Marcus Darnley—in truth Hector Hushabye, Hesione’s husband. Boss Mangan and Lady Utterword’s brother-in-law, erstwhile lover, Randall enter soon after. The cast is complete.
Together these absurd beings, egged on by the three incredibly beautiful women at their center, reveal all the silliness, idle indifference, and cultural emptiness of the British gentry. Shaw’s aim is clearly to satirize, but the topsy-turvy nature of the characters, as they implacably fall in and out of love with one other, provides us with a splendid melodrama. In fact, we soon discover, each is busy hatching up plots of how to use the others in the search for.... Well, that is the problem, for these folks’ actions have no true goal. Little has meaning outside of the characters’ hilarious machinations. For this reason Shaw’s humor is far more profound than any standard farce. While each character speaks poignantly of his or her need for love and belief—while forced to remain in a country (or country house) that breaks all human hearts—desires and values, we quickly recognize, shift in the span of a heartbeat. Except for Mazzini Dunn’s flatfooted honesty and the mysteriously twisted aphorisms of the ancient Captain, there is no truth behind their Schnitzlerian turns and twists.
I have never thought before of Shaw in this context, but as the play comes to its brilliant ending, as the collective whirlwind of near-meaningless proclamations, admissions, and confessions comes to a close, it is clear that this great playwright has created a work that, metaphorically speaking, resembles the kind of vortex of which Wyndham Lewis wrote in 1914—the year after Shaw had begun his play:

You think at once of a whirlpool. At the heart of the whirlpool
is a great silent place where all energy is concentrated. And there,
at the point of concentration, is the Vorticist.

As Heartbreak House moves into its quiet closing upon the terrace, war breaks out, the falling bombs, as in a Futurist fiction (one should recall that Vorticism is often referred to as a kind of English Futurism) resulting in these lost souls’ exhilaration, as—ordered into blackout—Hector races about the house setting it ablaze with lights. Miraculously, the bombs miss the mansion, falling instead in a nearby pit implanted with the Captain’s dynamite, where Mangan and a local burglar (the real pirate Dunn)—the later inexplicably absent in the Roundabout production—have run off to hide. The residents of Heartbreak House are heartbroken all over again, this time on account of the bomb’s missing their target! But, as Hesione and Ellie declare, there is always the chance “they’ll come again tomorrow night.”
And with that declaration, Shaw has said it all, revealed what lay at the heart of Britain’s—of Europe’s—World War I struggles. A vacuum, a vast whirlwind of meaningless activity, can only lead—as Lewis comprehended and sought out—to the concentrated center where the natural is destroyed, replaced by an abstraction of life.