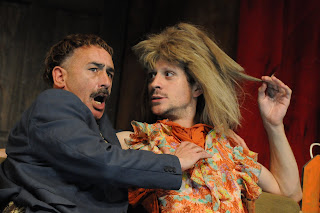 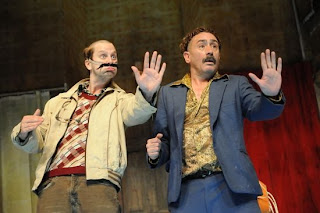 KEEPING TO THE SCRIPT
by Douglas Messerli

Enda Walsh The Walworth Farce / Freud Playhouse, UCLA (the performance I saw was on Saturday, November 14, 2009)

In a dilapidated South London apartment a relocated Irishman, Dinny, is busy massaging lotion into his shaved head, while in the other room his son Blake is casually slipping into a woman's dress. Enter the second son, Sean, who has evidently been out shopping and, upon unpacking his groceries, discovers, to his great dismay, that he has been given the wrong package. We sense something is about to begin, and before we know it, the three have begun a farcical drama incorporating outlandish switches of costume, scene, situation, and even genre.
Dinny's "play" has become for these three a ritual act, the very source of drama, wherein night after night they perform a ludicrous creation that with each performance becomes more and more "real."
The imagined "reality" concerns a rich brain surgeon living in Cork (Dinny) whose mother has just died and soon comes to loggerheads with his older brother over the mother's will. Meanwhile, Dinny's wife cooks up a chicken in the kitchen, while the brother's wife flirts with Dinny in the living room along with another woman (of uncertain origin, the plot becoming absurdly confused at this point), all played by Blake with lines occasionally spoken to the various wigs raised into air, while Blake and Sean spring into new roles and costumes. At one point the mother seems to be involved in the plot to murder the brother so that they can inherit the money, pouring a poison sauce over the chicken while various other figures run in and out of rooms. This is after all a farce!
The performances by Michael Glenn Murphy (Dinny), Tadhg Murphy (Sean), and Raymond Scannell (Blake) are all quite brilliant—as they should be! With a kind of reversal of ancient Greek theater, where the best playwrights were awarded, Dinny proffers a plastic trophy each evening to the best actor, usually himself.
On the particular evening we're witnessing, however, things get in the way. As we have seen, Sean, the only one briefly allowed out of the house, has brought home the wrong food/props. Dinny and Blake soon discover that a conversation with the check-out clerk has disconcerted him. A knock on the door startles the performers, who cautiously undo the door's several locks to discover the clerk herself, a Black woman named Hayley, come to bring him the right bag. Nonplussed by the intrusion, Dinny calmly enlists her as an actor. When she insists she cannot stay, that she is only on a break from work, it suddenly becomes apparent that it was not an invitation; her role will be enforced.

We now begin to perceive, as the play progresses, that the work is less a farce than a kind of lunatic murder mystery, a mad justification of a violent rampage that left the family motherless and ended in their escape from Cork to the British capital; and the implications of those murders suggest that Hayley will never be allowed to leave the house alive.
As the other "reality" of the situation begins to dawn upon Sean, he breaks character again and again, utterly frustrating Dinny as he tries to keep to the script, reenacting his insane fabrication as smoothly as he can. Yet the comedy increasingly spirals into tragedy as Sean begins to reveal some of the truths: Dinny was a simple laborer and apparently turned violent upon the family, escaping without the children to England, the children being sent later on into their father's hands.
The actors, now including Hayley—whose dark Black face has been crudely converted through a
slathering of white lotion by Dinny into "white face"—sputter out their lines, Sean increasingly moves away from the script, until he is locked in a closet by his brother, Blake, who takes up a knife and kills his own father. As he frees Sean from his imprisonment, Sean, in turn, stabs Blake, while in the midst of this melodramatic mayhem, Hayley bolts.
The significance of all that has happened and the inevitability of what will now happen in the "real" world is suddenly brought home to Sean. He will never be able to live out his fantasy, to travel to Bristol with his new found friend. Putting black boot polish upon his face, he leaves the house as another being, his own identity having been lost in the performance.
Despite the hilarity and suggestiveness of this play, however, I have some reservations about the work. As I have written elsewhere (see My Year 2002 for example), works centered in farce and based upon the camp aesthetic, as this one seems to be, often put the audience in a difficult position where they find it almost impossible to empathize or even sympathize with such extreme figures. If Walsh's plot is absurd and ludicrous, so too is the Irish family it portrays. The important thing in such works, as in Tennessee Williams' A Streetcar Named Desire, I argue, is to introduce into the story a character grounded in the real, whose relationship with the extreme figures brings them some credence and provides them some emotional perspective.
Walsh obviously attempts to do that with the figure of Hayley, whose very "ordinariness" and acceptance of these ridiculous beings helps to humanize them. Yet Hayley's actions in The Walworth Farce consists primarily of her cowering in the kitchen, and her role is too small to lend much depth to the three adult men supposedly performing a ritual based on lies night after night. The deaths of Dinny and Boyle, accordingly, do not so much shock us as "relieve" the viewer from attending the horror show with which they have bombarded him.
Sean's final actions ultimately seem to have less to do with finding a new self than with discovering reality, whatever that might mean, something we doubt this permanently infantile character will ever be able to accomplish.