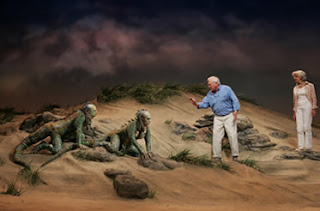 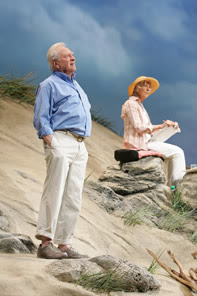 A retired married couple, Nancy and Charlie, are enjoying a seaside beach. She is painting; he, resting on a nearby blanket. The only interruption of their obvious pleasures is the roaring of a jet plane.

We soon discover, however, that other less pleasurable issues lie just below the surface. Nancy
enjoys the day so thoroughly that she would like to “stay [on the beach] forever!” She loves the water, the air, the sand, the dunes, the beach grass, and the sunshine, and imagines the possibility of moving from beach to beach, going “around the world and never leav[ing] the beach…” The more practical Charlie scoffs at the notion. But she persists: it’s necessary to find out what he really likes and “make all the plans.” But Charlie, clearly, prefers doing nothing, just vegetating: no planning for enjoyment is in his view of the short future they may have left.

So Albee’s Pulitzer Prize-winning play Seascape begins. It’s a small spat, a typical domestic debate, and on one level the play never seems to rise above this—the small, domestic issues of a healthy but slightly aging couple attempting to determine what to do with their future. Even the sudden appearance of a couple of marvelously colored lizards curious about these beachside interlopers doesn’t move the play far off topic: for the lizards not only speak fluent English, but they, too, are a monogamous couple attempting to determine what the future holds in store.

Despite some moments of terror, some suggestions of dark horror, and a great deal of humor as the two “animals” and two “humans” attempt to comprehend each other’s worlds, the play seems, as New York Times reviewer Ben Brantley wrote of the production I recently saw, to “lack emotional gravity,” to be perfectly likeable but also, in some way, “forgettable”— particularly in the context of Albee’s more highly emotionally pitched oeuvre.

In some respects, I agree. There is a problem at the heart of this play that relates to the text’s seeming insistence on a kind of realist fantasy. The lizards who seem ready to climb out of their watery domain into a Darwinian transformation seem too glibly linked by their author to their human counterparts; the humans, in turn, seem too ready to embrace them, to understand their dilemmas and even help them adapt to the brave new world they are about to enter. The human couple insist that there is no way for the lizards to return to the sea: “You’ll have to come back…sooner or later. You don’t have any choice.”

And we clearly recognize that the final lines of the play, the male lizard Leslie’s challenge to their offer of help: “All right. Begin.” is a hollow one, since the humans cannot even agree on to handle the issues facing their own lives. Should they act out a kind of desperate series of adventures to temporarily stave off what is soon to be their fate or should they, as Charlie’s actions suggest, curl into an eternal nap?

Part of the problem that arises in the current production is that the wonderfully able actress
Frances Sternhagen may not have the best choice for the role of Nancy. In the original play the role was performed by Deborah Kerr, and, although I never saw that production I can imagine the kind of plucky common sense (witnessed in Kerr’s role as a nun in Heaven Knows, Mr. Allison) and the slightly romantic and dreamy figure (as she played in The King and I) that might allow the mix of reality and fantasy so necessary in this work. Sternhagen plays the role, rather, as a kind Connecticut do-gooder against George Grizzard’s curmudgeonly city-dweller, and the mix doesn’t allow the play to slip into the metaphoric dimension into which it seems naturally to want to expand.

I think Albee is not at all interested in the redemption of two bestial creatures, but in the
possible redemption of a human couple’s life. As Charlie points out, it would be impossible to recount to anyone their conversation with two lizards. The lizards are, after all, not “real” but phantasmagorical mirror images of the couple themselves. Charlie’s own childhood activity of standing and sitting for long periods at the dark bottom of bodies of water is paralleled by the former activities of their lizard counterparts. In short, he has always had the predilection to return to a beast-like state. On the other hand, Nancy, not unlike the giant birds the lizards recognize in the passing airplanes, is almost ready to fly away in her own extended visions of possibility. In order to live life to its fullest does one have to chase the future until, utterly exhausted, one falls into one’s grave? To be an actively living species does it necessarily mean one has to embrace every possible Darwinian change?

The vision this human couple share, that they indeed are not very different from the beasts from which their kind sprang, is, perhaps, an obvious one, even a fairly likeable conclusion (if you’re not a religious fundamentalist) — but it is not forgettable, or at least should not be forgettable. For it is that vision that leads us to these very questions and the solutions necessary for the successful continuation of our lives. If war between the sexes and between generations is the subject of many of Albee’s dramas, it is the possibility of peace that he here proposes. We have to help one another, he implies, to begin living the human potentiality of our lives.