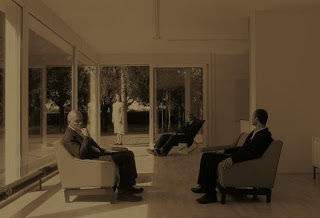 From a production of The Intruder by Ana Torfs, 2004

THE INTRUDER
by Maurice Maeterlinck

THE THREE DAUGHTERS
THE GRANDFATHER
THE FATHER
THE UNCLE
THE SERVANT

The Intruder was first performed at Paul Fort's Theatre d'Art in Paris on May 20, 1891 as L'Intruse