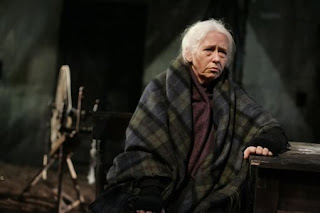 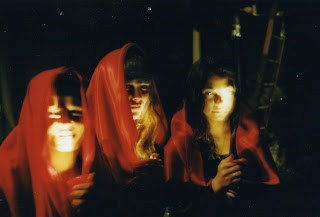 RIDERS TO THE SEA
A Play in One Act
by J. M. Synge

SCENE.
—An Island off the West of Ireland. (Cottage kitchen, with nets, oil-skins, spinning wheel, some new boards standing by the wall, etc. Cathleen, a girl of about twenty, finishes kneading cake, and puts it down in the pot-oven by the fire; then wipes her hands, and begins to spin at the wheel. NORA, a young girl, puts her head in at the door.)

CATHLEEN She's lying down, God help her, and may be sleeping, if she's able.
[Nora comes in softly, and takes a bundle from under her shawl.]

CATHLEEN [Spinning the wheel rapidly.]
What is it you have?

NORA The young priest is after bringing them. It's a shirt and a plain stocking were got off a drowned man in Donegal.
[Cathleen stops her wheel with a sudden movement, and leans out to listen.]

NORA We're to find out if it's Michael's they are, some time herself will be down looking by the sea.

CATHLEEN How would they be Michael's, Nora. How would he go the length of that way to the far north?

NORA The young priest says he's known the like of it. "If it's Michael's they are," says he, "you can tell herself he's got a clean burial by the grace of God, and if they're not his, let no one say a word about them, for she'll be getting her death," says he, "with crying and lamenting."
[The door which Nora half closed is blown open by a gust of wind.]

CATHLEEN [Looking out anxiously.]
Did you ask him would he stop Bartley going this day with the horses to the Galway fair?

NORA [In a whisper to Cathleen.]
She's quiet now and easy; but the day Michael was drowned you could hear her crying out from this to the spring well. It's fonder she was of Michael, and would any one have thought that?
CATHLEEN [Slowly and clearly.]
An old woman will be soon tired with anything she will do, and isn't it nine days herself is after crying and keening, and making great sorrow in the house?
MAURYA [Puts the empty cup mouth downwards on the table, and lays her hands together on Bartley's feet.]
They're all together this time, and the end is come. May the Almighty God have mercy on Bartley's soul, and on Michael's soul, and on the souls of Sheamus and Patch, and Stephen and Shawn (bending her head]); and may He have mercy on my soul, Nora, and on the soul of every one is left living in the world.
[She pauses, and the keen rises a little more loudly from the women, then sinks away.]
MAURYA [Continuing.]
Michael has a clean burial in the far north, by the grace of the Almighty God. Bartley will have a fine coffin out of the white boards, and a deep grave surely. What more can we want than that? No man at all can be living for ever, and we must be satisfied.
[She kneels down again and the curtain falls slowly.]
Posted by Douglas Messerli at 10:43 AM