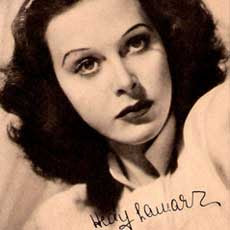 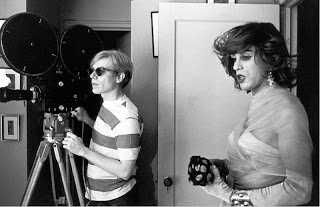 
LIVES AND LOVES OF HEDY LAMARR
or, HEDY GOES SHOPPING

a scenario by Ronald Tavel


SCENE I: THE OPERATION ROOM

Zoom out with HEDY's head, the back of her head; she is having a face lift. Hairdresser (a DOCTOR) is working on her wig. A SECOND DOCTOR is working over her face which we cannot see. Much excited talking between the three. Hedy keeps asking how she will look with this new face lift, will she be beautiful, etc. DOCTORS are very excited about their work, groan with ecstasy and anticipation.

some lines:
HEDY: Oh, doctors, will I be beautiful with my new face lift? I have to be beautiful you know because I am the most beautiful woman in the world, everybody says so; all the gossip columnists and beauty experts and Edith Head say so.

DOCTORS: Magnificent, magnificent, my child! This is my greatest creation. Not since Bride of Frankenstein has anything equaled this! Turn your puss just a bit, my child, that's it.

Finally, the DOCTORS finish their work, stand back from her and turn her around. She faces the camera.

some lines:
HEDY: I am rich and bored and young and beautiful and bored.

DOCTORS: Well, you could use the rest Miss Lamarr.

HEDY: Mrs. Lamarr — I've been married 5 times. Cost me half a million to shed my last husband. Don't think I would forget that very easily, do you?

DOCTORS: Your public still loves you, Mrs. Lamarr, even if your husbands don't.

She gives them the hemlock in ornate glasses and the DOCTORS drink it and die. HEDY comes forward for a close-up.

HEDY: Just like in my movie "White Cargo". These foolish men die so easily from the hemlock. Or the quinine. Or whatever it is. Men are just playthings to me. How can anything that dies so easily be more than a plaything? Well, if I can't be in movies, at least I can go shopping!!!

HEDY enters the department store with her several husbands. She refers to them as HUSBAND NO. 1, HUSBAND NO. 2, etc. She goes up to the SALESGIRL, after singing a song and dance routine with all her HUSBANDS, and asks to buy a lot of goods.

SALESGIRL: Got any money on you, honey?

SALESGIRL: Little girls ain't allowed to have charge accounts in this here establishment.

SALESGIRL: You is a 14 year old gun moll juvenile delinguent!

HEDY goes back to her HUSBANDS and tells them that the scene is cool because the SALESGIRL doesn't recognize her and that they can lift anything they want. HEDY will distract the SALESGIRL.

HEDY: First a face lifting, then some shop lifting.

HEDY distracts the SALESGIRL, engages her in girl-to-girl talk about dates, cosmetics, clothes, movies, etc., while her HUSBANDS empty out the department very systematically.
But just as the job is nearly complete, and HEDY moves to make her getaway, a POLICEWOMAN in plainclothes, the store detective, moves in and makes the arrest.

HEDY: How ridiculous! I'm Mrs. Lamarr! I have 14 thousand dollars worth of checks in my pocketbook personally addressed to me so why should I steal anything?

POLICEWOMAN: You have emotional problems, Mrs. Lamarr. You feel the public doesn't love you anymore.

HEDY: How could the public not love the most beautiful woman in the world? There was an oversight in the studio, they forgot to buy me shoes for my role, so I thought I would pick them up.

POLICEWOMAN: You got emotional problems, Mrs. Lamarr. Let's go to your apartment and see what else you stole that's stored there.

There is a brief struggle, but the POLICEWOMAN wins and takes HEDY off. The SALESGIRL comes rushing forward, grabs a glass of hemlock like she was getting away with something, swills it down and drops dead.

The POLICEWOMAN and HEDY enter HEDY's apartment and the POLICEWOMAN is shocked to see all the furniture, etc, that HEDY has stolen.

POLICEWOMAN: O.K., I'll have to take you in.

HEDY: I'll be with you in a moment Officer. I wish to change into something more suitable.

HEDY changes clothes, sings a song and tries to seduce the POLICEWOMAN in order to escape the charges and be let free. The two fall all over the sofas, etc., there is a cat and mouse chase, HEDY really turns on the charm.

But after the seduction, the POLICEWOMAN still insists on taking HEDY to jail.

POLICEWOMAN: Sorry, Mrs. Lamarr, but that's the way it is. We detectives are the scum of the earth. Always get to knock off a piece of nuggy before bringing in whores, street walkers, drunks, boosters and stars with 5 husbands.

HEDY: Oh, where are my husbands now, where are they now to protect me? Where is my loving public? Care for a Hemlock cooler, dearie, it will really kill your thirst.

POLICEWOMAN: Oh, no don't. You can't pull that one on me. I may be dirt, but I'm smart dirt.

HEDY is taken into the trial room. All her HUSBANDS are called up and everyone is questioned about her off-color life, bad movies, pornography, etc., robberies, and all testify against her to the JUDGE. After each testimony, HEDY is cross-examined and she attempts to defend herself. But the verdict goes against her and she is sentenced to drink the Hemlock. All along she insists that she is not HEDY, but keeps saying, "I am Tondalayo!"
Finally, she drinks the Hemlock, goes into a long drawn out scene of death throes and at the last minute, croaks.

Questions of the JUDGE:
Why did you steal the love-seat?
Why was the movie "Ecstacy" banned. (Not because I was nude, but because I made love to a horse)
Why did you marry 5 times?
Why do you steal?
Did you ever slip Hemlock on the ice to anyone?
Did you get a face lift in order to disguise yourself like a common criminal? (I'm not common)
Are you now or were you ever a booster? (For my college football team)
Are you now or were you ever a cleptomaniac?
Ditto, a maniac?
Do you have emotional problems?
Are you the world's most beautiful woman? (My face is perfectly symmetrical; if you cut it down the middle both halves would be the same) Judge: —We will!