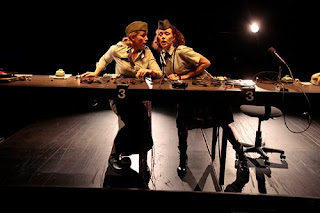 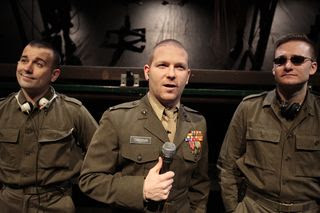 SHADOWING THE SHADOWS
by Douglas Messerli

James Strahs (author), performed by The Wooster Group North Atlantic / first performed with the Globe Theater Company in Eindhoven, Netherlands in 1984 and at The Performing Garage, New York, 1985 / The production I saw was performed at Redcat (The Roy and Edna Disney/Cal Arts Theater in the Walt Disney Concert Hall on Saturday, February 20, 2010)

It is 1983 aboard a U.S. military aircraft carrier, 12 miles off the coast of Holland. The action of the first four scenes all occur at the Operations Room, "Sometime," "Sometime Later," "Sometime Even Later," and "Sometime Even Later Than That," while Scene Five is supposedly at "The Club," and Scene Six "On Deck—Early the Next Morning." It hardly matters, for throughout all action takes place on a highly racked stage with a long table seemingly threatening to propel itself into the audience. Behind the table sit mostly women, most notably Ensign Word-Processor Ann Pusey (Kate Valk) and Master Sergeant Mary Bryzynsky (Frances McDormand), who along with others are seen busily threading and rethreading audiotapes while they toss sometimes banal, sometimes witty, nearly always bawdy statements at each other and the military men, Captain N. I. Roscoe Chizzum (Ari Fliakos), General Lance "Rod" Benders (Paul Lazar), and the two Marine Privates under whom and with whom they work.
Their job, we are told, is to intercept messages, to gather intelligence. But their actions seldom betray any mental intelligence and involve such quickly spoken and clipped sentences that it seems unimaginable that anyone, including themselves, might comprehend the language. Rather, we glean, perhaps as they do in their "interceptions," only quick stutterings from hundreds of films referencing war (From Here to Eternity, Sands of Iwo Jima, Operation Petticoat, Dr. Strangelove, The Manchurian Candidate, even South Pacific), punctuated by brief musical ditties ("Git Along Little Doggies," "Back in the Saddle," and "Yankee Doodle"), and silly and puny sexual references. The girls are hot for the men and Captain Roscoe and Colonel Lloyd "Ned" Lud seem always about to duke it out over the gals—except for their fascination with each other.
As in most the works by The Wooster Group, however, none of this "means" in the traditional sense. In fact most of the chatter, the dialogue of the play, is cut short time and again, with the sound of screeching aircraft, explosions, and doublespeak left hanging in mid-sentence. Like the messages these "sailors" are purportedly tapping into, what the audience gets is mostly feed-back, a perpetual chatter of cultural refuse that can never be truly decoded.
Reading the play—albeit the version I read was clearly radically changed by the 2010 production—one becomes even more intrigued by the endless sexual innuendos. Indeed, no sex actually occurs in the play; the big bash which was to have ended in the Miss wet uniform contest, is, just like everything else in this play, a shadow, an event that never happens. The constant sexual metaphors that fly between the women of this ship ("Hey, career girl, they're all beer heads. They drink beer right from the tap. All I've got to do is press the lever and they take it right down the throat. I can put in a coke bottle I'm holding between by boots...You got to make them squirt.") are just that, things of language, potentially dangerous, but not of the world of substance. Many of the women may hope for conventional lives, but it is hard to imagine that after the insanity of their military duty that any of them will ever be able to endure normality—however one defines that.
Rather than serving any military purpose, this vessel might be most closely compared to The Flying Dutchman, a ghost ship doomed to sail the seas, sending out messages to people living and long dead. In fact, we later discern, this ship is only a decoy for the "real" work being done 500 miles from what we are witnessing. In short, the world we encounter in North Atlantic is only a mirror of another such floating machine of decipher, which may in turn be just a shadow of another, and on and on, with no reality possible in a world where culture and imitation, parody, and camp have become inseparable. In this prisonhouse of language, gesture—at the heart of The Wooster Group's art—is the only thing that saves people from whirling off into space. With a growl, a grin, a randy scratch, a wistful smile, a grit of teeth, Captain Chizzum and his crew of ghosts seem, at times, hilariously alive, even when serenaded by Bach's "Come Sweet Death."