Douglas Messerli "Stage and Street" (on the writings of Stefan Brecht)

Bertolt Brecht and his son Stefan 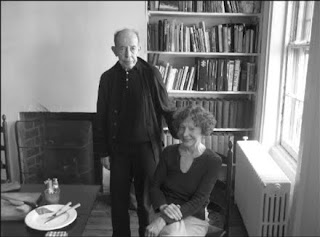 STAGE AND STREET
by Douglas Messerli

Theater historian and poet Stefan Brecht died, at the age of 84, on April 13th of this year (2009). The son of German playwright Bertolt Brecht and actress Helene Wiegel, Stefan was born in Berlin, and came to the United States at the age of 17, when his family escaped Nazi Germany by moving to Santa Monica, California, where they joined the growing German émigré community. When his family returned to Germany after Bertolt Brecht was forced to testify before the House Un-American Activities Committee, Stefan remained in California, attending UCLA and, later, Harvard, where he received his PhD in Philosophy.

In 1966 he moved to New York City with his wife, Mary McDonough Brecht and his two children, quickly becoming involved in the burgeoning experimental theater groups in Lower Manhattan. Brecht performed with the theatrical performance artist Robert Wilson and Charles Ludlam in his Ridiculous Theatrical Company.

In 1972 Brecht published a book detailing several of Wilson's performances titled The Theatre of Visions: Robert Wilson, printed in English by the German publishing house of Suhrkamp Verlag, thus beginning what was to have been a nine-volume series of presentations of what he described as "original" theater: The Original Theatre of the City of New York: From the mid-60s to the mid-70s. The mind boggles just thinking about Brecht's grand project, outlined as follows:

One can only imagine, had he accomplished this project, how much richer would be the history of our cultural heritage. As it happened, Brecht was able only to complete three of these volumes, The Theatre of Visions: Robert Wilson, Queer Theater, and Peter Schumann's Bread and Puppet Theatre. At the time of his death his was working on the Richard Foreman study.
To call these books "studies," however, would be inappropriate. Each of the volumes differ from the others, but all combine painstaking detail with an often irritating style that frequently overwhelms the works he is attempting to describe.

The Robert Wilson book, for example, consists of minute-by-minute descriptions of the performances, along with charts and maps, and Wilson's own notes that takes us through each production. These detailed descriptions, moreover, share each page with long footnotes describing events in even greater detail and explaining variations in the text.

Brecht's description of Wilson's renowned Einstein on the Beach, for example begins:

K 151
18.31
On the horizontal grey rectangle of the drop, (ft 52: American premiere of Robert Wilson's and Phil Glass' Einstein on the Beach: November 21, 1976, at the New York Metropolitan Opera. I am here describing the second performance, in the same place, the following Sunday, Nov. 28th, but include data re the first), doubly framed in black, enormous, at the lower right a smaller, fatter, almost square rectangle, pasted to it, projector light that seems to spill over, a white rug, on the floor beneath the two women seated in front of its, a Caucasian 9the dancer Lucinda Childs) and a Negro (Sheryl Sutton, a Wilsonian performer),the latter immobile, hands in lap, the former, within the maintained pose, shifting: contrast of self-contained quietude in concentration to tension imperfectly imposed on nervous agitation. (ft 53: Wilson has maintained them in this contrast, analogous, relative to light, to that of back to white, through the play except for the concluding >knee< (tho' act IV is such as to preclude its being in evidence). Self-contained black is to Wilson not negative. It is his own color.) A sustained organ note, the space-filling sound of a present awareness, accompanies it (in the pit, by pale-green lights, the console awareness of an electric organ is visible).

All that in the very first moment of the work! After 59 pages of that kind of writing, on some of which there is only one line of text, the rest given over to footnotes, one feels utterly exhausted, although perhaps one can conjure up the "vision" at the heart of Wilson's piece. Yet Brecht's conclusion to all his attentive description is a simple thumbs down dismissal of the work: Wilson failed to find images for what was on his mind. The themes he hit on do not relate to the content. He changed his style to divorce the spectacle from its content. Watching it, we see the meaningless alteration of meaningless themes, and perhaps the theme of failure.

Arguably, it may be beneficial to have such a thorough-going historian treat his work with a kind of love-hate relationship. For all of his obvious devotion to the experimental theater on which he writes, Brecht never makes easy assumptions. For example, in Queer Theater, he maintains that as the gay theater got better, as it more artfully organized its childish yet energized low comedy and burlesque into formal artifice, the works became more popular but less interesting, that, in some senses, although they were better structured, the plays "fell apart." After a description of the work of Jack Smith, notes on the earliest productions of the Theatre of the Ridiculous, an analysis of "the gesture of hatred" works of John Vaccaro, and the "gesture of compassion" works of Charles Ludlam, and a brief summary of Ronald Tavel's career, Brecht ends this fascinating work with three pieces on The Hot Peaches, a discussion of Larry Ree's Original Trockadero Gloxinia Ballet Company and Les Ballets Trockadero de Monte Carlo, and a piece on John Waters.

In this volume Brecht has replaced his detailed scenarios with broader, but even more baroque, personal evaluations of the works he has seen: Still in the flush of his first imperfection broadcasting untellable riches, Charles [Ludlam] immediately without hesitation entered his Classic period, putting on Whores of Babylon (by Bill Vehr) and then Turds in Hell (based on an idea of Bill's), grandiose Christian moralities, personal pictures of homosexual misery in the grand format of existential maps. The party-going camouflage of naive fun shed, no longer in a living-out on stage, their opulent disorder, aristocratic crudity, unostentatious shamelessness was the adequate form of a content in ideal beauty, which is why i use the word >classic<>Shower] was an exercise in the pseudo-wit of smutty puns, the author's attempt to elevate the speech of the boroughs into art, an art that would provide a kind of entertainment. This art, though like Oscar Wilde's an art of speech, is literary rather that theatrical in that, a play on language, it focusses the audience on language rather than character, and does not create tension or advance action. The puns hinge on meaning, a not too clever double entendre, but Tavel is stuck on sound, addicted to alliteration.

Accordingly, Brecht sums up Tavel as a writer of "cleverness," focusing on, in place of a ridiculous theatre (a term first coined by Tavel), on what he calls a "disgusting use of language."
In short, although one is seldom given an easy go of it, Brecht takes us through the various stages of experimental New York theater in a way no one previously has been able to accomplish. And what a joyful, if some sometimes carping, trip that is!

One might add that what this artist attempted to do for the theater taking place mostly in lower Manhattan, in his two collections of poetry, Poems of 1975 and 1978 and 8th Avenue Poems, he attempted to capture for that same area's streets. These are not carefully sculpted poems but often raw expressions, not without their own sentimentality, of city life.

a hum in the air envelops the wheeling flocks of pigeons above the gliding cars,
as a newspaper page in the lesser format of the tabloids
with agility slips off the sidewalk.

In a sense, through his very personal encounters, both everyday and cultural, with the American scene, and despite his European upbringing, Brecht was the most American of Americans. In a poem title "Addendum" he writes:

I walk here and I don't have to
and I wasn't meant to, the houses about me always
perfectly clear. No thread ties me to them, eyes only
that see and they sink into me
and the traffic too and the people
and never become mine
and don't touch me.
. . . . . . . . . . . . . . . . . .
Yet I feel perfectly at home here.
So you see I am not even afraid
nor merely discontent,
but simply unnourished, myself not stirring ever
an old man virginal.

This is the truth.

At a performance at Mabou Mines , I introduced myself to Stefan Brecht and his current wife, Rena Gill, who were attending the play. Suffering from the pro-gressive brain disease, Lewy body dementia, Brecht looked frail, his head and arms heavily shaking. Upon hearing of his death last month, I again mused what a great loss to the theatre world that Brecht had not been spared to complete his books.

Posted by Douglas Messerli at 7:50 AM