Douglas Messerli "Sweating It: Three Mid-20th Century Tragi-Comedies" (on Waiting for Godot, West Side Story, and Exit the King) 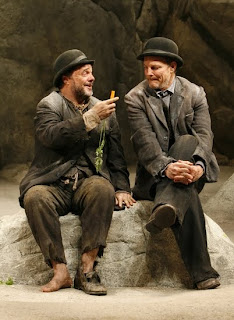 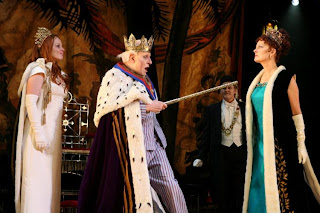 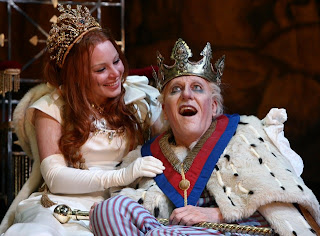 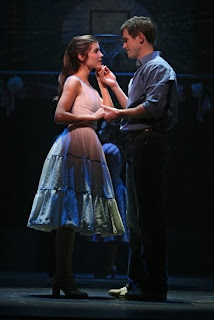 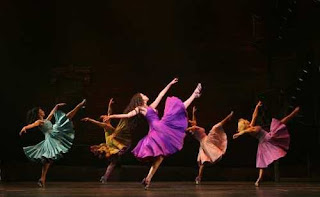 Through accidental intent I saw three plays on my recent trip to New York City, all works from the 1950s through the early 1960s that revealed not only Auden's description of that period as "The Age of Anxiety," but reiterated from me the dramatic tensions at play in 1950s society. All three works might be described by the subtitle of Waiting for Godot (1953), a "tragicomedy," although one does not necessarily think of that phrase in relationship with West Side Story. Yet its appropriateness became clearer than ever upon seeing Arthur Laurent's new production.
The terrified participants of Beckett's landscape—in this production presented as an inhospitable plain surrounded by rocks—have seemingly nowhere else to go, although they incessantly speak of "going." Although Vladimir (stunningly played by Bill Irwin) and Estragon (Nathan Lane) spend each night separately (sleep is probably the most isolated activity that man endures), they gather each morning to discuss, in the absurd language of Laurel and Hardy, their possible alternatives and attempt to entertain themselves until the arrival, promised each day to Didi (Vladimir), of Godot.
Numerous readers and critics of Beckett's work have speculated that Godot is God. He is, after all, seen as the agent of their salvation; at the end of the play, as they discuss possible suicide, the two speak:

Even the child who reports each day that Godot (pronounced in this production as Godot) will not arrive describes his master in the standard Christian manner: a man with a white beard. Yet if this elusive Godot is God, perhaps we would be better without him, or, at least better off not spending our entire lives in wait.
The conditions of their lives—both are tramps who apparently recall a previous life in which they were better off—is abhorrent. Gogo, in particular, is plagued by swelling feet, and is often unable to remove his shoes. Each night, so he tells Didi, he is beaten while he sleeps. So too is the child's brother beaten by Godot.
The appearance of a passing landowner (he claims to own all the land about), Pozzo (grandly performed by John Goodman) and his slave, Lucky (John Glover) demonstrates the scandalous condition of others. Carrying Pozzo's dinner, table, and folding chair, Lucky stumbles about on a chain, whipped from behind by Pozzo. Both Vladimir and Estragon are horrified to discover someone worse off than themselves, but gradually perceive that Pozzo is completely dependent on Lucky; and when Lucky is commanded to dance and to think, we discover he is such a clumsy oaf and academic bore, that he is perhaps more useful to the world in his subjugation than in freedom.
Even more disconcerting is the Alzheimer's-like condition of all Beckett's figures save Didi. When Pozzo meets up with the two on the second day, he is even more dependent on others than previously, but has no memory of meeting the two tramps a day earlier. Estragon must be reminded each day of the previous day's events and is often incredulous of Didi's recountings. Even the child who reporting for Godot cannot recall seeing Didi each day. For Didi it is as if what he perceives is eternally in question, and he spends much of the play trying to uncover evidence that his vision of reality is correct.
But that is just what makes this work a tragedy: there is no reality. And it is also that which makes it comedy, which induces us to laugh: because there is no reality, these beings have nowhere else to go. Their entreaty to "go," "Yes, let's go," results only in stasis. They have no choice but to return day after day to their rocky lives to wait for someone who may beckon, but will probably never come. In Beckett's final stage instruction, They do not move, even the most determinist of us realizes that we are all "frozen" into our own ridiculous lives. Like figures of the commedia dell'arte, we can only pull up our trousers and wait for the inevitable end of existence.
Ionesco's less performed Exit the King (1962) explores just that end. King Berenger's (Tony winner Geoffrey Rush) empire has, over his long rule, shrunken extensively. The sun has frighteningly diminished and a large sinkhole threatens to suck up the entire kingdom. As Queen Marguerite (Susan Sarandon) recognizes: "The party's over," reporting to her husband that by the end of the play he will die.
Terrified by that fact, Berenger fights his approaching death with the tenacity of a spoiled child let loose at a table of doting adults. The palace maid (Andrea Martin)—although complaining of the endless burdens of her job (she is only one of three who continue to serve the court)—servilely straightens his winding robe, picks up the crumpled carpet, cooks, and performs thousands of other chores. The King's younger consort, Queen Marie (Lauren Ambrose) coos her love, insisting that he continue to fight his inevitable death.
Fight he does, but with the attacks coming every few moments, Berenger's absurd pleadings and rush of memories become more and more ridiculous. What may seem to be a topic that would send most audiences fleeing from the theater is here transformed into a long-standing joke (almost overplayed in this production), as the King dies and dies and dies, Marguerite cheering him on as Marie tenderly dotes on his numerous last gasps.
One of the difficulties in this play (as in Beckett's) is to keep those laughs coming while, at the same moment, the audience grows uneasy in its recognition that it, like the characters, simply must wait and die. And although Ionesco could be as wickedly ironic as Beckett at times, Beckett's crisper diction—which at nearly every moment seems to combine the tragic with the comic—allows his play to better function than Ionesco's broader farcical conceits. Still, in all, Exit the King is a brilliant play that tenderly takes the King (and we, his consorts) from living into death.
Both of these plays, accordingly, offer us a world in which its characters are literally forced to face the void, nearly swooning in its heat.

Based as it is on Shakespeare's great tragedy, Romeo and Juliet, West Side Story at first appears to be without the comic redemption of the Beckett and Ionesco plays. Yes, there are comic moments in Laurent's script, the self mockery of the Jet's psychologically frenzied lives expressed in "Gee, Officer Krupke" and the equally playful putdown of the Shark women against a girl who wants to return to Puerto Rico in "America" (note: unlike the great dance scene in the motion picture version of the musical, in which both Shark males and females dance "America," the stage version includes only women). And there are those tender and light moments "Something Coming," "One Hand, One Heart," and "I Feel Pretty"(sung in this production in Spanish). But for most viewers, I suggest, West Side Story would not seem to be properly described as a tragicomedy. Where's the comedy? many might ask.
If we recognize, however, that West Side Story presents us with a society with no adult moral examples (Doc is so passive he is completely ineffectual, the police are as nearly as disgusting in their prejudices against the Puerto Ricans as the Jets), it becomes clear that the given world of this musical is as absurd as that presented in both the Beckett and Ionesco works. Living is being part of a gang, and being part of a gang is to be willing to fight, kill, or be killed. Although both Maria and Tony attempt to live outside that reality, they have no other choice, and are inevitably pulled in through the vortex of love and hate into the absurd world surrounding them.
On the streets of the upper West Side, New York, Tony has no choice but to fight for his own kind, even if it means destroying, in the process, the woman he loves. Only Maria seems intellectually to be able to create a different reality, a reality not based on territorial and familial domains, but on love; despite the fact that Tony has killed her own brother, she insists that her love for Tony takes precedence.
Obviously Tony's inevitable death produces no laughter. But in terms of the play's inverted realities, his death returns that world to normality.
The singing and dancing of this production was excellent, and the leads, Matt Cavenaugh and Josefina Scaglione were far better than Richard Beymer and Natalie Wood. But I still prefer the movie version, simply because its characters are better delineated than the stage production, and Jerome Robin's filmic dances, particularly "America" and "Cool" (which on the stage is performed in the drugstore early in the play), are simply masterpieces which are nearly impossible to match. Although Laurent's new direction brought two of the songs into Spanish, it had no great effect on the timbre of the piece, and the cute dancing chorus members detracted from the anxiety of the world the script expressed.
As the film's Baby John made clear through his tears and the gang's pent up fears released in "Cool" evidenced, the young men and women of Bernstein's West Side New York were also forced to live in a sweat. And unlike the film, where there is at least a hope of change as the gang members come momentarily together to carry off the body of the slain Tony, in the stage version his corpse remains bound to earth, Maria mourning him alone as she declares that she too has now learned "how to hate." As in Exit the King she has now come face to face with death, and as the curtain falls, just as do the characters in Waiting for Godot, she is frozen in space.