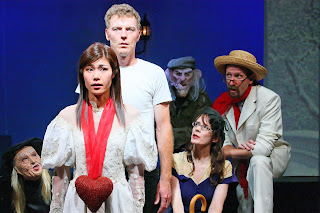 Having originally published Mac Wellman’s play Bad Penny in 1990, I was pleased to have the opportunity of seeing this play performed at the City Garage in nearby Santa Monica in 2008. Directed by Frederíque Michel, this production was what one might describe as an admirable attempt, particularly given the fact that the play was originally performed outdoors on and about Bow Bridge in Central Park with a much larger cast against the natural beauty and mysteriousness of the stream upon which the character of the Boatman of Bow Bridge rowed a real boat, while the City Garage production was limited to their tiny darkened stage and a cast of six, one of which, Mariko Oka, was asked to perform as the entire chorus.
The New York Times praised the virtuosity of the play’s language, and the original production, by director Jim Simpson and produced by the renowned Anne Hamburger, helped to win Wellman an Obie.
Although Michel attempted to recreate some sense of that original space through projections upon the walls of Bow Bridge and Central Park, neither she nor her cast seemed to completely comprehend the dynamic of Wellman’s language. Whereas in the original production, the props were limited to a boat and a tire which Man #1 has brought with him into the park from his car parked somewhere on the East Side of the City, Michel interpolated into the work various objects: stuffed birds, art easels, paint brushes, umbrellas, shoes, cardboard boxes, and other detritus that literalized Wellman’s “story” and deflected from the seemingly manic tales of the various figures who momentarily have gathered at this spot. While the script seems to call up, for me, isolated figures standing each some ways from the other as they vaguely interact to their various tales—the major of which concerns a woman named Kat’s unfortunate act of picking up a penny lying tails up—

I was having a basically okay
day until I picked up that bad penny. Now
now it’s ruined. Now I don’t even know what I’m
saying. Weird. This is really weird.

—the City Garage performance seemingly cornered its characters into a concatenation of strange types.
Indeed, Wellman’s characters are very “weird” in their series of metaphysical postulations and horrific tales of childhood—lived by Kat in a “part of the city considered unfashionable….a fairly disgusting childhood…with a gruesome family” (“Gruesome mom, gruesome pop, gruesome cat, gruesome dog”) and lived by Ray X in Big Ugly, Montana, where he “went to Big Ugly Highschool and played end on the Big Ugly Football team, which was called the Big Ugly Metacomets.” But under Michel’s direction these strange experiences are simply part of a stranger universe where, at several points, rain pours from the sky and, nearby, a Cezanne-like artist stands by his easel expressing his doubts, while a southern cheerleader type pointlessly reprimands Kat and warns Ray against her.
As I later explained to my theater companions Martin Nakell and Rebecca Goodman, Michel seemed more determined to skew Wellman’s work into play akin to the theater of the absurd (the City Garage company has produced several Ionesco plays), and by introducing into the play various dialects, this production distracted us from the fact that although Wellman’s world may be “weird,” it is never truly absurd, never entirely unbelievable. Despite Kat’s often disconnected speculations about what is real opposed to what we perceive and Ray’s furious attacks against both nature and urban life, in the original script these characters maintain a sense of poetic logic. Their imaginative and often ridiculous spins of rhetoric are always firmly grounded in the American experience, and despite their confusion and outrage there is always an underlying sense of nostalgia and hope in their plaints. Even the chorus’s gestural incantation of the incomprehensibility of all the values upon which these characters have pinned their hopes, merely reiterate a world more akin to Thornton Wilder’s Our Town than it is to the enraged human-rhinoceros or the flying father of Ionesco’s universe.
It is, in part, the open spiral of disconnectedness of their tales that helps to make Wellman’s characters, particularly in this play, so grounded in U.S. life.
By collapsing the chorus into one figure—a kind of shaman madwoman—and establishing her characters as regional types, Michel’s version of Bad Penny loses the dark, abstracted lyricism that I hear in the original script. And while Wellman’s original work ends in a frightening prediction of near-apocalyptic results for a country that buries its people in its various real and metaphoric toxic wastes—

For the Way leads over from the
Fountains of Bethesda, where the Lord
performed certain acts, acts unknown to
us, across the Bow Bridge of our human
knowability, pigheadedness, and the
weisenheimer attitude problem of our
undeserving, slimeball cheesiness; and
scuttles into the Ramble, there, of
utterly craved, totally lost, desperate
and drive incomprehensibility—friend
neither to fin, to feather, nor tusk
of bat, bird, weasel, porcupine, nor gnat.
And we who are not who we are must forever
bury the toxic waste of our hidden hates
in the dark, plutonic abysm of our human
hearts, and be always blessed in the empty promise
of the sky that looks down upon us with
a smile, a divine smile, even as she
crushes us all beneath her silver foot

—the City Garage production, by having Man #3 (whom they characterize as an observing artist) repeat Kat’s first lines, gives the play a false sense of closure, wrapping it up into the daily repetition of its characters’ acts:

While Wellman’s original promises us a sort of a terrifying transformation, Michel’s version leaves us in a purgatory of everyday experience, rendering all the cries of despair and hopeful vision of its figures absolutely meaningless.