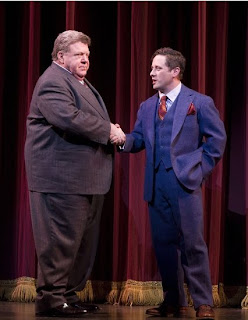 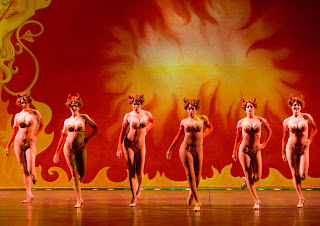 WARM UP
by Douglas Messerli
Bob Martin (book), Charles Strouse (music), and Susan Birkenhead (lyrics) Minsky's [based on the film, Arnold Shulman, Sidney Michael and Norman Lear (writers), William Friedkin (director) The Night They Raided Minsky's (from the book by Rowland Barber)] / Ahmanson Theatre, Los Angeles / The performance I saw was on February 10, 2009

With a score by the noted Broadway composer Charles Strouse (Bye Bye Birdie, Annie, Applause and other musicals), a book by Bob Martin of The Drowsy Chaperone fame, and directed by Michael Ritchie (The Drowsy Chaperone and Curtains) the production of Minsky's, over 10 years in the making, represented the possibility of good old-fashioned musical fare, and, if nothing else, promised a highly enjoyable evening. And in that sense, this Los Angeles production did not disappoint. Certainly it tried hard to please.
The problem is just that. Martin writes out of a nostalgia for Broadway musicals and older forms of theater. And as most of such nostalgia-based assemblages do, he readily posits the old saw that when times get tough (as they were for the Depression era New York lower East Side National Winter Garden Theatre, the home of Minsky's burlesque—and, with a wink and nod, we all know are equally for us today) it's important to return to the old values of theatrical entertainment: God damn it, kids, we're going to put on one hell of a show!
Indeed the leading actors, ensemble, set-designer, costume designer, and light director do just that. Unfortunately for Martin and the musical's producers, today is not 1930, and even then, we are reminded, burlesque, the subject of this love letter to past entertainments, was already near death. Perhaps had Martin simply reproduced some of burlesque scenes and sketches, we might have been titillated—as we were in the original movie—at the very least. But his book has emptied the plot of almost everything that could give heart to his work, replacing it with a shell of sugary sweetness that even the most gushing sentimentalist (I have admitted to crying for joy during many musicals in my life) might have found cloying.
Billy Minsky's theater is having hard times; not only are the audiences for his burlesque performances dwindling, but Randolph Sumner, a self-appointed destroyer of all that defines the joys of life—he warns his daughter Mary not to smile too much—has begun to direct his energies to closing down The National Winter Garden.
A driven man, clearly in love with theater and those performing on the stage they describe as "Home," Billy is nonetheless dissatisfied with life and seeks out the help of a psychiatrist. Meanwhile, the straight-lipped Mary Sumner finds herself in a similar position, and, in one of the best scenes in the musical, meets up with a parallel session (the matching pair of "shrinks" later fall in love), after which—through the machinations of a blind man more out of a Buster Keaton movie that a burlesque sketch—they meet up and immediately fall in love.
Both the lead actors, Christopher Fitzgerald and Katharine Leonard, are superb performers, but it is hard to draw the audience into their characters when they have already been treated as such cardboard types. Yes, of course we know the truth will have to come out, that Billy is not a fellow reformer, but, in fact, is the devil Minsky himself. And the lies he has told Mary will obviously separate them for a while from the natural course of love, but....
That's just the trouble, we know the entire story before it has even begun. The rest of this musical, accordingly, has little to do but to strut its beauties around the stage in numbers like "Cleopatra," "Bananas," "You Got to Get Up When You're Down," "Workin' Hot," and "God Bless the U.S.A." and, in one predictable if excellently performed piece, get "Tap Happy." It is as if the entire musical Gypsy were centered upon the performances of Tessie Tura, Mazeppa, and Electra, the three Minsky strippers of that work. But then, those three were actually strippers and their gutsy performances were far more interesting and downright shabby than the cleaned up dances of this musical as presented in "Keep It Clean." Who'd a thought that Disney's The Lion King could be sexier than a musical about burlesque?
Despite my cynical remarks, however, I must admit that the wonderful Minsky's cast danced their hearts out, flashed winning smiles, and did everything in their not so diminished powers to keep it all going. At moments, true theater poked out its puny head, particularly in the musical's wittiest song, "I Want a Life," sang with deadpan humorlessness by Minsky's nerdy bookkeeper (John Cariani) and the daughter of Minsky's backer, a dour little woman whom he is desperately trying to get off his hands (Saturday Night Live's Rachel Dratch). Together they harmonize about a life where "a button is something to sew on" (an earlier song explained that in burlesque parlance a "button" is what ends an act) and "...where pies are [just] dessert." As they briefly minuet about one another, it almost appears that, despite their preferences for humdrum living, they may break into dance; yet the two stubbornly stand in place: "And where no one will dance."
Yet all of this seemingly endless energy depressed me even more. Like Mary Sumner, early in the work, I just couldn't get a smile onto my face in reaction to their spectacular engagement with life. A kind of gloom had set in.
Because of the vacuous story and characterizations, the dances and songs of Minsky's seemed always to be a warm up that generated no spark. There was, alas, no fire in this work's idolizing heart.