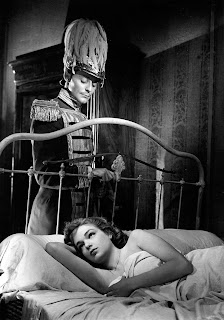 La Ronde, originally titled Der Reigen (a round-dance or roundelay, published as Hands Around in English) was first "handed-around" in a private edition in 1900, Vienna. The play, which follows the sexual affairs of 10 couples, one each appearing in the next scene, was recognized as too outspoken even by its author. Schnitzler was, nonetheless, shocked that when the play was produced in 1903, it caused a major scandal, anti-Semitic riots, and the banning of the play. It was not revived again in that city until 1920.

Translator Nicholas Rudall, disliking the notion of being "handed-around —since it implies the idea of the possible disease of syphilis, an interpretation of that has delimited discussion of the work's themes—takes his nod from Max Ophuls great film rendition of 1950, La Ronde, which retains the concept of the dance while including other "circles" such as the circle of friends that make up the sexual partners of the play. Frankly, one of the weakest aspects of Ophuls' film, for me, is the constant repetition throughout of waltz music, a carousel motif, and even images of the frames of film itself as they weave through the spool of the projector. Personally I prefer the German title, or even that of the original English, with its social connotations of being handed around or even handed-off, if one can forget that it calls up venereal disease.

None of the play's characters, despite the intense denials to the contrary, are innocents. The young prostitute of the first scene readily seeks out sexual contact with the sailor, offering her body up to him for free! The young maid of Scene II, knows very well how to flirt with the soldier while drawing him into the bushes near where they have been dancing. She is equally willing to bed with the young son the house, who may be inexperienced but is quite clearly "ready" for the attack. Although the Young wife of Scene 4, may need a more careful seduction than the maid, the young gentleman has prepared for almost everything, and even though he fails the first time around, he soon comes alive in her caresses.

It is, in fact, in Scenes 4 and 5, that the play truly comes alive, and begins to intimate Schnitzler's true concerns. Part of the method that the young wife uses to arouse her would-be lover is to question him, not only about his own past, but his affairs with other women, his own position in relationship to sex. While this is not completely an innocent series of inquiries, we also feel that she is seeking for some sort of understanding, if not about sexuality in general, at least about her own feelings and her own break with cultural taboos. This becomes more apparent in the next scene, where we come to understand the cause of her frustrations—her business-man husband is much older than she and his sexual relations might be described as a purposeful on-and-off again activity, what he describes as a attempt to keep the honeymoon alive!

He cannot even imagine that she might be unfaithful, and insists that she should dessert any woman acquaintance who might possibly even thought able to do such a thing. Yet she insistently questions him, it is clear, just to comprehend why these situations occur. Has he ever had sex with a married woman? He grumpily admits that he has—before meeting her. But we see in the very next scene that he is still not himself adverse to having extra-marital affairs.
All of these sexual couplings are heterosexual, in part, because Schnitzler intentionally presents relationships in which men and women are quite equal, at least in terms of their hypocrisy. The last two scenes, however, portray a man who has his mind, at least, occupied by something else.

In Scene 9, the handsome Count (beautifully portrayed in Ophuls rendition by Gérard Philipe) visits the actress midday with the permission of the woman's mother. To her suggestion that they immediate sex, he is startled; he's not ready for it, he argues; it's like having a drink in the morning. No, they must wait until after of the theater, after dinner, at the appropriate time and place. Meanwhile, he talks not of love (The Count claims that "there is no such thing as love"), but of his good friend, Louis and other men in his regiment. The actress finally must ask him to remove his sword, and when the seduction scene arrives, it is she who conquers.

In the final scene, the Count awakens in the room of the Prostitute, not even knowing who she is or where he is, and certain, given his drunken condition, that the woman in the bed and he have never had sex. The only thing he remembers is that he was in his carriage with his friend Louis. In a final series of questions he reminds me of the stock-gay-figure: the straight-man who gets drunk to have sex with homosexual men, conveniently forgetting everything come morning.

COUNT: (stops) Listen, tell me something. Doesn't it mean
anything to you anymore?

COUNT: I mean, don't you have any pleasure doing it anymore?

COUNT: Last night...tell me. Didn't I just collapse on the sofa
right away?

WHORE: But you passed right out.

Love, even pleasure is missing from most of these encounters. It's the interchange accomplished through the revolutions of the dance and the attendant dizziness that matters. Schnitzler's consistent "Blackouts" at the moment of sexual contact are the perfect device in that they indicate the unimportance of the act itself.

Early in the play the Maid with her soldier cries out just before the sexual act, "I can't see your face." In a 1982 translation by Sue Barton, the Soldier retorts, "What's my face got to do with it," while Rudall simplifies the Soldier's words into a question: "My face?!"* I am not interested in judging which translation is better here—Judall's translation seems to me to be a muscular, performable version—but the former does remind me of the title of the famed Tina Turner song, "What Does Love to Do with It?" which I couldn't get out my head while reading this work.

The characters of Schnitzler's play talk endlessly of love, but it's the sex they are after, and, in the end, it is their search for it that spins them off a life-long dance. The moment he finishes with the young maid, the soldier returns to the dance hall. The young wife returns to her husband after her dalliance with the young man. The Count surely is reunited with his friend Louis, uncertain whether or not anything happened with the sleepy prostitute, who reminds him of someone he has met long ago, perhaps the actress of the previous scene. In the end, Schnitzler's world is not so much an immoral one as it is a society of dissatisfied beings.

*Marya Mayne's 1917 English-language translation represents the Soldier's line as, "Face, hell!"
Los Angeles, August 12, 2010
_____
Austrian writer Arthur Schnitzler wrote several other plays, including Anatol and Libelei. He is best know, however, for his fictions Lieutenant Gustl and Dream Story, both published by Green Integer.
Posted by Douglas Messerli at 11:04 AM