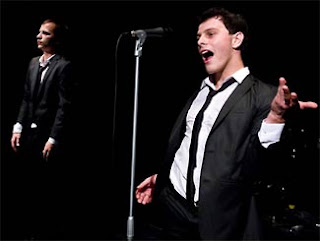 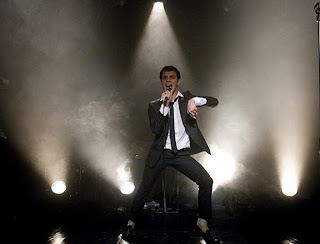 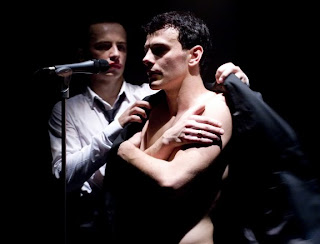 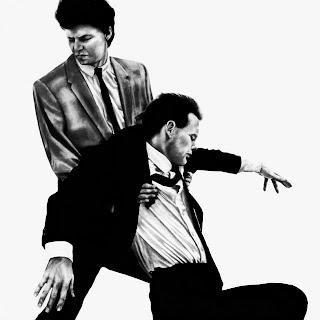 Robert Longo, Men in the Cities, 1979
MEN IN THE STREETS
by Douglas Messerli
Bernard-Marie Koltès (original text), Radosław Rychcik (director) In the Solitude of Cotton Fields / performed by The Stefan Zeromski Theatre, with music by the Natural Born Chillers / performed in Polish, with English subtitles / the performance I saw was on September 24, 2010 at Redcat (Roy and Edna Disney/CalAts Theater in the Walt Disney Concert Hall complex, Los Angeles)

Based on the 1986 play Dans la Solitude des Champs de Coton by French author Bernard-Marie Koltès, who died of AIDS in 1989, In the Solitude of Cotton Fields is an angst-ridden play about gay love and sex. The two performers of this Polish production, Wojciech Niemczyk and Tomasz Nosinski, backed up by the neo-punk techno band, Natural Born Chillers, begin the action with an mesmerizing dance performance. Dressed in retro 1960s black suits, thin ties, and white shirts, the two stunningly gyrate to the music, Niemczyk moving in all-out abandonment, while Nosinski—already suggesting the character we soon encounter—dances in a series of more restrained, nervous twitches that suggest an internalized psychological condition that won't permit him to "let loose." Both men are absolutely beautiful, completely aware of their lithe bodies and their youthful good looks. When they meet on the street after the dance, a gaze between the two sends them into a sexual interchange negotiated with an intense dialogue, as they play out the roles they describe as dealer and client.
Niemczyk, self-assured and insistent that he—a figure that haunts the dark world of the nighttime beasts—is a man who can discern what anyone is seeking, and deliver. While Nosinski, covering any lust he may have with hauteur, claims he is a man of the light, never seeking out the dark; he, so he says, walks "straight," moving with the society as opposed to against it. The insistence of the one that sex is the territory of the hunted and haunted, and the other's apparent fear of involvement is the substance of the poetically-filled dialogues in which they engage, cautiously moving toward each other as they verbally struggle, a psychodrama, in part, about sexual self-acceptance.
Of course, one might immediately (as do I) wonder why a normal sexual encounter of two gays on the street should result in these strange metaphors of Marxist politics, underlined by Sadeian issues of pain and pleasure. Koltès clearly saw sex as a battle between forces and lived with a far greater sense of being an outsider than I, who joyfully encountered dozens of young men in my youth in just the manner these two do.
To be fair, however, it is not just sex that the author and characters explore, but the whole issue of what through sex they are seeking, the desire that Niemczyk claims he can fulfill and Nosinski is so ready to deny. The sensuality of both their positions is what makes this work so fascinating—and frustrating—as Niemczyk waits for the first drool of the mouth before pouncing and Nosinski struggles to bottle his sexual excitement and terror within his body. And what is marvelous despite Koltès' slightly empty and rather abstract thematic is the brilliant performances these two actors give. Unlike the American acting tradition where the body is made to parallel "natural action," the performances here propel mouths, faces, eyes, lips, hips, legs, and feet into constant motion, often revealing in their movements what words cannot express. One of the most explosive moments in the work occurs when, having painted his lips bright red, Niemczyk falls into a wailing scream that serves as a kind of siren song, a plea for love that no one can ignore, a music far more compelling than a written score.
Nosinski's thin frame seems controlled by wires more than nerves and blood vessels. The fear and horror he expresses in his every move explains, in part, his absolute subservience to the more openly sexual being. At the moment when we feel he cannot survive without release, he slowly strips away his coat, shirt, pants, socks, shoes, and underwear to stand passively naked before his dealer.
Redressing, the men stand apart while a video collage of famous and unkown sexual encounters from movies, advertisements, and other sources is shown. I found this, mostly pictures of over-the-top sexuality, the least satisfying moment of the work. But when it ends with both mens' lips smeared in red, the three quick moments of their coming together have been almost electric, a different kind of dance that reminded me, in part, of Robert Longo's homoerotic friezes of his 1981 performance piece, Empire (see My Year 2005); certainly the characters themselves recalled Longo's male figures of Men in the Cities. I don't know how these actors were dressed in Koltès original play, but it would not surprise me if Longo, who himself was influenced by filmmakers such as Fassbinder, had been an source.
As the two men finally consummate their sexual act, it is still unclear whether or not they have fulfilled their desires. But for a least a few moments they have released the tensions between them, turning philosophical positions into softer, human acts, like sleeping in a field of cotton—although given the American history of such fields, that may involve an even more debilitating negotiation.
Los Angeles, September 27, 2010
Copyright (c) 2010 by Douglas Messerli
Posted by Douglas Messerli at 8:00 AM