Douglas Messerli "The Fire Within" (on Eric Overmyer's Dark Rapture) 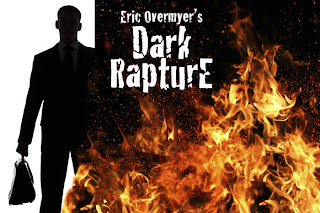 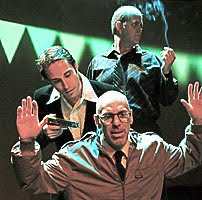 THE FIRE WITHIN
by Douglas Messerli

In conjunction with a celebration and gathering of American playwrights in 1996, Artistic Director Carey Perloff presented Eric Overmyer's noir-drama, Dark Rapture, a play I saw sitting next to Eric. Other noted playwrights, including, if I remember correctly, Mac Wellman, John Steppling, Erik Ehn, Len Jenkin, and Naomi Iizuka were in attendance. The next night I would chair a panel discussion with Mac and Marjorie Perloff on contemporary theater.

Having recently reread Overmyer's play, I realized that it would be quite appropriate in this year's focus on "shadows," and particularly would connect with to the several works I discuss about the dark angers that threaten the US and the world at large.

Indeed Dark Rapture begins in Southern California with a large night time fire not so very different from those arsonist fires I describe in "Getting Along," Two men, Ray Gaines and Babcock, meet up in the night to observe, with some exhilaration, flames lighting the sky. Babcock particularly seems to be enjoying the sight and sounds, the popping of the eucalyptus trees:

BABCOCK: Just sit back 'n watch it comin' toward you. Like sheer
fuckin' inevitabilty. Lurchin' outa the dark rapture.

And both men relate it to their Vietnam war experiences in Cambodia, where they lived for a world of "Catastrope. Chaos." But we soon discover that what the two men are observing includes Ray's house, about to be burned to the ground. And ultimately his strange objectivity, his need to "get some distance" on the scene suggests that something is out of quilter.

In the ACT production much of that drama is stolen from us by having Ray (Richard Synder) begin the work by writing a screenplay concerning the very events which we are observing. And throughout the San Francisco production, as directed by David Petrarca, the events of the play seem often to emanate from the imagination of Ray, an unsuccessful screenwriter, who by play's end finds a deliciously ironic way of dumping his numerous previous attempts at writing a successful script.

Nearly everyone in this play is after some version of "The American Dream," but in the perverse visions of Overmyer's characters that dream is so polluted even before any search begins that there is no hope of joy or satisfaction. Ray's wife, Julia (Deirdre Lovely, a role played in the original off-Broadway production by Marisa Tomei), has fled to Cabo San Lucas with her lover Danny (Mark Feuerstein), a brain-dead Hollywood stuntman, where she drinks all day while enjoying what the soaps might describe as "hot and sticky" sex. Julia's dream is to become a movie producer/sex goddess, and she has illegally procured a "loan," left safely at home in hands of Ray, that she hopes will take her to the top.

But suddenly, Ray has disappeared, perhaps in the fire of the first scene. A body is uncovered in the ashes of his and Julia's home, which, in scene three, we observe Mafia men Vegas (Rod Gnapp) and Lexington (Matt DeCaro) checking out. Has Ray just disappeared, they query, or conveniently "taken a walk," his wife's (actually their) money in hand? So begins a mystery that, in the capable hands of the playwright morphs into a dozen situations, some of them tangential to the main series of stories—such as the murder of Nazim, an American car dealer, by Detroit hitmen Tony and Ron, who kill him simply because his name sounds "Middle Eastern." From Seattle to Cabo San Lucas, from San Francisco and Santa Barbara to Key West and New Orleans, this apocalyptic story tracks its opportunistic characters, each determined to stop or escape from the others.

Some figures, such as Babcock, are so shadowy we can hardly tell on which side they stand; others are more like Shakespearian fools—but all are dangerous in that they contain a huge fire within, an anger that threatens to ignite the entire universe. Their greatest pleasure is to destroy, to consume the world about them.

Having transformed himself into another, a trope that might be applied to several of Dark Rapture's characters, Ray (now Avila) is finally cornered by Vegas and Lexington with his new girlfriend Renee. Having forced the manager to open the vault wherein lay Ray's suitcases—presumably filled with Julia's cash—they drag Julia herself into the room to confront him. A quick thinker, she refuses to recognize him knowing it is the only way to save her own life:

I'm saying I don't know who this man is. I've never seen him
before. My husband is dead. He died in the fire....

When they pop the locks from the suitcases, they discover only "spec scripts," and, after a hilarious whoop of laughter from Julia, they release Ray and Renee. Ray has been reborn, has been allowed a new life. Julia returns to Danny and her dream in Los Angeles, arranging to pay back the mafia "loan." The last scene reveals Ray in St. Vincent Island with an earlier girlfriend, Max, thrilled by being able to chat with the Prime Minister. But real happiness, it is clear, may still elude them. In a world of such counterfeit and lies there is no reality, and, accordingly, no identifiable self left perhaps to enjoy even the ill gotten gains.

Ray and Max slink off into the night, while another survivor, Babcock (better known as José Marti Chibas Valenzuela), shows up in the same café with Renee, who turns out to be his daughter, he the Popi she has long spoken of, the man who claims he killed Kennedy.