Douglas Messerli "The Wasps" (on Harold Pinter's A Slight Ache) 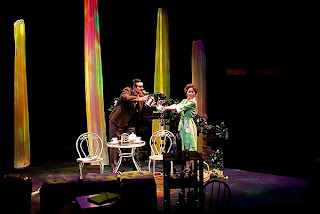 THE WASPS
by Douglas Messerli

Pinter's brilliantly absurd parable of people born to the estate—particularly of their paranoia, boredom, and lost dreams—is played out in a simple and quite humorous narrative: Edward (Emlyn Williams in the first stage production) wakes up with "a slight ache" in his eyes as if he hasn't slept; as he attempts to tell his wife, Flora, (Alison Leggat), of his condition, a wasp becomes trapped in the jam pot, and she becomes terrified of its possible bite. Edward insists that wasps do not bite. They sting.

Yet, a "wasp" does indeed nip away at Edward much as the jury haunts Philocleon in Aristophanes' ancient comedy. Like Philocleon, Edward has been a Justice of the Peace. And much like that monster, we quickly perceive, despite Edward's insistence that he, as always, slept "uninterrputedly," he clearly suffers from irregular sleep, obsessional thinking, and is utterly paranoid.

A nearby matchseller has been watching him, Edward in convinced, keeping a eye on his estate, both his home and himself.

But Edward cannot be convinced. The road on which they live is not at all likely to be traveled by people interested in matches. And why does this matchseller arrive at seven o'clock each morning? Determined to watch him devotedly, it does not take much before Edward is obsessed with the poor man, and, finally, becomes determined to invite him inside to get to "the bottom of things."


The ridiculous one-sided conversations between Edward and the matchseller (who speaks not one word) results in a tale about an acquittal that again points up his relationship to the Greek lawyer; his story is about a man whom Edward describes as a poacher who he comes upon laying, possibly injured, in the road. When Edward dismounts to check the man out, he falls, the pony taking off down the valley, he "up to [his] ears in mud." He continues:

Years later, when I was a Justice of the Peace for the county, I had
him front of the bench. He was there for poaching. That's how I
know he was a poacher. The evidence though was sparse, inadmissible,
I acquitted him, letting him off with a caution. He'd grown a red beard,
I remember. Yes. A bit of a stinker.

Before long, of course, he is cursing the dirty, smelly, old man before him, accusing him of sins he himself is guilty. What he reveals about himself is a life of accumulation and dispassion, speaking like a true paranoid, of "lists of people anxious to do me down." But most of all, he reveals the pointlessness of his own life. And even as he speaks, the old man begins to transform, finally growing young again. Is he the young Edward before his has become the monster he is now?

Before Edward's aching eyes, the matchseller, whom he has attempted to convict (this time in a "home court), has turned the tables, so to speak, and—symbolically at least—has been acquitted of his supposed crimes, as Flora, who has named the matchseller Barnabas—evoking the disciple who, along with Paul, oversaw the church at Antioch and later, at the Council of Jerusalem, helped to permit Gentiles into the Christian Church—comes to take him into her garden, her polished house. As she takes him by the hand, she passes over his tray of matches to a speechless Edward, who might well, like Philoclean proclaim:

And so I have charged my conscience with the acquittal of an accused being! What will become of me? Sacred gods! forgive me. I did it despite myself; it is not in my character.