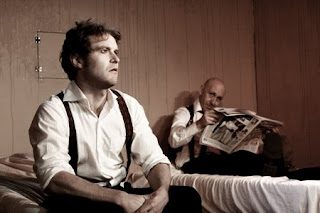 The "dumb waiter" of Pinter's play of the same name is, of course, Gus, who with his partner Ben murders unknown individuals they are assigned. Each time they meet in a room and wait for the arrival of the victim, accomplish the dark deed, and leave. This time around they are holed up in a small room that appears it may once have been a kitchen for a restaurant or bar above, a presumption they must accept since there is a dumb waiter and a speaking-tube between the floors.
Gus is dumb not only in his inability to fully express himself but in his choice of career—although unlike his partner, Ben, he seems to have some sort of sense of guilt, at least, for their last job, the murder of a girl:

GUS: I was just thinking about that girl, that's all.

GUS sits on the bed.

She wasn't much to look at, but still. It was a mess though, wasn't
it? What a mess. Honest, I can't remember a mess like that one.
They don't seem to hold together like men, women. A looser
texture, like. Didn't she spread, eh? She didn't half spread. Kaw! But
I've been meaning to ask you.

BEN sits up and clenches his eyes.

Who clears up after we've gone?

It is perhaps these second thoughts, emanating from the horrible memory of the body obviously torn asunder by their gunshots, that threatens the end of his service. For what character and audience simultaneously discover in the final moments is that he is the victim this time around; as he goes out for a drink of water, he returns to find himself facing Ben with gun in hand.
Yet the dumb waiter is also an object with which the two men become hilariously involved when they began receiving orders for various dishes, including Macaroni Pastitsio and Ormitha Macarounada. The stove has no gas, and the men have little in the way of sustenance, except for Gus' biscuits, a bar of chocolate, a half pint of milk, and one Eccles cake, stale. Yet, despite his own hunger he gives up these precious objects as replacements for the foods they cannot provide. In short, in remains in service not only to his dreadful job of murdering unknown beings, but attempts to obey any demand they make of him. He is a born lackey, a man who was determined from birth to act out the demands of those in control, whether they be of some nefarious upper class or of the criminal underground. It hardly matters for Gus. And given the absurdity of the demands for the various dishes ordered up, he might as well have been murdered for his inability to live up to the demands.
At least he questions, wonders if those in charge are not toying with them, giving them matches, for example, when they know there is nothing to light. Ben, although more literate—he reads the newspaper over and over, commenting on the ordinary events it describes as if they were more horrendous than the murders he commits—but he does not ever challenge the authority of what he describes as the "organisation." For him it is a large system with "departments for everything."
Ben, in fact, although smarter than Gus, may be a sort of dumber waiter, about which the men's final staredown at the end of the play hints. This time he must kill Gus; but next time might it not be himself who is called upon to unknowingly pass through the doorway?