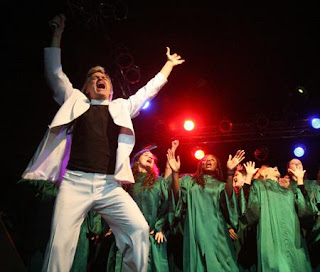 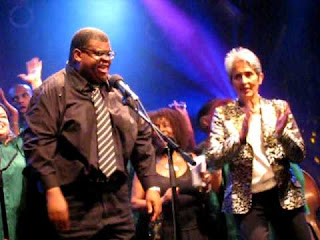 TIGERS GOT TO HUNT
by Douglas Messerli

There I was, dressed down and all hyped up, credit cards in pocket in preparation for the invocation that we rid ourselves of some, impatiently awaiting the start of the revival—in two performances back to back—of the Rev. Billy and his rabble-rousing "life after shopping" gospel choir. "Changealujah!" was surely in the air.
I'd read of this performance artist's transformation from Bill Talen over the last years into a monologue-ing, prayer-invoking, anti-capitalist-preaching, left-leaning version of Billy Graham-Jimmy Swaggart-and Ted Haggard all rolled into one Brechtian being. May the theater-walls of ritual realism come tumbling down upon our ears, I secretly prayed.
The chorus of eighteen marched forward robbed all in—what other color could it be?—green, singing up a storm about American consumption: "forgivealujah." How terrible, they proclaimed, "the supermarket is now our neighborhood!" "Monopoly is not democracy," etc. etc. "This town ain't no supermarket!" they announced.
Rev. Billy strutted behind, gradually getting into the feel of things before he could come before us with the testimonial that, despite his previous messages, he had accepted the money from his recent award of the Herb Alpert Foundation connected to CalArts, as well as their invitation to perform in the Disney Hall. The Reverend had come down very hard in past sermons on Mickey and Minnie Mouse. Hypocrisy some might call it, but hardly something new when it comes to spiritual zealots of either the left or right.
The chorus rolled out another sprightly tune: "Push back—stop that Starbucks," or something to that effect—and another and another yet. The chorus gave each song a lot of energy, despite the fact that I could not always hear the lyrics, although I sat in the fourth row.
It was time for Rev. Billy's sermon. But tonight he seemed, well, I must admit, quite muted, quietly ruminating on his recent experiences with the people of the Appalachian Mountains where he and they had been working with environmental activists to stop coal mining. You know, he confided, as if this might be the very first time we had heard it, this "rip up and extract mentality," along with the destruction and sludge it reaps, brings "cancer to the promised land."
The earth is inarticulate, he explained. People must speak. And he spoke quite beautifully about the power of these poor Appalachian people, bound together by mountain after mountain for several generations. It was a very sweet sermon, if not so very original. Although different in tenor, he was similar to the tone of all the ministers I had heard in my youth. Which is why I stopped going to church.
There was a lot of "good feeling" in the room, as if we had found a congregation of one mind, and joined together just for this night only to celebrate the changes he and we together sought. Like most such ministers, he encouraged us to reach out and touch our neighbors: the couple who sat nearest me were from Torrence, having joined the congregation because her brother was in the chorus. I don't know, accordingly, whether they shared the same sensibility as most of the audience clearly did. For a few minutes even I forgot about the Tea Partyers, having left them behind in this temporary Left-leaning heaven. Thankalujah!
"Tigers got to hunt," sang the chorus. "Tigers got to eat. Birds got to fly. Humans try to understand."
I was confused. Were the tigers good in their necessities or simply dangerous? Or both? Perhaps that's what we humans couldn't understand. As Reverend Billy argued: "Nobody knows what to do."
That's certainly true. But when you go to theater you expect the performers at least to suggest a temporary answer or to more profoundly question you about things than he and his chorus had. This was, clearly, less a revival, a renewal of faith or belief, than it was a repetition of what I think we all had known for some time, a kind of celebration of our good aspirations. Entertaining enough surely, but something that left me, like the tigers, hungry for more.
Ex-porn star Annie Sprinkle and her "wife" Dr. Beth Stephens, sitting in the audience (Rev. Billy would officiate their "marrying the moon" a day later), were brought onto stage, where the chorus sang out in support of gay marriage as "A way to say I do."
As Mae West might have queried, "And what did you do?"