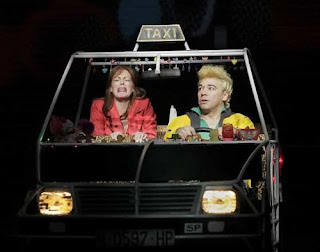 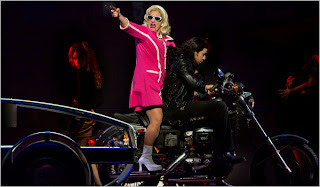 NO ONE'S HOME
by Douglas Messerli

Jeffrey Lane (book), David Yazbek (music and lyrics), based on the film by Pedro Almodóvar Women on the Verge of a Nervous Breakdown / New York, Belasco Theatre, the performance I saw was on November 12, 2010

Women on the Verge of a Nervous Breakdown, shouted Ben Brantley's review in The New York Times "needs—immediately and intravenously"—Ritalin. The musical "is...a sad casualty of its own wandering mind." Los Angeles Times reviewer Charles McNaulty ageed: "all the frenetic activity — with Sven Ortel’s projections lending Michael Yeargan’s fast-moving sets the hyperactive feeling of a fashion video — can’t conceal the gaping flaws of the show any more than decorative icing can improve a cake made without enough baking soda or eggs." "By midway through the second act," observed the Chicago Tribune, "the audience can no longer track the multicharacter action through chaos suited only for film, and palpably checks out of the entire proceedings."

Anyone who has become acquainted with my theater writing will know that I have not always been kind to Broadway shows. But by the time I saw this original musical, directed by the admirable Bartlett Scher, I could only wonder what all this critical hostility had been about. Perhaps Scher had trimmed away some of his actors' frenetic motions in the week since its opening, or perhaps these critics had simply gone to another play, for both I and the audience in which I sat thoroughly enjoyed the musical—a far better work, it seems to me, than most other musicals, originals and revivals, currently on Broadway.

I presume these critics had all seen Almodóar's film on which the musical was based. McNaulty even attempts to compare the two. Yet it seems strange that having witnessed the campy hysteria of the film, that they might not have expected a fast-moving theater event. Indeed, the whole metaphor of both film and the musical is that everyone, having lost or about to lose their sense of position or place (symbolized by love and home), is dropped into a whirling world of accidentally interrelated events. Everyone is on the move: Pepa (Sherie Rene Scott), deserted by her lover Ivan (Brian Stokes Mitchell), wants to rent her penthouse and run off—unless she can convince Ivan to return—going so far as to burn her bed; her sexually active friend, Candela (stunningly performed by Laura Benanti), has fallen in love with terrorist and is desperate for advice and fearful of being arrested; Ivan's ex wife, Lucia (Patti LuPone), having just returned from a mental institution, is intent on tracking down Pepa and Ivan for revenge; her and Ivan's son Carlos, eager to leave his mother's insane household, is intent on finding some new place where he and his fiancée might discover themselves. Add a passing Telephone Repairman and the gossipy/prayerful concierges of Ivan and Pepa and you are certain to create a farcical entanglement of people on the run.

Only the taxi cab-singing Danny Burstein seems to truly comprehend the world in which he exists; prowling the streets to provide services to Pepa and others, he has stocked his cab with medicine, food, magazines, newspapers and anything else his customers on the move may need. This is clearly a world where no one's home; and the idea that constant motion should be reflected on the stage is exceptional. Few other musicals that I can recall—Mahogony and Sweeney Todd being obvious exceptions—have so thoroughly taken to the streets.

The only stop to all this action is, predictably, a Gilbert and Sullivan like magic elixir, in this case Pepa's Valium-laced gazpacho. And it is in the arms of the sleep it provides that Carlos and Marisa, Candela and the Telephone Repairman, and the Chief Inspector and his Detective can discover the joys of love and regain a sense of stability and peace.

The two strong women at the center of this work, Pepa and Lucia, must come to terms with their violent passions by themselves, realizing, in the case of Lucia, that her husband had been "invisible" all along, and perceiving, in Pepa's case, that she is suffering from an "overdose of love." Lucia's song, performed in Patti LuPone perfection, is perhaps the most touching of the entire production.

And that is the real problem with Women on the Verge of a Nervous Breakdown. The singers, the acting, even the sets and costumes, the projections on the wall which some critics found so distracting, are all quite excellent in capturing the sense of this fast-moving, love-forlorn 1980s Madrid. Although David Yazbek's lyrics and music at moments ("Lie to Me," "The Microphone" and "Invisible") rise to the occasion, overall they are simply not fetching and powerful enough to glue this musical into a coherent whole. And without these two central elements of musical theater, no production can long survive.

For all that, however, I think Women on the Verge of a Nervous Breakdown is an admirable failure, a larger-than-life statement of a culture that has lost its center and identity—clearly a subject that should have great significance for US citizens today.