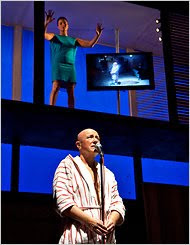 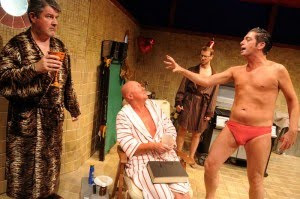 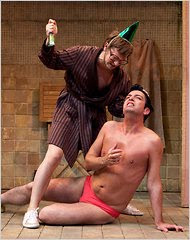 At the bottom of Penelope's swimming pool four men gather each morning to await the appearance of Penelope, whereupon they take turns trying to woo her into marriage. Odysseus has been away for years and these four, now middle-aged and elderly, are the leftovers of what was once hundreds of suitors, all seeking the wealth and protection marriage with her might bring.
None of them, we quickly realize, is suitable for the beautiful Penelope, who watches from her window without saying a word. The most elderly and learnéd man of the group, Fritz (brilliantly performed by Niall Buggy) is a bald and wizened oracle, spending most of his day reading Homer's tales of the missing king. His bid for Penelope's hand is based mostly on his recognized inability to believe in or do anything. Like a Beckett character, he pleads, at the edge of nothingness, for the transformation into a possibility of life, for a new start. Like Beckett's characters his plea is nearly meaningless, but his words, carefully chosen and lovingly performed, seem to move the implacable queen's heart.
The portly Dunne (Denis Conway) is perhaps a more gifted speaker, a wittier entertainer, but his speech to Penelope turns quickly into a series of scatological metaphors, his and her body becoming the center of his perceived universe. It is clear that he has eaten himself into excess, and that excess has spilled over into his thinking, infuriating the others—and, at times, even himself. Dunne, the son of a even more overweight woman, he tells us, was loved only when he put jam behind his ears. He is, in short, more desperate to be loved than he himself is a loving being.
The worst of these survivors, the Alpha male Quinn (Karl Shiels), dresses only in speedos as he poses in muscle builder's stance before attempting to light the barbecue, dropped one day into the pool from above. Yet the machine won't light, and he is forced to cook his dinner with a propane blowlamp. His own body is flabby rather than firm. In this empty world people and things have broken down, disintegrated.
On the day we witness, one out of hundreds for these stolid men, Quinn has had a dream that Odysseus will return, killing each of them, beginning with Fritz. When the other three admit that they have had the same dream, it is apparent that the event will occur. And he suggests, to possibly save themselves, that they each support one another in their performances before the queen. Quinn, the most abusive of the speakers, is the last to perform, and we await that speech with great anticipation. Yet when it becomes his turn, we witness only a series of outrageous tableaux, performed with the help of the abused Burns (Tadig Murphy)—who Quinn treats throughout, much like Lucky in Waiting for Godot, as a tortured manservant—dressing, alternately, as Gone with the Wind's Rhett Butler and Scarlet O'Hara, as Napoleon and Josephine, Romeo and Juliet, and Jack and Jackie, transforming himself in magic-whisks-of hand as if he were acting in Charles Ludlam's The Mystery of Irma Vep. The result is everything but sexually enticing or romantic.
The much put-upon Burns helps with these quick changes, but you can see his hate building up against the three men, particularly Quinn, in the previous scenes. For despite his stupid obedience of these dunces, Burns has secretly begun to think, gradually recognizing their brutality, most importantly the psychological terrorism of Quinn, who has caused the death of Murray, Burns' best friend. From his growing resentment of that event, it is clear that despite all the hateful competition these men have enacted and endured, love has nonetheless survived. And it is that recognition of "love," however puny it may be, that convinces Fritz, Dunne, and Burns that Quinn must be destroyed, that were he to win Penelope's hand, love might be wiped away from their society.
In a sense, all of these men are already dead, not simply because they will be killed by the returning hero, but because they have destroyed themselves, have turned the world to stone through their language of wit, lies, mockery—hate. Basically repeating his role of Sean in Walsh's The Walworth Farce, Murphy's character stabs Quinn to death, freeing their world from the cut-throat menace of eternal battle.
For Burns there is suddenly the possibility to return to "the real world" of men and women rising each morning listening to the simple sounds of nature, who tell stories they have heard instead of cunningly creating a wall of meaningless words. Yet his long ending speech, also made up of words, is so powerfully human that it moves Penelope to momentarily descend into this symbolic hell. But at that same moment, we know Odysseus has returned to port, the barbecue furiously flaming up in the symbolic renewal of love and desire.
Walsh's play is perhaps too preachy and strained to be great, but it is certainly a work worth witnessing, if only for the intelligent cast I saw perform it.