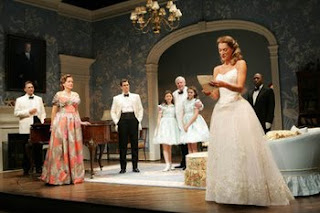 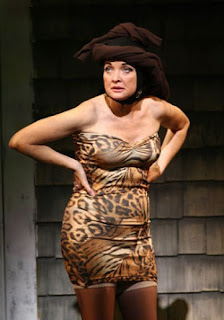 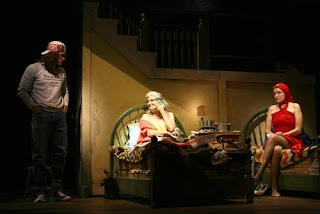 WINTER IN A SUMMER TOWN
by Douglas Messerli

The year is 1941, and the young Edie Bouvier Beale is in a state of great excitement as she prepares for the arrival at the family home in East Hampton, Long Island of her fiancé Joseph Patrick Kennedy’s parents and the return from Manhattan of her own father, Wall Street attorney Phelan Beale. The family’s beautiful 28-room mansion, Grey Gardens, is lit up and decked out for the evening’s celebration, during which their engagement will be announced. As she and her two smaller cousins, Jackie and Lee Bouvier, scurry about the lawns and house, Edie’s imperious mother Edith prepares, with her composer-accompanist George “Gould” Strong, for an “impromptu” performance of a recital of songs beloved by her local audiences.
Strolling the mansion lawns, Edie and Joe discover that they have some very different ideas about marriage: she plans a life in theater, while he envisions her as a complacent wife in his political career, including, perhaps, the presidency of the United States. They are hopeful, however, that their love will overcome their differences. Although Edie is somewhat miffed by her mother’s planned performance—it is she who should, after all, be the center of attention—she lovingly compromises with mama, who will sing only eight numbers instead of nine. But in the charmed world they inhabit, neither Edie nor Joe can possibly imagine the truly horrifying future they face.

The handsome Harvard graduate would be killed only three years later as his plane—loaded with more than 21,000 pounds of Torpex (torpedo explosive) destined for the German V-3 cannon located near Mimoyecques, France—detonated before he and his crewmate could parachute out. By the end of that special afternoon in 1941, the girl’s mother Edith, after having discovered that her husband had flown to Mexico for a quickie divorce and that her dear friend and pianist Gould was planning to return to New York and his gay life, succeeded—as she had with all of Edie’s suitors (John Paul Getty and the Rockefellers in particular)—in scuttling the relationship between her daughter and beau by communicating to Joe how Edie had earned the nickname “Beautiful Body Beale.” By the end of the afternoon, Kennedy has reconsidered his proposal and scurried off to catch his parents at the train station, leaving Edie in the lurch.
So begins the musical version of Grey Gardens, the first act of which is based on facts that preceded the terrifying portrait of the two women, living together as recluses years later in that now derelict mansion, caught on tape by the Maysles brothers in 1973.

Film commentator Robert Osborne has described the experience of the documentary like “watching two trains colliding head on,” but I would argue that it’s even more terrifying and compelling. The painful daily encounters between the Edies big and little, filmed over six weeks, is a study in human decay—the despair of old age, frail health, lost beauty, and the failure of dreams and ideals, embarrassingly expressed and played out in self-degrading “performances” by the two women for voyeurs, camera and audience, a world gone literally “to the dogs”—or perhaps one should say, “to the cats”—that haunts the mind long after the close of the shutter.
Yet despite the distaste it leaves, one cannot help but recognize in both women a kind crazed tenacity for living that transcends all else. The condemned house, infested with raccoons and fleas, smelling of defecating animals and rotting wood, is somehow a perfect dramatic backdrop for the elder’s dreadful renditions of her favorite songs and the younger’s absurdly outlandish costumes. In Edith’s duets with ancient records, we can almost hear the lovely songs of her youth (performed so stunningly in the musical version in act one by Christina Ebersole), and in the mix and match wardrobe of little Edie (performed in the second act by Ebersole as well) we glimpse a secret connoisseur of style.* If they squabble—as Edith herself describes it—“like fish wives,” the two also keep one another alive through their challenges and goads. And despite the horror of their obvious interdependency, we recognize they share a deep love.

The musical version, which I witnessed in December 2006, soon after its premiere, white-washes the grotesquery of the original by turning the crumbling mansion into an Adams family-like habitat, while abandoning most of the brittle dialogue that makes the two so fascinating in the documentary version. Yet there are moments when, through music and lyrics, the Broadway rendition nearly matches the dark and crazed faith in life and love to which both women aspire. Particularly in the songs—splendidly performed—“The Revolutionary Costume of Today,” and “Around the World,” Ebersole’s little Edie comes alive, most dramatically in the former song’s repeated nonsense phrase—the evocative “Da-da-da-da-dum”—sung like a naughty school-girl’s hum. Mary Louise Wilson, as the elder Mrs. Beale, gets the opportunity to transform her bed-bound character into a woman still alive with sexual energy and maternal instincts in the Sondheim-inspired ballad “Jerry Likes My Corn,” a ridiculously simple yet loving paen to the young boy who stops by on his way home from school each afternoon to help them out.

Jerry likes the way I do my corn.
Isn’t he a treasure?
….
Look how he chows right through my corn.
It’s my only pleasure.
I boil it on the hot plate
Till all the juice is gone.
….
He knows which side
My corn is buttered on.

However, it is the recognition that the daughter is doomed by the relationship—granted only a short respite from her mother while Little Edie lived in the Barbizon Hotel in New York (1947-1952)— that elicits our sympathy. Her sad admission of living in the wrong place at the wrong time, “Another Winter in a Summer Town,” is less centered on Grey Gardens in East Hampton than it is on a metaphorical death descending upon a once passionate, beautiful and witty woman—now bald, fat and aging—condemned to live out her days in abjection, while watching her cousins, Jackie Kennedy and Lee Radziwill, move in worlds she once imagined for herself. As Ebersole sings it—

The pink paper lanterns
Still twinkle in place.
My young navy hero,
His tender embrace.
That sapphire blue ocean…
Oh, how can I face
Another winter in a summer town?
Oh God…
Oh God…
My God…

—the piece is less a lament than an orison to put the world of her past to rest, an unanswered prayer to bury the American dream.

_____
*Along with the new edition of the documentary, Todd Oldham is interviewed, wherein he says that many designers have imitated Little Edie’s style, and that she had a wonderful sense of color and proportion.
Posted by Douglas Messerli at 8:04 AM