Claudio Magris TO HAVE BEEN 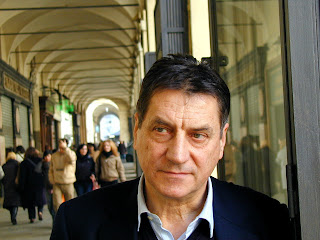 TO HAVE BEEN
by Claudio Magris
trans. from the Italian by Paul Vangelisti

And so Jerry is dead, never mind, that isn't the problem, neither for him nor anyone else, not even for me who loved him and still love him, because love doesn't conjugate—my God, in that sense, of course, what's next, though love has its grammar and doesn't know tenses only verbal moods, in fact, just one, the present infinitive, when you love it's forever and the rest doesn't matter. Any love, any kind of love. It's not true that you get over it, nothing goes away, and this is often the particular rub, but you carry it along with you, like life, and even that is not really such great luck, except that you get over love even less than life. It's there, like starlight, who gives a damn if they are alive or dead, they shine and that's that, and though in the daytime you can't see them but you know they are there.

So we won't hear that guitar anymore, and that's fine too, you can learn to get along without anything. God, how he could play. And when his hand didn't work anymore, he pulled down the blinds and kissed it all goodbye. To that, I've no objection. Sooner or later it happens, and it doesn't matter much how, anyway it has to happen, and who knows how many of us here this evening, ladies and gentlemen, will be alive in a month's time, certainly not everybody, it's statistically impossible. Someone who is pushing his neighbor or complaining because the person in front of him is blocking his view of the stage has already gone to the barber for the last time, but never mind, a year more or less doesn't make much difference, I don't feel bad for those who kick the bucket and I don't envy those who keep on going, nor do I care much to know what group I fall into.

Amen for Jerry, and for everybody and everything. As I said, I can't find fault with his decision, when someone wants to get off the bus, it's right to get off, and if he prefers to jump off while it's still moving, before the stop, that's his business. Someone can be fed up, tired, unable to take it anymore, what do I know. When seeing him down like that because he couldn't play as before, to cheer him up I told him that he had been one of the greats of the guitar, and he said that for him it wasn't enough to have been. He wanted to be—it didn't matter what, a musician, a lover, anything, but to be.

Yes, ladies and gentlemen, in that moment I understood what great luck it is to be born like me, or to have an uncle or grandfather or whomever, born in Bratislava or Lwòw or Kaloea or in any other dump in this shabby Central Europe, which is a hell, a real cesspool. It's enough to smell that musty odor, that stink which is the same from Vienna to Czernowitz, but at least it doesn't force you to be, on the contrary. Yes, if Jerry had understood, when his hand didn't work anymore, his great luck in having been, the freedom, the vacation, the great privilege of not having to be anymore, of not having to play anymore, his free pass from the barracks of life!

But maybe he couldn't, since he wasn't born or raised in that stagnant Pannonian air, thick as a blanket, in that smoke-filled tavern where you eat badly and drink even worse, but are happy to be there when it's raining outside and the wind is howling—and outside, in life, it's always raining and the wind cuts through you. Yes, any grocer in Nitra or Varazdin could teach all of Fifth Avenue—except for those maybe who come from Nitra or Varazdin or some other place in those parts—the happiness of having been.

Oh, the modesty, the lightness of having been, that uncertain and accommodating space where everything is as light as a feather, against the presumption, the weight, the squalor, the freight of being! Please, I'm not talking about any kind of past and even less about nostalgia, which is stupid and hurtful, as the world itself says, nostalgia, the pain of returning. The past is horrific, we are barbaric and evil, but our grandparents and great-grandparents were even fiercer savages. I certainly wouldn't want to be, to live in their time. No, I'm saying that I would want to have always already been, exempt from the military service of existing. A slight disability is sometimes a way out, protecting you from the obligation of joining in and losing your skin.

Being hurts, it doesn't let up. Do this, do that, work, struggle, win, fall in love, be happy, you must be happy, living is this duty to be happy, if you're not how shameful. So, you do all you can to obey, to be as good and clever and happy as you ought, but how can you, things just fall on top of you, love smacks you on the head like a chunk of masonry off a roof, a wicked punch or worse. You walk hugging the walls to avoid those crazy cars, but the walls are crumbling, sharp rock and glass slicing your skin and making you bleed, you are in bed with someone and for an instant you understand what real life could and should be and it is an unbearable pang—picking your clothes off the floor, getting dressed, getting out and away. Luckily there's a bar nearby, how good a coffee or a beer tastes.

Yes, drinking a beer, for instance, is a way of having been. You're there, sitting down, you look at the foam evaporating, a little bubble every second, a heartbeat, one beat less, rest and the promise of rest for your tired heart; everything is behind you. I remember that my grandmother, when we went to visit her in Szabadka, would cover the sharp corners of the furniture with cloths and put away the iron table, so that we children wouldn't get hurt when we ran into something racing around the house, and she would even cover the electric plugs. To have been is this, living in this space where there are no sharp corners; you don't scrape your knee, you can't turn on the lamp that hurts your eyes, all is quiet, time out, no ambush.

So, ladies and gentlemen, this is the heritage that Central Europe has left us. A safe-deposit box, empty but with a lock on it to keep out bank robbers who might want to put who knows what inside it. Empty, nothing that grabs your heart and bites into your soul, life is there, already been, secure, safe from any accident, an out-of-circulation bank note for a hundred old crowns that you hang on the wall, under glass, with no fear of inflation. Even in a novel, the best part, at least for the writer, is the epilogue. Everything has already happened, been written, worked out; the characters live happily ever after or are dead, it's all the same, in any case nothing more can happen. The writer holds the epilogue in his hands, rereads it, maybe he changes a comma, but he runs no risk.

Every epilogue is happy, because it's an epilogue. You go out on the balcony, a breeze comes through the geraniums and the violets of thought, a drop of rain slides down your face; if it rains harder you like to listen to the drumming of the fat drops on the awning. When it stops you go take a little stroll, you exchange a few words with the neighbor you meet on the stairs; neither for him nor you does it matter what s said, it s just a pleasure to hesitate there a moment and from the window on the landing you can see way down there in the distance a strip of sea that the sun, now out from behind the clouds, lights up like a knife blade. Next week we're going to Florence, your neighbor says. O yes, its nice, I've been there. And in this way you save yourself the fuss of traveling, the lines, the heat, the crowds, looking for a restaurant. A stroll in the evening air fresh with rain, then back home. You must not wear yourself out, otherwise you'll get too excited and sleep won't come. Insomnia, ladies and gentlemen, believe me, is a terrible thing. It crushes you, suffocates you, follows at your heels, chases you, poisons you—yes, insomnia is the supreme form of being—insomnia, that's why you have to sleep, sleeping is the only antechamber of the true having already been, but meanwhile it's already something, a sigh of relief...


Born in Trieste in 1939, Claudio Magris is a major Italian scholar, translator, and writer. His first book, Il mito absurgico nella letteratura austriaca maderna of 1963, focused on the Habsburg myth of Austrian literature, reintroducing many works of Central European culture to Italy. His journalist writings have been collected in Dietro le parole (Behind Words) and Itaca e oltre (Ithaca and Beyond). His first novel, Inferences on a Sabre was published in 1984. A second book, Danubio (Danube: A Sentimental Journey from the Source to the Black Sea) was published in 1986. Microcosmi appeared in 1998.
Magris's plays Stadelmann (1988) and Le Voci (1999), along with the monologue printed above, established him also as a significant Italian playwright. They are collected in Voices by Green Integer.
Posted by Douglas Messerli at 8:04 AM