Douglas Messerli "Crashing Through the Ceiling of Despair" 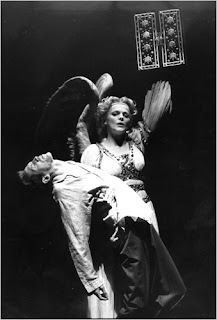 CRASHING THROUGH THE CEILING OF DESPAIR
by Douglas Messerli

Despite all the attendant hoopla and acclaim, Angels in America: Millennium Approaches is truly a great American play. Ranging from the Plague of the Middle Ages through American history (from Ethel Rosenberg and the McCarthy hearings to the Regan days) and into the subconscious of American belief (the play begins with a Rabbi, focuses upon a Mormon couple, and ends with a Catholic angel), the play pushes out beyond the traditional Broadway fare, and explores some rather terrifying aspects of the American psyche.
With comic horror, Ron Leibman portrays Roy Cohn as a mad Faustian force underlying American politics. Power is the only definition of the human species in Cohn’s lonely world at the top; abusing those around him and himself, Cohn denies not only his own sexuality, but sex as anything but another form of power, a sadomasochistic act in which one is either consumer or consumed. But Cohn’s world is a deflationary one; dying of AIDS he refuses to face the implications that he has become one of the consumed, eaten up by his equally predatory cronies and closet homosexuality.
Despite Cohn’s own definition of centrality, Kushner places Cohn at the edge of his play, balanced by a Mormon couple desperate to live out their religious convictions. Harper Pitt, as deluded as Cohn, lives in a pill-popping reality of hallucinatory eco-systems, fortunetelling drag-queens, and Eskimo lovers. Her lawyer husband Joe has attempted to scrub his existence clean of all usual feelings to deny his latent homosexuality; but as Cohn attempts to manipulate him into a father-son-holy savior relationship, Joe’s sexuality becomes apparent, creating a barrier around him and everything he supposedly respects and admires. Trapped on the outside of his own life, Joe rushes into the arms of Louis Ironson, a man who has also been unable to live according to his convictions.
Louis and his dying lover Prior are at dead-center of Kushner’s gay anatomy. In one of the very first scenes of this 3 1/2 hour play, Prior announces to Louis that he has AIDS, and for a while it appears that Louis, a true American idealist, will succor him and help him to face his death. But Louis, like most idealists, is more in love with language than the pain and sour smells of the human body from which it emanates. He bolts, taking with him, so it would seem, all hope of salvation. We are left at the end of act two with three versions of hell.
But Kushner refuses to allow us the sentimentality of failure; and despite occasional lapses into Boys in the Band-like dialogue and Neil Simon situations, the author undercuts any simple condemnations. No, there is something better than the condition of these poor humans; there is the vision of a Christ, so Kushner seems to argue; there is forgiveness. There is always that angel about to crash through the ceiling of one’s despair.
Religion, forgiveness, angels in a world of corrupt politics and AIDS: these are rare concepts in our either bigoted or correct-thinking dichotomies of today. It is a bold act to write such a play, and even bolder to threaten “peace” (Perestroika) as a conclusion to this panoramic examination of the heart.