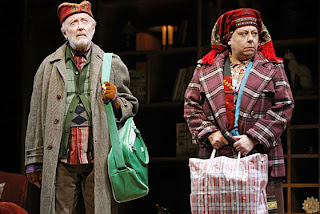 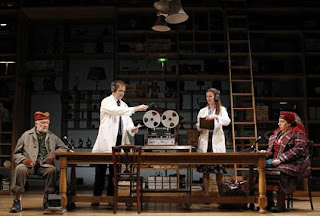 DEAD LANGUAGES
by Douglas Messerli
Julia Cho The Language Archive / Roundabout Theatre Company/Laura Pels Theatre in the Harold and Miriam Steinberg Center for Theatre / the performance I saw was on November 14, 2010

Presumably anyone interested in theater is equally interested in theater's major medium, language. That does not presume, of course, an interest in "dead languages," the focus of the major character of Cho's play, George (Matt Letscher), who is a linguist-scholar devoted to archiving dying languages before they disappear—at the rate of every two weeks, if we can believe George. Beyond that, however, any playwright must ask, as does Cho, if those numerous
dying languages might also be send to include our personal daily expressions.
At the moment George is attending to the last living speakers of Elloway, who he has brought, at great expense, from some vaguely middle European country. The major problem he discovers with this language is that the couple, who bicker only in English—Elloway is far too lovely a language to use for anger and argumentation, they claim—refuse to help with George's work. Resten (John Horton) and Alta (the wonderful Jayne Houdyshell) see no point to sharing their vocabulary: "Our world is already gone, and no amount of talk talk talk will ever bring back" what has been lost.
Nicely (and perhaps a little predictably) paralleling this predicament, is George's own relationship with his wife, Mary (Heidi Schreck), who is close to giving up on the idea that George, so brilliant with languages, might ever learn the language of love. She denies leaving all the cryptic messages that George finds hidden in his books, shoes, pants, etc: "Love or explaining how to use the remote control?" "Marriage or an old cardigan?" etc. Yet her denial reveals her inability to express her own private language of frustration, suggesting that she is as incapable of saving her world as are Resten, Alta, and George.
The playwright, Cho, has slightly seasoned her brew with the introduction of George's assistant, Emma (Betty Gilpin), who clearly has an inexpressible crush on her boss, going so far as to study Esperanto, one of his favorite languages, just to please him. She cannot seem to learn the language however, perhaps because, as her teach explains, she is using it for the wrong purpose. The teacher (played also by Houdyshell) explains that she too had a crush on another, a Dutch woman, which resulted in a similar problem: she could not properly express herself, and the woman left. In short, nearly all of the characters in The Language Archive can speak brilliantly when it comes to mundane or irritating situations, but have little skill, like most of us, with the language of the doves.
By the middle of the play, Mary decides to leave George, Emma determines that she will tell George of her love for him, and the strangely dressed speakers of Elloway decamp for a plane home—all leaving the linguist utterly confounded. What has happened to his well-ordered world?
Cho does not have an easy answer; nor does she offer solutions for any of her figures. Resten and Alma fall back in love, but leave their beautiful language to fall into oblivion. George becomes determined to tell Mary that he loves her, but, after she has magically met up with a former-baker who has provided her with the perfect mother dough, she has opened her own small bakery, discovering a joyful new purpose to her life. Emma attempts to escape George as well; she, in an ever more miraculous encounter, meets up with the long dead creator of Esperanto, the Russian ophthalmologist L. L. Zamenhof, who examines her eyes, clouded by her love; she returns to Geroge, now recognizing what Mary has previously told the audience:

Despite Mary's permanent absence, Emma never does develop a loving relationship with George, who continues to work alone, lost in the syntax of other people's lives.
Cho's play points to deeper concepts than it serves up. And the author has somewhat disappointedly spiced it up with whimsy—what some critics (mistakenly I believe) described as surreal or absurdist farce—that deflects the philosophical and psychological implications of her art. The Language Archive remains, for all that, a strong parable of what lovers—and by extension, committed believers of life—can and cannot fully express.