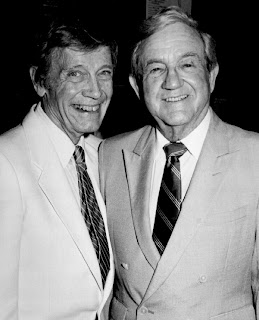 Jerome Lawrence and Robert E. Lee’s The Gang’s All Here (1959) is a play loosely based on the presidency of Warren G. Harding, remembered for the Teapot Dome scandal involving several of his friends and cabinet members.

Like Harding, Lawrence’s and Lee’s Ohio senator Griffith T. Hastings, name comes forth in the smoke-filled rooms of the Chicago’s Blackstone Hotel as an alternative to candidates (in 1920, General Leonard Wood and Illinois Governor Frank O. Lowden) who have Republican Party members deadlocked. Engineered by Walter Rafferty and other cronies in Lawrence and Lee’s play (in 1920 by Harry M. Daugherty) Hastings is elected and fills his major governmental posts with his “Ohio gang.”

In the play Hastings is presented as a man modest enough to admit to his limited capabilities and honest enough to claim that he is not up to the position; but through the intervention of his friends and strong-willed wife (who Hastings and others describe as “The Duchess,” Hastings, despite his misgivings, determines to run.

Once he is locked away within the presidential quarters, however, he hasn’t a clue how to begin governing, hiring on the spur of a moment a man employed to oversee his transition, and demanding the immediate presence of his cronies, who quickly fill his ears with speedy decisions concerning the issues with which he is now forced to grapple. In only a few weeks after becoming President, we see him sneaking away from the White House to play poker with his cronies—now all political advisors—and ready to sign on nearly any dotted line put before him.

Strangely, the only honest man surrounding him is Bruce Bellingham, the interim assistant he has hired. Bruce, along with Hastings’s wife, Frances, attempts to warn him away from his gang—his own Attorney General, Secretary of the Navy, Secretary of the Interior, and Head of the Veterans Bureau. By this time, however, Hastings has become so dependent upon their advice that he has no one else to whom he can turn and fires Bellingham, the only one willing to tell him the truth.

As the Hearn committee begins investigations, it becomes clear that Hastings must act; as he attempts to query the honesty of members of his own cabinet and staff, Rafferty reminds him that he has knowledge of Hastings’ sexual affairs which he’s willing to reveal. Rafferty’s moral jingoism, his long justification for his immorality, reminds one of Harry Lime’s argument with his friend Holly Martins in Carol Reed’s film The Third Man of ten years earlier:

He [Sam Cavendish] can afford morality. He’s rich enough. I’m not. Neither are you. The “land of plenty” for everybody except a politician, who sticks his head through the hole in the canvas and lets the goddamned free press sling mud balls at him. He can’t run his business like a business, because it’s never his business. It belongs to the blessed American public that doesn’t give a hoot in hell until some poor bastard gets his pinky caught in the cash register! Name me the job that demands more and pays less than serving the American taxpayer. The Customers’ Man can screw ‘em blind on the Big Board. That’s O.K. The Oil Boys can simmer the fat out of the ground, the Real Estate Sharks can bank a six-month million—everybody gets rich except the poor ass of a “Public Servant.” (Straight at Hastings) And you’ve got the gall to scream because a few of your friends are smart enough to do exactly what everybody else in the country is doing.

In the context of Rafferty’s argument, the actual president Harding’s campaign slogan—“Return to Normalcy”—seems bizarrely appropriate.

With the news of Ax Maley’s suicide (head of Hastings’ Veterans Bureau), Hastings must face his own political and real death as well. In Harding’s administration it was an assistant to Daughtery who committed suicide, while Fall, Miller, and, Forbes were convicted of fraud and bribery. In the Lawrence and Lee play, all other consequences remain in the future.

Harding clearly knew his presidency had been destroyed by the scandal, and in 1923 set out across the country to boost his own ratings on what he described as a “Voyage of Understanding.” Understanding for whom, one might ask: the electorate or himself? In Lawrence and Lee’s version it is Hastings who comes to the “understanding,” ultimately seeking the resignation of Rafferty before drinking a deadly medicinal concoction left behind in his Surgeon General’s bag. Harding’s illness was simply attributed to food poisoning—and his death soon after to a heart attack. At least Hastings dies with some recognition, with some sense of dignity.

The published volume of The Gang’s All Here begins with a short piece by the playwrights published in the New York Herald Tribune of September 27, 1959, warning the public to take the lessons of their play to heart in the upcoming elections. That election between Richard M. Nixon and John F. Kennedy was even more fateful in several respects than the 1920 race between Harding and the Democratic nominee James A. Cox. One candidate of the 1960 race clearly was a man (particularly in his later administration) with a notorious gang—the other a man with a notorious family.

Lawrence and Lee’s work functions as a terribly old-fashioned drama, and creaks in its historical underpinnings. Given that the 1960 election, for the first time, depended heavily upon television news coverage as opposed to the simple workings of backroom politics, the play seems particularly old-fashioned. With a cast that included E. G. Marshall, Howard Smith, Melvyn Douglas, and Jean Dixon the stage theatrics must have been almost magical; but reading it in 2003, the dramatic action seems to be missing.

What struck me most, however, as I read this play was that in terms of politics little has changed. The gang is still with us. President Bush won the 2000 election, in fact, by machinations that Rafferty and company could not even have imagined. The three R’s with which Bush and Cheney now control our country—Rove, Rumsfield and Rice—far more than those basic areas of learning, Reading, Writing, and ‘Rithmetic—serve the President as a gang whose personal agendas far surpass those of Harding/Hastings’s petty greed. Lawrence and Lee ask a naïve question, but one that should not be glibly answered by Americans today:

If the man we fondly X’d in a voting booth turns out to be
a struggling incompetent, whose fault is it? The President’s?
….It’s too easy to blame the gang around him, because oppor-
tunists are always waiting to fill any governmental vacuum.
Perhaps the real trouble lies in our own reluctance to think
about history except on that November Tuesday.

In the front of my copy of this play, I discovered, while writing this piece, the signature of cast member E. G. Marshall, which reminded me of my brief encounter with him in 1993, when I must have asked him to sign the book (purchased, if I recall, at Strand Bookstore). Marshall had long been one of my favorite actors from childhood: I had seen him in episodes of You Are There on television in the 1950s, “The Death of Socrates” (1953) and “Washington’s Farewell to His Officers” (1955), on the Hallmark Hall of Fame production of The Little Foxes (1956), in the movie Twelve Angry Men (1957), and, most memorably, as the defense lawyer Lawrence Preston in the television series The Defenders, one of my favorites of 1960s television fare.

Some might recall that he also appeared in numerous Broadway productions, including the original production of Thornton Wilder’s The Skin of Our Teeth (1942), Eugene O’Neill’s The Iceman Cometh (1946), Arthur Miller’s The Crucible (1953), and the short-lived Broadway premiere, with Bert Lahr, of Samuel Beckett’s Waiting for Godot (1956).

A long-time friend of Jerome Lawrence’s, Marshall read from Jerry’s novel A Golden Circle with Tony Randall, Jane Alexander, and Jerry himself at my Algonquin evening (described in My Year: 2005); but he also joined Jerry and me the next day as we taxied over to a Barnes & Noble bookstore on the West Side for another reading of Jerry’s novel. I recall little of our conversations during these encounters, but I remember him as being brisk but friendly. He died five years later, in August 1998.
Posted by Douglas Messerli at 8:05 AM