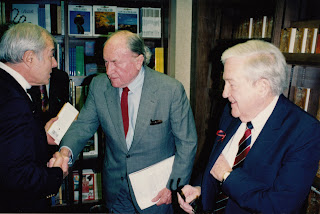 Edward G. Marshall and Jerome Lawrence at
Barnes & Noble the day after my celebration for Jerry
Photograph (c)2010 by Douglas Messerli 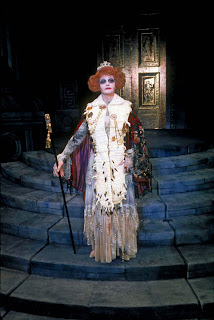 My Broadway Hit
by Douglas Messerli

In 1969 I bought a ticket to a preview performance of the Broadway musical Dear World. This musical, based on Jean Giraudoux’s The Madwoman of Chaillot, was written by the Broadway veteran libretto and playwrighting-team Jerome Lawrence and Robert E. Lee. The music was by Jerry Herman, and, like Mame, Herman’s musical based on their Auntie Mame, starred Angela Lansbury; the supporting cast included Jane Connell and Milo O’Shea. Despite my empty bank account (indeed I had no bank account in New York), I had saved up just enough to purchase this ticket, and I was excited about the prospect of seeing what promised to be another Broadway hit!

As I left the lobby of the Mark Hellinger Theatre and walked a half block to Broadway I reached into my pocket to examine my newly acquired treasure. But the pocket was empty. I tried another, felt in my back pocket, jammed my hands quickly into the deeper pockets of my overcoat. No ticket! How could I have lost it in a journey of a half block? I had, after all, held the ticket in my hands in the theater lobby. Where had I put it? Had it fallen out of my pocket? I retraced my steps without finding it, returning home — I was now living in a Columbia University apartment on 111th Street almost facing the Cathedral of St. John the Divine spiritually depressed.

It was mid-December and I’d bought this ticket as a kind of Christmas gift to myself. Now with the holiday quickly approaching, I had nothing to do, nowhere to go. For some inexplicable reason, I dressed (shabbily I am certain) for the theater on the evening for which I’d purchased the ticket and arrived at the theater just as the crowd moved forward to find its seats. I moved with it, stopping to speak confidentially to one of the ticket-takers. “Honey, you see that woman over there. Go talk to her,” the ticket-taker said. I went over to the woman she pointed out—her name apparently being Dorothy, since that was what her blouse announced—and abashedly tried to explain my presence: “I’m sorry to bother you, and I wouldn’t be bothering you, but I bought a ticket for this performance and lost it. Is there anything I can do? I’m telling you the truth.”

“Of course you are, honey. I believe you. Come with me,” she said, taking my arm and leading me up into the balcony. “Here’s a good seat,” she gestured to a location that was probably in a much better location than the one for which I had originally paid.

“Thank you,” I called out as she turned to back to the lobby. “Thank you.”

Unfortunately, the musical was not very good — was certainly not a “hit.” The work was far too intimate to survive the canyons of the Hellinger theater, and the sets by the acclaimed Oliver Smith seemed to be located in some grand palace rather than the supposedly dilapidated home of the Countess Aurelia, the madwoman of Chaillot. Jerry Lawrence later admitted to me that Joe Layton, the director, and Jerry Herman had insisted upon the larger-than-life production. But it wasn’t the kind of musical, with its dark expressionist elements, that could sustain the brassy theatricalism of Herman’s more populist work.

In any event, I did get to see my play. Don’t let anyone ever tell you New Yorkers are always rude and inconsiderate!

But this story is not meant to portray another of my coincidence-haunted New York nights. I suspect the kindness shown me was not the first or only example of Dorothy’s empathy for her patrons. I mention this event only as prelude to an evening that truly was a Broadway — my Broadway—hit, even though it didn’t occur in a regulation theater.

In 1992 I hosted a book party in celebrating the publication of a novel by William Fadiman. Fadiman was a salty Hollywood figure — he’d been Dore Schary’s assistant at MGM studios when Schary was chief of production and, later, president of that studio. Several Hollywood celebrities, accordingly, were in attendance, as well as William’s more-famous brother, Clifton, who after a long stint on NBC’s “Information Please,” had been the senior judge for the Book-of-the-Month Club, later editor in chief for the publishing house, Simon & Schuster, and The New Yorker book editor. It was there I met Jerome Lawrence.

Throughout my childhood, I had admired the Lawrence and Lee team. Auntie Mame—along with Rosalind Russell, who will always be Mame to me—was one of my very favorite characters of the stage and movies and Inherit the Wind was among the American plays I most treasured. My companion Howard and I’d also seen their The Night Thoreau Spent in Jail (not one of my favorites) in an Arena Stage production in Washington, D.C. Jerry and I quickly became friends,and few weeks later I visited him at his legendary Malibu home filled with theater memorabilia—a grandly modern house that tragically burned to the ground during the canyon fires of 1993 shortly after the events I am about to describe.

We spoke of the possibility of my reprinting some of Jerry’s and Robert E. Lee’s plays. But first—there was often a carrot attached to my friendships with elderly men—might I take a look at a novel he had just completed? The book, A Golden Circle—a novel about theater based on several of the figures he’d known—was not a particularly brilliant novel, and was certainly not the kind of fiction Sun & Moon Press generally published. Yet it was an enjoyable read, a gentle and loving tribute that might attract any slightly sentimentally inclined lover of the theater. Somewhat reluctantly, I agreed to publish it.

The book appeared in early 1993, and I determined to promote it later that year with a party at the Algonquin Hotel in New York. We settled on a night in May, when Jerry’s friends would be in town, he suggested, to see plays before voting for the Tony Awards. He handed me a long list of invitees, to whom my assistant Diana Daves and I mailed out formal invitations. It included nearly everyone of theater fame!

For my visit, I took the Thurber suite in the hotel. We’d rented the Oak Room, and Jerry had quietly planned the performances. I had ordered hors d’oeuvres and liquor (a full bar), arranged for a photographer, and planned on serving as Master of Ceremonies and general host.

Pianist/singer Bobby Short begin the performance part of the evening during the cocktail hour, and when the guests were soon after seated, Michael Feinstein took over the piano and sang a song from Dear World. I took up the mike, explaining who I was and how delighted I was to see all my old friends—even though I’d never actually met them. But they were old friends, I explained, from my childhood, a time in which I memorized the Burns-Mantle playbooks, read their plays, and purchased their recordings — even before we’d owned a record player! Now I was overjoyed to meet them in the flesh.

Jerry Herman took over the piano with Michael Feinstein singing a medley of Broadway songs, and before we knew it, E. Y. Harburg had been drafted to sing “Old Devil Moon” from his Finian’s Rainbow (the musical that has reappeared time and again in my life). A reading from Lawrence’s novel by Tony Randall, Jane Alexander, and E. G. Marshall was next on the bill. Paula Robison followed with a flute solo, and Michael Feinstein returned to the piano to sing more songs, several of the audience members joining in.

On the plane to New York, I had sat next to an elegantly dressed woman who talked a great deal about the theater, and on a whim, I had invited her to the affair. As the evening came to a close, she came over to me and whispered into my ear: “This is the best thing on Broadway! I couldn’t have imagined such an evening possible.” Neither could I.

Soon after this New York theatrical event, we had a smaller west coast celebration for Jerry’s book at Books & Company in Malibu. At this affair, actors Martha Scott and Burgess Meredith, along with Jerry and his young “secretary” Will, read passages from the book. In the audience Carol Channing sat throughout the performance with her purse perched atop her head, evidently for protection from the afternoon sun. I’d long before witnessed her performances of Hello, Dolly! in two different cities, Chicago and Washington, D.C.