Douglas Messerli "On the Side of the Angels" 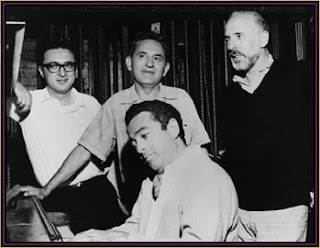 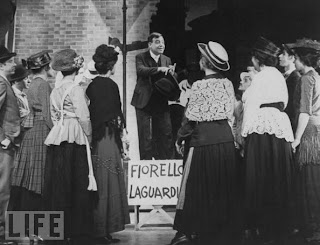 Tom Bosley and cast in Fiorello!, cover of Life 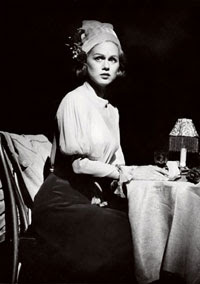 Barbara Cook in She Loves Me


ON THE SIDE OF THE ANGELS
by Douglas Messerli

The news of the death, on November 3rd, of Broadway composer Jerry Bock loosened within me on a series of memories relating to his numerous compositions. Combined with the death, on October 24th of Joseph Stein, writer of the book of one of Bock's greatest hits, Fiddler on the Roof, and the death of actor Tom Bosley, the lead in Bock's early musical Fiorello!, a few days earlier on October 19th, it seems almost as if an entire gathering of Broadway greats connected with Bock and his still-living lyricist, Sheldon Harnick, has been swept away.

Jerrold Bock was born in 1928 in New Haven, Connecticut, but was raised in Flushing. What I didn't know was that Bock attended what might have been my alma mater, the University of Wisconsin; he was already a noted piano player and beginning to compose. During the 1940s and early 1950s Bock worked on Sid Ceasar's and Imogene Coca's television shows, leaving for Broadway in 1955 to write for the revue Catch a Star. The following year, Bock again worked with Lawrence Holofcener, along with Joseph Stein, on the musical, Mr. Wonderful, starring Sammy Davis, Jr. It ran for 383 performances.

In 1958, Bock again worked with Stein, along with a new lyricist, Sheldon Harnick, on The Body Beautiful about a would-be fighter from Dartmouth. The musical lasted only 60 performances, but was musically strong enough that it attracted the attention of veteran director and scriptwriter George Abbott and producer Hal Prince, who chose the Bock and Harnick team to compose their 1959 production on the life of New York City mayor Fiorello La Guardia, Fiorello!, which went on to win the Tony Award for Best Musical and a Pulitzer Prize. Starring Tom Bosley as La Guardia, it ran on Broadway at the Broadhurst Theatre and, later, The Broadway Theatre, for 759 performances.

Fiorello was one of the earliest original cast recordings that I purchased at a time when my house still hand no record player. When my parents broke down and purchased a stereo, I listened to it time and again, until I had nearly memorized the music and lyrics. I recently heard it again, and am still humming "On the Side of the Angels," "The Name's La Guardia," and the hilarious "Little Tin Box."

"Standing firm, side by side, on the side of the angels"—at least of the "producing" kind—the team of Bock and Harnick went on the next year to write, again with Jerome Weidman and George Abbott, a musical on the 1890s red-light district of Manhattan, Tenderloin. Although this work lasted only 216 performances, it received good reviews and several of its cast members were nominated for awards. One of the show's songs, "Artificial Flowers," sung by Bobby Darin, became a popular hit.

In 1963 the two wrote an acclaimed marionette show, The Man in the Moon and still found time to compose one of their most beloved musicals, She Loves Me. Based on the film, The Shop Around the Corner and Hungarian Miklos Laszlo's play Parfumerie before that, the Bock and Harnick version featured such Broadway greats as Daniel Massey, Barbara Baxley, Jack Cassidy, Ludwig Donath, and the incomparable Barbara Cook, as a stunningly beautiful Amalia Balash.

I first heard of the musical's existence from Peggy Cass on the television show To Tell the Truth, when she begged people to attend the musical which she had seen the night before the broadcast. It is so wonderful, so magical, she suggested, that everyone should come and help it to survive.

Alas, the show lasted only 302 performances. But for me, it has lasted an entire lifetime. In 1963 I ran out immediately to buy the original cast recording, and sat for hours listening to its elegant songs. It seemed—and seems still today—unlike any other musical. It has no particularly hummable songs or any number that might stand apart from the whole—except perhaps for the purposely sentimental "Days Gone By." But then one loses the irony of that piece outside of the production. The major songs of the musical, "Tonight at Eight," "Will He Like Me?" "Vanilla Ice Cream," and "She Loves Me," are all about love in some respects, but are filled with the terror of the future, a fear of remaining unloved, and a simple nervousness that things might not go "right," none of them, except the last, really standing alone as a love song. And that title song is sung by the hero to himself, based on a realization that the love is a secret from the lover herself. Cook sings "Will He Like Me?" with such a lush trepidation that the work absolutely radiates, as does her "Vanilla Ice Cream," whose major lyrics consist of a statement of wonderment: "He brought me vanilla ice cream." Another Cook song consists primarily of the question "Where's my shoe?" Yet every song seems nearly perfect, and I listen to them often.

This musical has appeared again and again in my life at important times. As I roamed the University of Wisconsin campus in 1966, a trip that determined I would transfer from Milwaukee to Madison, I wandered far beyond the English Building, then at the top of Bascomb Hill, down to the agriculture school and other far-flung areas. I was struck with the vastness of the campus. But I was also intrigued by what looked like a large tent sitting at the top of a hill upon which, apparently, a series of bleachers had been constructed. Sneaking in through a back tent flap, I saw far below me a stage on which the actors were rehearsing, to my surprise, She Loves Me. Apparently this production was preparing, after a couple performances on campus, to travel to outlying communities throughout the state, visiting the university's agricultural constituents, serving as a kind of cultural outreach. I sat for several hours without discovery, enjoying the live performance alone.

Later in 1978, Howard and I caught the PBS production of the musical on television, and for a while we owned a tape of that performance, which mysteriously disappeared a few years later. I also happened to be in New York during the 1993 Roundabout revival at The Brooks Atkinson Theatre, and quickly purchased a ticket to the show. That version, staring the engaging Boyd Gaines and Diane Fratantoni ran for 354 performances. I have to admit that I loved it so much that tears remained in my eyes for most of the evening.

Only a year after this memorable work, Bock and Harnick again struck gold with their famed Fiddler on the Roof, a musical I saw upon returning from a year in Norway in a traveling production in Chicago and, later, in other cities, including, I believe, Madison.

Fiddler was, quite obviously, their greatest "hit," even if it is not my personal favorite. With Zero Mostel at the helm, Bock and Harnick's Russian hamlet of Anatevka was depicted with larger than life types. And here the team did write several songs that would become popular outside the musical setting, including "Sunrise, Sunset," "If I Were a Rich Man," and "Far From the Home I Love." One of the biggest musical hits on Broadway, it ran 3,242 performances before closing, and his been revived several times, most notably in 2004, when it ran for 781 performances.

The remainder of the Bock and Harnick musicals, the delightful The Apple Tree, The Rothchilds, and their contributions of Never Too Late, Baker Street, and The Madwoman of Central Park could not, in my estimation, match their earlier works. The Rothchilds had a long-running production of 505 performances, but I do not feel it comes close to Fiorello!, She Loves Me and Fiddler on the Roof in its musical energy. But who's complaining? Jerry Bock is clearly one of the great American musical composers, and the theater will be less exciting without him--as well as writer Joseph Stein, and actor Tom Bosley. In their deaths we have lost much of our courage as well as part of our hearts.