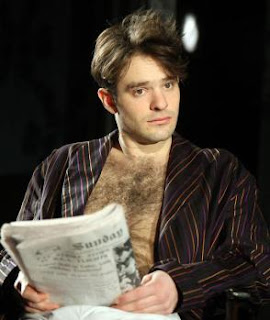 Charlie Cox in 2008 prodution of "The Collection" 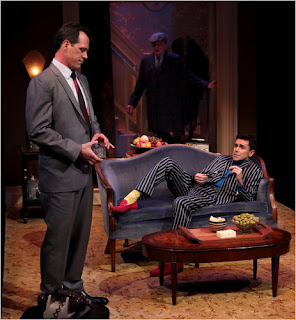 2010 production of "The Collection"


Harold Pinter's brilliant short play of 1961, The Collection, is a work about two couples, Stella and James, married for two years, and Harry and Bill, living together for a number of years. Both pairs are clearly dissatisfied with their relationships or, at least, interested in sexually exploring alternatives—but fearful, also, of destroying the commitments they have made. Although James runs his wife's dress business, it is clear that she is the designer. Bill, as Harry tells both James and audience, has been picked up in the slums, and is obviously completely dependent upon his older lover.

The play begins with a late night/early morning call to the Belgravia house of Harry and Bill by a caller who refuses to divulge his name, a man seeking Bill. This call, in turn, sets off a series of calls and, soon after, visits by James to the house in search Bill, who, he has been told by his wife, sexually molested her in her hotel room during a meeting of clothes manufacturers in Leeds.
We never discover whether or not such an encounter actually occurred; both Bill and Stella change their stories several times in the course of the play. But it hardly matters, for the true energy of this play occurs not in the discovery of any "truth," but in the opportunity for new encounters—for James it might almost be described as stalking—with other beings, and the danger that interchange represents.

If indeed Bill and Stella met in Leeds, even to simply talk about sexual possibilities, as Bill insists late in the play, there is a parallel pattern in James' visits to Bill. Both of these rendezvouses are highly sexually charged and physically threatening. Yet both also began and end in a war of words. Despite his position as intruder, Bill invites himself to drinks, demanding olives and a place to sit, while gradually insinuating himself into James' life, going even so far as to query him about Harry and his supposèd dislike of rabbits (those animals who fuck so prolifically).

It all ends, quite absurdly, with Bill lying prone on the floor, James standing over him in an overtly sexual position while the "conquered" man alternately denies and confirms James' imaginative recounting of the "rape" of his wife.

The second visit actually seems like an arranged "date" between the two, since James has prepared a cheese board and put out a bowl of olives. As the two verbally spar, the conversation turns to a discussion of each other's bodies which ends in a shared stare in the mirror, and a witty repartee in which the offered olives are denied by James, despite his insistence that he be served them on his previous visit:

JAMES: I don't like them.
Pause.
BILL: Don't like olives?
Pause.
What on earth have you got against olives?
JAMES: I detest them.
BILL: Really?
JAMES: It's the smell I hate.

It doesn't take a Freudian psychologist to make one realize that they are not talking about the fruit of the Olea europaea, or that James, although clearly attracted to the other man, has some reservations when it comes to acting out what he feels.

Only a few minutes, later, however, he has picked up a knife, challenging Bill to a duel and proclaiming that he has another in his "hip pocket." Bill again plays "the sissy," refusing to act out the phallic challenge that James has offered up. This time, however, James impetuously propels his words, for the first time in the play, into action: tossing the cheese knife into the air and cutting Bill's hand, producing, perhaps, something tangible in the way of a small scar.

In a world only of talk, finally something has happened, someone has at least been palpably touched. Harry, observing this scene behind the doorway—after having endured his own conversation with Stella—knows quite clearly what the sword play means, and lashes out in an emotional outburst of hate against the "slum-boy slug" he has brought into his proper house:

The older Harry is clearly fighting to keep his young lover the only way he knows how. Like James he dominates the passive Bill, but unlike James his is only a world of words, and he can only wonder when action may again breakout. Ultimately, of course, James must also retreat, as the civilized British society insists. They all return to talk, meaningless politeness. The talk utterly defeats any acts of love. Love, after all, in this world has less to do with action, than accretion, is something held together through time and repetition. As Harry says to Stella about James: "I found him in a slum, you know, by accident"—as if he were an object he discovered in a shop to be brought home and added to his collection.

Yet behind their language looms terror. James returns home to reassure himself that his wife did indeed do nothing but talk to Bill that night in Leads. "You didn't do anything, did you?" he almost pleads. "That's the truth, isn't it?" Her silent look, "neither confirming nor denying," "her face friendly and sympathetic," with, in the television version I saw, an ever so slight smile upon her lips, tells us nothing. As Pinter knows, silence is so dangerous.