Douglas Messerli "This Is It" 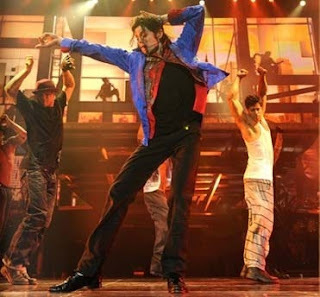 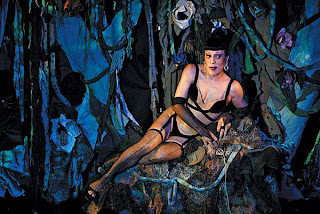 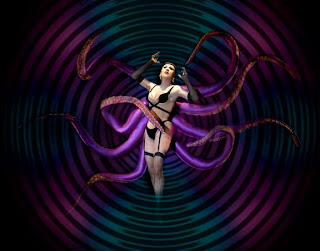 ALL MY MYSELF
by Douglas Messerli

Kenny Ortega (director), with performer Michael Jackson This Is It / 2009

Despite the obvious outcries by viewers and critics that This Is It does not portray a performance (indeed there is no audience other than the stage workers, waiting dancers, and others involved in the show) and that it is not even a film (having been intended as a personal documentation of the rehearsals) I found the work to be extremely watchable, if only because its focus, Michael Jackson is, metaphorically speaking, so "blurred out" that he creates an even greater mystery about him than the cause of his recent death.
A boy (even at the age 50), yes, a sensational dancer (indeed, but not, necessarily, here: although many of moves are quick and lithe, the overall choreography, particularly in the robot army number, is based more on fascistic-like marches rather than the smooth glide across space we usually associate with Jackson), a singer (true, but although we get various passages from his catalogue of "greats," for the most part the performer is not singing to his full capacity in an attempt to "save his voice"; at one point when he does begun to belt out a song, he interrupts, "Don't make me sing full out.")
When he does speak, it is, for the most part, psychobabble about his caring for the earth (the worst number in the film is the unbearable "Earth Song"), a hand-joining pep talk with his talented dancers, musicians, and staff, and quiet mumblings when something goes amiss. The most insightful moments are when Jackson speaks of his art, of the necessity of waiting between beats, stepping at the right moment into the spotlight, pausing in a musical phrase, getting the precise beat of a song. If nothing else, it is clear that Jackson is a consummate showman. Yet we get little insight into the man, and only glimpses of what the final performance might have looked like. Certainly it would have been somewhat spectacular, but clearly, also, it might have revealed that the aging Michael was no longer at his top, and the directions in which his art was apparently taking him were distances from the Astaire-like perfections of "Thriller" or his famed "moon walk."
I know I will be heckled, perhaps even hated, by all those who love the "King of Pop," but I feel that Jackson's music was never his great contribution. Most of his best known songs are repetitive ditties gaffed up by inward gulps of breath and sigh. He was a great dancer, a performer who knew up until the last day of his life how to move his thin body to convey a deeply asexual sexuality that made him into something for everybody to love. But This Is It, I am afraid, is not what it/he is or was. If anything, the documentary further mystifies us in our search to find out who this "man in the mirror" was. Here he remains only a shadow of a shadow, and one wonders "Does he have any reality away from his audience?" One comes to see him, ultimately, as one of the most lonely beings in the universe, like a frightened child, demanding doctors be there every night to put him asleep. Was he afraid of death or afraid of life?

A few days after seeing This Is It, I attended a performance of the drag queen Joey Arias directed by Basil Twist. Like Jackson, Arias is an excellent performer, but here it is the voice that dominates, not the feet. Indeed for his great dance finale, Twist provides him with dozens of dancing legs and scene right out of Busby Berkeley, yet those high kicking gams are puppets, not Arias' own slim limbs.
While Jackson worked big, on a gargantuan scale, Arias does more with small, working with the stunning sets and costumes of Twist, Thierry Manfred Mugler, and Chris March.
Without any apparent logic, Arias begins his vocal narrative as a captive in a alien space ship, attentively watched over by alien men, until, evidently thrust out of this spatial Eden she falls through space into a kind of campy corduroy-covered jungle, an earthly Eden with a large python slithering through its confines.
Evidently Arias is thrown out of that heaven as well, ending up, inevitably, in Hell, sexually entrapped by Satan's slaves and soon after wrapped in the arms of a giant squid.
Appearing like a slightly pouting, perhaps betrayed dominatrix with a long pony tail, Arias sings out in raspy voice through an equally hair-extended mic in a manner that is often more interpretive than Madonna or even Bette Middler, beginning with Led Zeppelin's "Kashmir" and moving quickly into Lennon and McCartney's "Lucy in the Sky with Diamonds." Her moving version of Eric Carmen's "All By Myself" and the Billie Holliday-like rendition of "You Changed" is vocally more powerful than anything Michael Jackson might have spit out.
Suddenly it's time for her to get herself down to The Great White Way, but her talent is so enormous that when she arrives in Manhattan she is the size of King Kong, swallowing up male passengers on trains and in taxis as she moves through New York's neighborhoods, ending up in a scene right out of a motion picture musical.
Like Jackson's missing person, Arias' twisted being—that is, his persona—is just that, a figure of true talent, funny and entertaining enough for anyone to enjoy, but also a kind of monster who can never quite fit into everyday life.
Needless to say both audiences for This Is It and Arias with a Twist applauded with complete abandon.