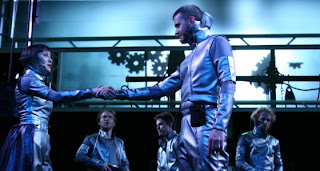 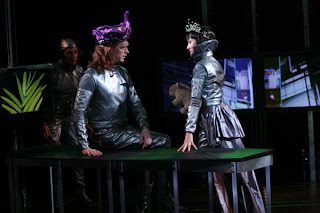 FORCES OF GRAVITY
by Douglas Messerli

Known for its innovative retellings of major dramas and events (Hamlet, The Hairy Ape, The Emperor Jones, etc.) The Wooster Group has moved into even more challenging territory with their newest extravaganza, La Didone, a retelling, in operatic form, of Francesco Cavalli's 1641 opera of the Carthagian Queen Dido and her new lover, Aeneas.
Not only has director Elizabeth LeCompte taken on the challenges of opera in this work, but has overlaid the Cavalli work (unknown to most opera-goers) with a grade-B science fiction story, directed by the Italian film maker Mario Bava, Terrore nello spazio, known in this country as Planet of the Vampires. The film has it fans, Ridley Scott among them, whose film Alien was obviously influenced by this campy movie.
On some levels it seems quite justifiable—and may have appeared to be absolutely "brilliant" in the early inception of the work—to bring the two, what used to be called "high culture" and "low culture" together, allowing them to comment on each other and to elucidate related themes. Both worlds, Dido's Carthage and the planet Aura, are visited by outsiders: Aeneas, prince of Troy, washes up upon the shores of Africa after the a deadly sea storm; the spaceships Argos and Galliot, investigating mysterious signals coming from Aura, are caught in a force of gravity and plummet quickly to the new planet's surface, the Galliot destroyed in the process.
That same kind of gravitational pull seems to happen to Aeneas, as Cupid (disguised as Aeneas' son Ascanius) plunges an arrow into Dido's breast, who, having remained true to her the memory of her dead husband, suddenly finds herself madly in love with the visiting stranger.
The worlds for both sets of explorers suddenly shifts, as the remaining members of the Argos crew senses strange beings around them who they cannot see, and Aeneas is drawn into a boar hunt—presented almost as a frenzied sexual prelude—during which he and Dido retire to a cave to make love.
The inhabitants of the planet Aura, in turns out, are invisible beings whose sun is dying, and who can survive only by taking over the bodies of their visitors. As in Invasion of the Body Snatchers, these beings become the people whose bodies they invade; and, as the now-repaired Argos takes off into space, there appears to be only one "real" survivor left, the others having been transformed to Aurans.

Similarly, Dido hopes by conquering the heart of Aeneas to lure him into Carthage society. But the gods call him back to Italy, and Dido is left alone with a broken heart. In the Aeneid she commits suicide, but in Cavalli's version, she regains her sanity, marrying the nearby King Jarbas, who has long been in love with her.
The Argonauts, in a Rod Serling-like plot development, realizing they do not have the energy to return home, choose a planet on which to settle: the third planet from the sun. We realize that either we are already the ancestors of these alien zombies or are about to be invaded.
As always, The Wooster Group performs all of this lunacy with great seriousness, and that, in turn, saves most of this work from simply becoming camp. The singing, particularly Hai-Ting Chinn's Dido, John Young's Aeneas, and Andrew Nolen's Jarbas, was excellent and entices one to see the complete Cavalli opera (the original lasts 4-5 hours, while this production ran for about an hour and a half). Yet for all of the bravado and talent of the company, there remained something about the production that left one feeling that the connections were frail and facile.
Certainly, it challenged its audience. Just the attempt to keep two simultaneous stories—the one in Italian, the other in a quietly-spoken film jargon—both of whose words often scrolled quickly forward at the same moment that computer screens deliver up various images, was, as Los Angeles Times theater critic Charles McNulty described it, "an exhausting cerebral spin." Experienced often enough, such intellectual activity could possibly save one from early dementia.
Yet, at heart, I felt this work was intellectually empty, and spiritually had no real soul. The laughter it evoked was from the bland sci-fi jargon ("How do we repair the meteor rejector, Mark?), while the delight it offered was only of the musical sort. Between the two lay a hollow art.