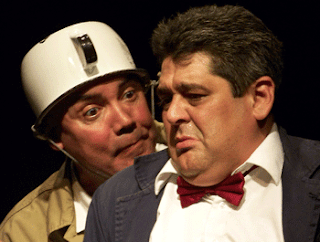 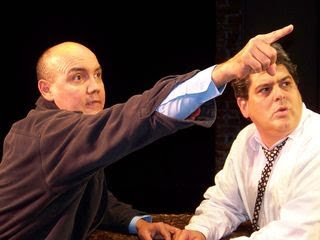 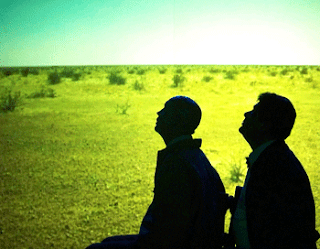 THE TRAVELING TABLE
by Douglas Messerli

Two men sit at a table, quietly talking, occasionally—at moments more and more often—breaking out into long poetic or narrative passages—then, with an explosion of terror, suddenly growing quiet, facing one another as if they had nothing to say. It is the world of an Argentine prison during that country’s “Dirty War,” where men are allowed only one hour each Sunday to interact with their fellow prisoners, a life-saving time when men come together to escape their growing madness, acting out stories and dramas of life, most of them vaguely based on Don Quixote and other works, through which they could embrace the impossibilities, the dreams, and the absurdities of their lives.
Author Vargas created this play from events that occurred to his brother during that brutal military regime in the 1970s until 1983, where the only line between madness and memory was the enactments of these amateur performers. Since the prisoners were not allowed to stand or move about, the drama is one of the imagination, a salvation of words only. In the dramatic presentation of this Kafkaesque, sometimes Beckettian reality, the actors—symbolized by two players, Jesús Castaños-Chima as de la Mancha and Arturo Díaz de Sandy as a sometimes reluctant Panza—play out their recreated versions of the Cervantes classic. Both are brilliant, encapsulating their imaginative voyages by moving chairs and table, which roll across the floors of the small 24th Street Theatre in south central Los Angeles in conjunction with leaps of creative stories and dismal pauses as they briefly lose all hope.
The production, presented in Spanish with English-language captions, is difficult to follow for the non-Spanish-speaking visitor. I longed for an English-language version of this complex text which I could crib to help readers comprehend the dense poetic complexity of the original. Yet anyone with an iota of theatrical experience might be able to imagine the wonder of actors, forced to remain basically frozen across from one another, creating a literary forum in which they explore some of the most poetic and profound of dialogues that deal with their foes, real and imaginary, as they hallucinate a reality outside of their internments. The fact that even these flights of imagination are constantly interrupted by guards who invisibly return again and again to check on the prisoners’ behavior, only accentuates their intellectual courage.
Throughout this intense drama, in which action is permitted only through the rolling furniture, the characters often grow despondent, like Beckett figures, unable to go on. Yet time and again, they do go on, they talk, dream, imagine, speak, shout, scream, cry out, and go dumb in an attempt to bring meaning into their empty and often absurd lives, in what one description of this play correctly describes as “an oblique strategy for survival.”
At the center of all of this is the great knight-errant of Cervantes, who time and again mistook windmills for giants, old withering women as maidens, prisons for paradisiacal gardens—a world that denied precisely what these men had to face day and after day. What might such American prisoners have proffered as an alternative is not easy to imagine: a giant white whale, breaking through the prison walls? This is most definitely a Spanish-language fantasy, one that has allowed many through the centuries since its first creation to imagine wonderment where there is none permitted.