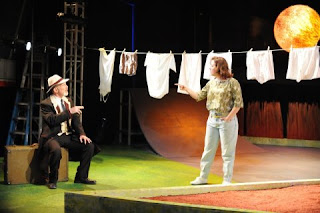 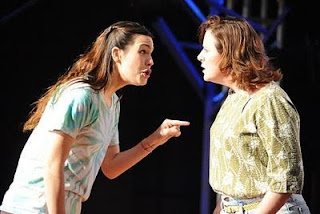 MUSIC FROM ANOTHER WORLD
by Douglas Messerli

Mac Wellman The Hyacinth Macaw / performed aboard The Queen Mary ship, Long Beach, California / the performance I saw was on March 12, 2011

As the publisher of Mac Wellman's two volume-set of plays Crowtet and other Wellman fictions, plays, and books of poetry, I have grown so used to the praise that most often accompanies his performances and publications that I was a bit shocked by the series of quite negative reviews in the local press for the second of the Crowtet plays, The Hyacinth Macaw, performed recently by the California Repertory Company aboard the Queen Mary ship in Long Beach.
I have always thought of The Hyacinth Macaw, along with the first of the series, A Murder of Crows, as one of Mac's best works, and I included that play in the anthology we edited together, From the Other Side of the Century II: A New American Drama 1960-1995, for that very reason. I had seen A Murder of Crows at Primary Stages in New York City way back in 1992; the third play of the Crowtet quartet, Second-Hand Smoke, was performed as a reading by the Bottoms Dream group in Los Angeles in a series of readings over two years which I co-sponsored. I also saw a reading of that play in New York. Bottoms Dream presented the premiere of the final Crowtet play, The Lesser Magoo in 1997, a production which I attended. Accordingly, The Hyacinth Macaw was the only play of the series I had not seen, and I thought it a lovely idea to dine on the Queen Mary and stay overnight in the ship's hotel overnight with my companion and friends Marty Nakell and Rebecca Goodman.
Like most of Wellman's work, highly praised over the years, The Hyacinth Macaw is filled with wonderfully irrational language along with what appear to be everyday aphorisms, parables, and commercial-like babble. The combination allows almost all of Wellman's work to straddle two fences: his characters and locale are often middle-class Midwesterners, behaving—or, at least, attempting to behave—like everyone else, while suddenly finding themselves in a tangled, bizarre series of metaphysical conundrums for which they have simply not been prepared.
In The Hyacinth Macaw the typical American family living in Gradual, Ohio (a town with "a gym, a school, a mall, all the normal things"), comes face to face with Mr. William Hard—representative clearly of all the "hard" things they will have to face—who tells the daughter Susannah what she has always wanted to hear, she's an orphan, a "useless yanked-up thing." Presenting a letter to Dora, Susannah's mother, he reveals, moreover, that the father, Ray, is a duplicate and is doomed to leave the family forever, which seems somewhat agreeable to both husband and wife. They all are, after all, bored with the complacency of their lives, Ray revealing that years before, when he was "a kid" "I went crazy, and they hauled me off to a nut house." He tells of writing a perverted drama, "dwelling on the topic of lips and thighs." Over the years, although the urges have not abated, he has "trained" those urges with "patience, and little sweet gifts, cookies, chocolates and the like."
Dora reveals a longing to escape as well, and in the final act leaves her home with Mad Wu who whisks her away to the nearby town of Moon Hat.
In the final scene Susannah and William Hard, her now surrogate father, bury the sick and dying moon, clearly suffering from the world's lack of romanticism.
In short, Wellman's play seems closely related to a mix of Albee's American Dream blended up with large doses of soap opera events coated with a thick compound of linguistic play and word wizardry which thoroughly amuses and confounds us. So what's not to like? And why describe his play, as did the reviewer Joel Beers, of the OCWeekly as "an adolescent episode of theatrical dementia," or accuse it, as Greggory Moore of Greater Long Beach, of suffering from the "imitative fallacy," a work that in talking about boredom, imitates boredom?

The director, James Martin, has long worked with Wellman, producing one of the best productions, Cellophane, I have ever seen, and overseeing several others, including The Lesser Magoo. Yet here, I am afraid, he has lost some of Wellman's necessarily quick pacing, and by the last scenes the play begins to lag.
Certain scenes, such as the father's long and absurdly funny farewell, were played too much for laughs. In the script the father drinks only water, but in Martin's version, he increasingly imbibes in wine, getting drunker and drunker in the process. The problem with such a literal reading as this is not only that it takes our attention away from his words, but seems to suggest his long-winded, somewhat meaningless chatter can be explained away: he's just drunk. In truth, Ray's speech is filled with a kind pathos that is crucial to our feelings for him:

I see myself a feckless youth hardened by
prolonged abstinence and chilblains, aghast,
alone, in agony. I see myself, a young shoe-
salesman on the windy plains of West Gradual,
where the Bug River hyphenates the mighty Ohio
with its moxie doodle, a cipher, a tragic hipster,
a tramp. I encounter the notorious Mu Factor
in the sad, shanty towns of Shenango and deem
myself wise with the leer of unholy knowingness.

As in Allen Ginsberg's Howl, there is a sort of self-centered, self-loathing poetry in Ray's speech, a kind of poetic richness that transcends his ordinariness. Wellman's works are filled with these kind of poetic moments, when despite their drab lives, the characters speak out momentarily in a dream of wonderment. Dora gets her turn in the next scene with her daughter:

The time comes when you hear the music
from another world. You know the
music is from another world because
it is so sad and strange you feel
as if you awakened from a dream,
flung your fists out in a nightfever
and caught a living sparrow in your
hand. Only, the bird sings a piercing
wildnote threnody that drives you
unwilling straight to the center of
things.

Actress Lysa Fox in the production on the Queen Mary played this scene nearly perfectly by performing it straight as if she were saying the most ordinary thing she might say day after day. Some of the others in this production simply acted too much, which can kill a Wellman play before it can puff up to its full poetic confection. Or perhaps I should say, they tried too hard. Like Mad Wu's song in the penultimate scene—

I sleep in the woods
all day, all night;
If I don't finish this song
There's no one around
To tell me I'm wrong;
or, worse, that I'm right.

—there must always be a sort of casual insanity about what is spoken in The Hyacinth Macaw. If the actors take the lines too seriously, they destroy both the poetry and the fun.
I don't think that explains the hostility of the local critics, but it does account for their lack of comprehension. It's not that Wellman's plays are so difficult. They just have to be buoyantly performed in order to succeed—a hard thing to do in a country where acting is still somewhat attached to method. For there is no method to Wellman's sad and joyous madness.