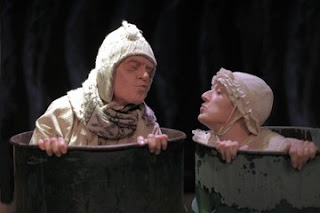 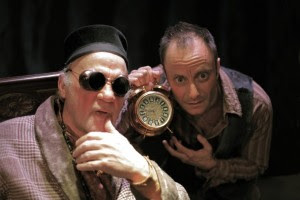 HAMM: We’re not beginning to…to…mean something?
CLOV: Mean something! You and I, mean something!
(Brief laugh.)
Ah that’s a good one!
HAMM: I wonder.
(Pause.)
Imagine if a rational being came back to earth, wouldn’t he be liable to get ideas
into his head if he observed us long enough.

Beware poor viewer (or reader), Beckett seems to warn, of putting too many of your ideas into the often quite meaningless actions of Clov and Hamm of the playwright’s marvelous Endgame. But of course Beckett is also suggesting, perhaps, that the play—carefully looked at—does mean something, a great many things perhaps! Beckett’s equivocation about several issues are at the heart of this play.

Seeing it again, this new performance at the Sacred Fools Theater’s in Los Angeles directed by Paul Plunkett, and reading it again soon after, set me to thinking and rediscovering all sorts of meanings, some new, some old, some likely chewed at many of the thousands of Beckett critics over the years—but perhaps most worth mentioning.

By accident I saw this play, for example, soon after seeing Benjamin Britten’s setting of the medieval miracle play, Noye’s Fludd, so that I recognized in Endgame this time round far more suggestions and references to Noah and his family.

One should never see Endgame (or any Beckett play for that matter), however, as a kind of metaphoric telling or allegorical story of something else. Rather Beckett riddles his play with references to Noah’s ordeal, enfolding them within contemporary issues and other modernist concerns. This is not a play about Noah and his family, but certainly is a work that embraces the myths therein.

Noah’s son Ham(m) (wonderfully played by Leon Russom)—shamed and cursed by his father to be the servant of his brothers for having seen him naked—is at the center of Beckett’s work, enduring his seemingly endless life on earth. Noah lived three hundred and fifty years after the flood, a total of nine hundred and fifty years according to the book of Genesis. And each of the sons lived for hundreds of years also. So Hamm’s crying out for death is obviously no small thing. In the post-holocaust world in which Hamm lives, where life has been completely blotted out—there are no tides, no waves, all is gray—the end is certainly to be longed for.

Hamm’s father, living out his old, old age in a ashbin beside his equally displaced mother, Nell, is called in Beckett’s play, Nagg, suggesting both his propensity to “nag” or scold (he, after all has cursed his own son) and the fact, clearly, that like an old “nag,” an old horse, he has been put out to pasture, so to speak, locked away in a covered ashbin. If one wanted to go further, and Beckett certainly does encourage this, one might play a game of anagrams, transforming Nagg into something like “Noah after God’s grievance,” or “Noah after God’s gift,” depending upon which side of the coin from which one sees oneself. But this is, after all, only a game.

There is no question, however, of both Nagg’s, Nell’s, and Hamm’s memories of rain, water, sails, fins, and other flood-like images which Hamm insists that Clov inspect through the windows high above normal placement, with a ladder and telescope in hand. It is as if they live still in the ark, attempting to spot signs of some vestiges of new life or survival. Nagg and Nell, moreover, remembering before the flood, retell the story of how they almost drowned on Lake Como.

The only animals remaining, humorously, are a three-legged child’s play-dog, a flea, a rat, and, possibly, some gulls and the fin of a passing shark. The animals, along with Noah’s other family members evidently have left long ago to be fruitful and multiply, while Hamm, his father, and his mother have remained behind, unable witness that new green world the others may have discovered.

Clov (Barry Ford) seems the only misplaced figure in the play. Hamm treats him, occasionally like a son, but none of his Biblical sons, Cush, Mizraim, Put and Canaan suggest the name Clov. Perhaps he is the son of the old man of his fiction which Hamm retells day and after day, adding details as he goes along? Whoever he is, he serves, like Lucky in Beckett's Waiting for Godot, as an overburdened, maltreated slave to Hamm.

More likely, Clov is a manifestation of the cleaving process that daily occurs between the two, his name resembling the past-tense of the cleavage which may or may not occur at Endgame’s close. But he is also the matching opposite of Hamm. Both are red-complexioned, but the blind Hamm can only sit while the thin Clov can only stand. Yet despite the abuse that Hamm heaps upon him, Clov has no choice, it appears, but to serve his master.

I think Beckett here is also playing with a wonderful pun, suggesting the perfect relationship of clove to ham, the two generally used in Easter dinners, one all plump asquat the platter with the other neatly studding it (on thinks of Clov’s constant orderliness). In that sense, Beckett has moved away from the intricacies of Noah’s story, but has brilliantly portrayed their lifetime relationship, and hinted at a new hope symbolized by any Easter dinner.

With no immediate possibility of death, trapped in a world beyond the end where, as Clov reminds us again and again, all they can see is “zero”, it is no wonder that these two so suffer the pains of everyday life. Nearly everything around them has disappeared and provisions, including food and pain-killers, are fast running out.

As many critics have agreed, theirs is a world of repetition, a day by day recitation of their sufferings that apparently have no end. As Hamm keeps suggesting, however, it will someday, must someday end, as Nell’s death—if it is truly a death—foretells. Like a bell announcing a funeral, or as in the knelling of a disaster, Nell’s demise demonstrates that despite the “game of dying” Nagg, Hamm, and Clov play each day, a real end is imminent, even if hundreds of years off. Clov’s glimpse of a young boy, a potential Christ (?)—which Hamm immediately describes as a possible “progenitor”—hints at a new world beyond the dead one in which they are trapped.

Posted by Douglas Messerli at 7:45 AM